The studio enjoyed further massive hits with The Jetsons, Wacky Races, and Scooby- Doo, Where Are You!, with Hanna and Barbera remaining at the head of the company until it was sold to Turner Broadcasting in 1991. The pair still continued to consult on new shows until their deaths in 2001 and 2006, respectively, their legacy ensured far before that in the annals of television history. In all, Hanna-Barbera produced over one-hundred and seventy-five shows, as well as numerous animated specials, and their big hits are ingrained in our collective memories. But what of those H-B productions that didn’t hang around? Let’s look at four shows from the 1970s that might have escaped your notice…

The Roman Holidays (NBC, 1972): Along with hillbillies, pilgrim fathers, and Native Americans, one of the rejected ideas for Hanna-Barbera’s first prime-time family sitcom was that it take place in Roman times, with the titanic twosome eventually settling on the Stone Age with The Flintstones. The Roman idea wasn’t completely forgotten, however, and on September 9th 1972, The Roman Holidays debuted on NBC.

Unlike The Flintstones, The Roman Holidays was firmly aimed at the Saturday morning crowd but still retained that family dynamic, with Augustus “Gus” Holiday the star of the show, attempting to live what we’d recognise as a normal modern life in a very un-modern setting. Gus worked at the Forum Construction Company, always wary of his demanding boss Mr Tycoonius, and has to deal with the usual family situations brought on by wife Laurie, their children Precocia and Happius, and their pet lion Brutus. 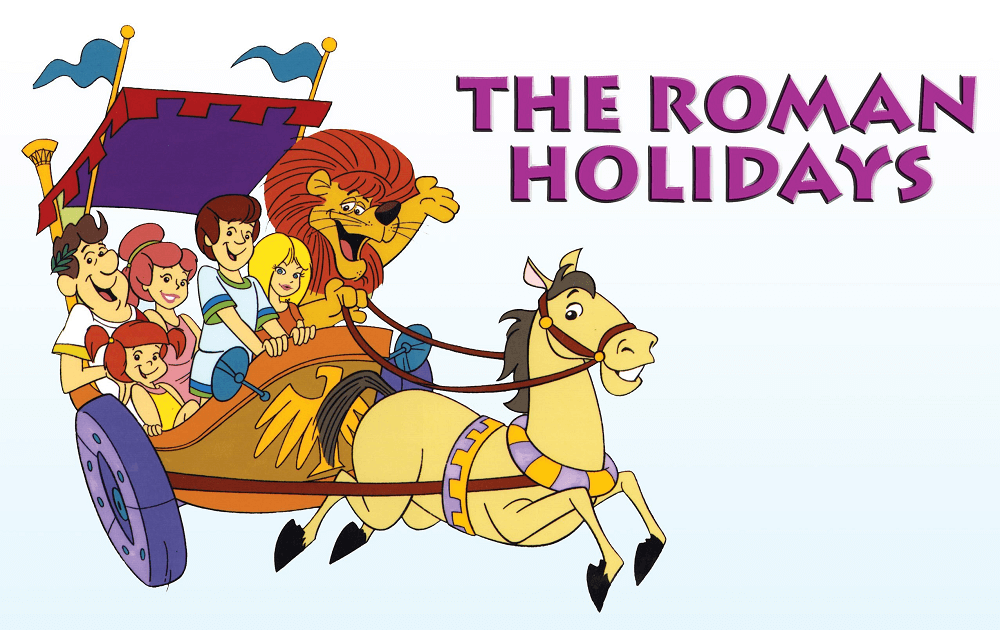 The voice cast was first class, with Wacky Races narrator Dave Willock as Gus, Daws Butler as the lion, and Dom DeLuise as the Holidays’ impatient landlord Mr Evictus (“Evictus will evict us!”). Thirteen episodes were produced, landing Gus in such scrapes as becoming a lookalike for popstar Davey Cassius, a house-swap with a family in Venice, and – of course – trouble at the bowling alley, and the show was accompanied by four issues of a Gold Key comic book (which outlived the show by eight months).

The Roman Holidays was the last of the traditional family-style animated sitcoms to come from Hanna-Barbera who had debuted the prime-time Wait Til Your Father Gets Home the same year. Future attempts with the formula would fall back on The Flintstones or inject a sense of peril and adventure made popular by a little show with a stupid, crime-solving dog as its star…

Speed Buggy (CBS, 1973): Scooby-Doo, Where Are You! was a massive success for Hanna-Barbera and CBS and it was no surprise that the network – and its rivals – ordered several similar shows, both from H-B and competing studios. Hanna-Barbera had already reached into its bag of tricks to produce The Funky Phantom in 1971 and this was joined two years later by Speed Buggy, a twist on the formula in that the “Scooby” character wasn’t a dog, he was a car.

While taking part in racing competitions around the world, Speed Buggy (that was his name, as well as his job) solved crimes with the assistance of hip teenagers Debbie, Mark, and Tinker. Voiced by industry legend Mel Blanc, Speed Buggy fills the wacky hero role played by Scooby in the earlier show (and by a civil war ghost in The Funky Phantom), with Mark being a mixture of Fred and Velma, and Debbie a combination of Fred and Daphne. Tinker – the mechanic – was pure Shaggy, even down to his look, a shock of ginger hair accompanying his green jacket. 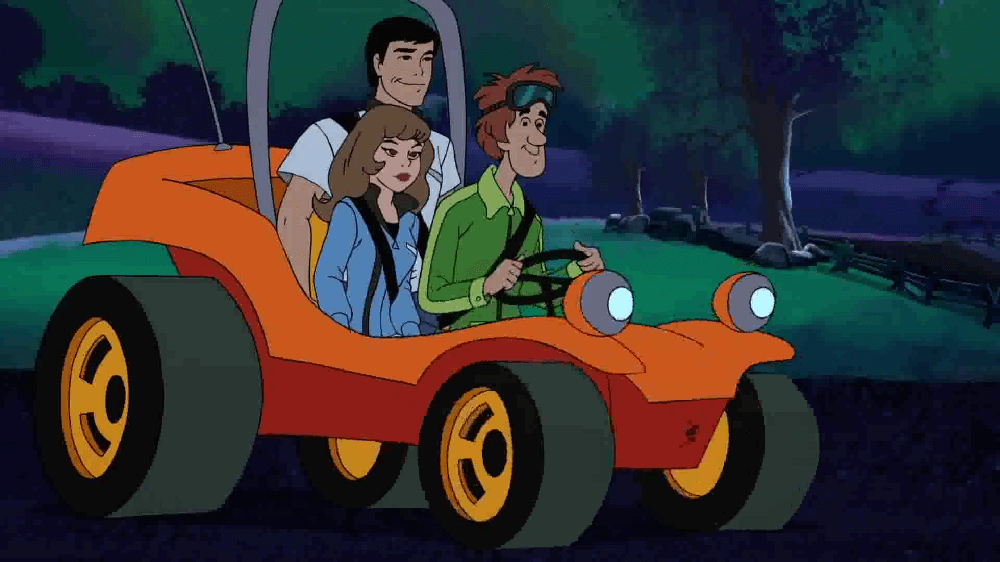 The inspiration for the show lay with Disney’s 1968 hit The Love Bug, although the star of that film – Herbie – didn’t so much solve crimes as act as a prototype for Stephen King’s Christine, and the general grooviness of the times soaked through the show. Sixteen episodes were produced, designed to be shown in any order in syndication, which saw the foursome foil such crimes as gender-based slavery, an attempt to manipulate the global energy markets, and cattle rustlers.

Speed Buggy didn’t return for the 1974 season – fellow Scooby clone Goober and the Ghost Chasers had proved more popular and was renewed for a second outing – but it did receive nine issues of a comic book from Charlton Comics in 1975 and 1976. Speed Buggy returned as part of Scooby’s All-Star Laff-a-Lympics in 1977 and the show is available on DVD as part of Warner Archives’ manufacture on demand range.

Devlin (ABC, 1974): Move over Evel Knievel, here’s Ernie Devlin! Yes, Hanna-Barbera had their own version of the king of motorcycle stunts when they launched Devlin in September 1974, although it wasn’t quite the show it was supposed to be, mostly because of those pesky grown-ups!

H-B had initially planned the show to be called Wild Wheels, with “Dare” Devlin its devil-may-care hero, but concerns among the higher-ups at ABC brought about a change of title, as well as the addition of heavy-handed safety messages threaded throughout. Still, the retooled effort still featured the adventures of a stunt motorcyclist and his younger siblings, Tod and Sandy, and there were still plenty of thrills to be found, even if we had to be told not to copy them at home. 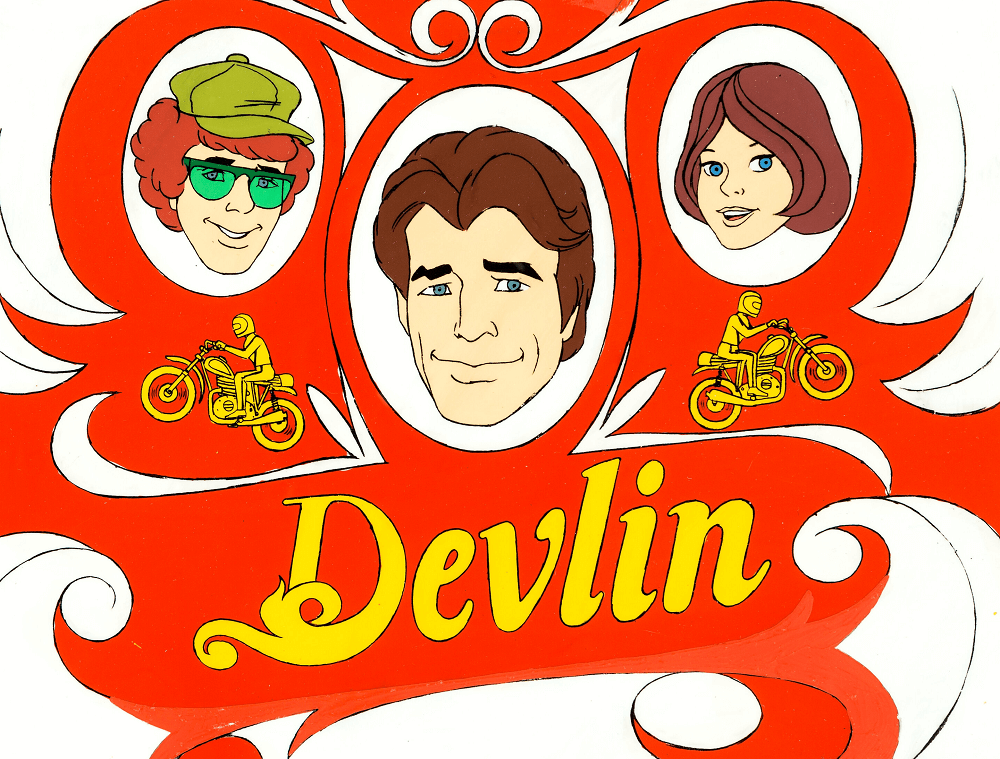 Devlin, voiced by Michael Bell, worked for Hank McSummers’s travelling circus, taking his outrageous escapades to the people and having adventures along the way. Tod (Mickey Dolenz) and Sandy (Michelle Robinson) helped their big brother as he dealt with a case of the jitters, a runaway lion, tornadoes, an obnoxious rock singer, and many other scrapes, all presented in the stilted animation we grew to love.

Devlin ran for sixteen episodes before jumping his last bus, although as far as we know he’s still out there, and has made non-canon (?) appearances in both Harvey Birdman, Attorney at Law and Jellystone! in recent years. Evel Knievel may have famously broken every bone in his body but Devlin, man, he was like something out of a cartoon…

CB Bears (NBC, 1977): In the mid-1970s, Hanna-Barbera attempted an experiment, producing several new anthology shows, anchored by a title feature but consisting of up to half a dozen unconnected concepts. It wasn’t a new idea – it had been done with some success in the 1960s – but it had faded out of fashion in favour of full-length episodes starring strong characters with little need of a supporting feature. The New Tom & Jerry Show had been the first such endeavour in 1975, the titular scrappers joined by The Great Grape Ape Show, but 1977 brought four new showcases, led by Fred Flintstone and Friends.

Airing at 8am eastern on Saturday September 10th, CB Bears was the first of the new shows to debut, and was built around the adventures of three bears, private detectives who disguised themselves as trash collectors and who received assignments from an unseen dispatcher (by CB radio, because trends) in the manner of Charlie’s Angels. Bump Bear (the others were Hustle Bear and Boogie Bear) even had hair like Farrah Fawcett, and the ursine trio were joined by the Happy Days-inspired Heyyy, It's the King!, only with The Fonz-like King played as a lion and in high school for some reason. 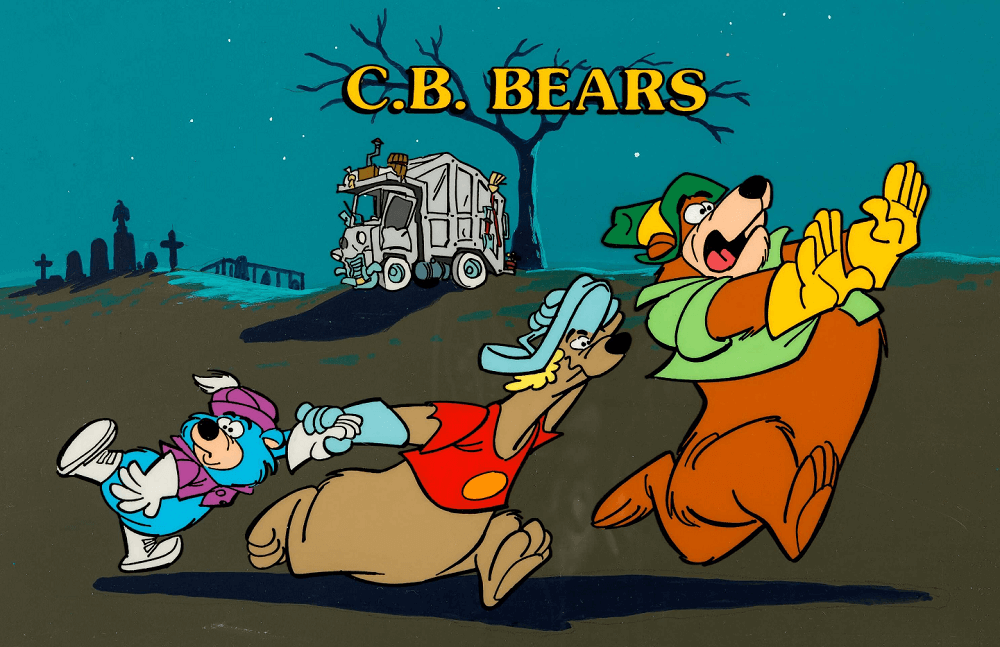 Other features included the Roadrunner-like Blast Off Buzzard (a buzzard chasing a snake, with hilarious results), Posse Impossible (backdoored in the final episode of Hong Kong Phooey), and Undercover Elephant, a riff on Mission: Impossible but with an elephant and a mouse in place of Peter Graves and Greg Morris.

The final segment was Shake, Rattle & Roll, the story of three ghosts who run The Haunted Inn, a hotel for other supernatural creatures, and have to escape the attentions of ghosthunter Sidney Merciless, and needless to say it was an eclectic, wild mix, with no coherent theme connecting the features. Just thirteen hour-long episodes were produced, some of which were released on VHS in the late 1980s, and Heyyy It’s the King! enjoyed a run on BBC TV in the early part of that decade, but largely CB Bears remains one of H-B’s most forgotten shows, with only bits and pieces showing up on YouTube now and then.

The Skatebirds (CBS, 1977): Debuting on the same day as CB Bears, but over on CBS, was The Skatebirds, a return to the live-action, costumed capers of The Banana Splits but this time without the character-designs of Sid and Marty Krofft. In place of the psychedelic animal band were Knock-Knock (a woodpecker), Satchel (a pelican), and Scooter (a penguin), three roller-skating birds eternally taunting Scat Cat, voiced by Scatman Crothers.

The Skatebirds segments were used to wrap around for other features, led by The Robonic Stooges, an attempt to parlay the slapstick brutality of The Three Stooges into Six Million Dollar Man-inspired comedy adventure yarns. The Stooges – Curly, Moe, and Larry, of course, but voiced by Joe Baker, Frank Welker, and Paul Winchell – were given their assignments by the unseen Agent 000, boss of the Superhero Employment Agency. 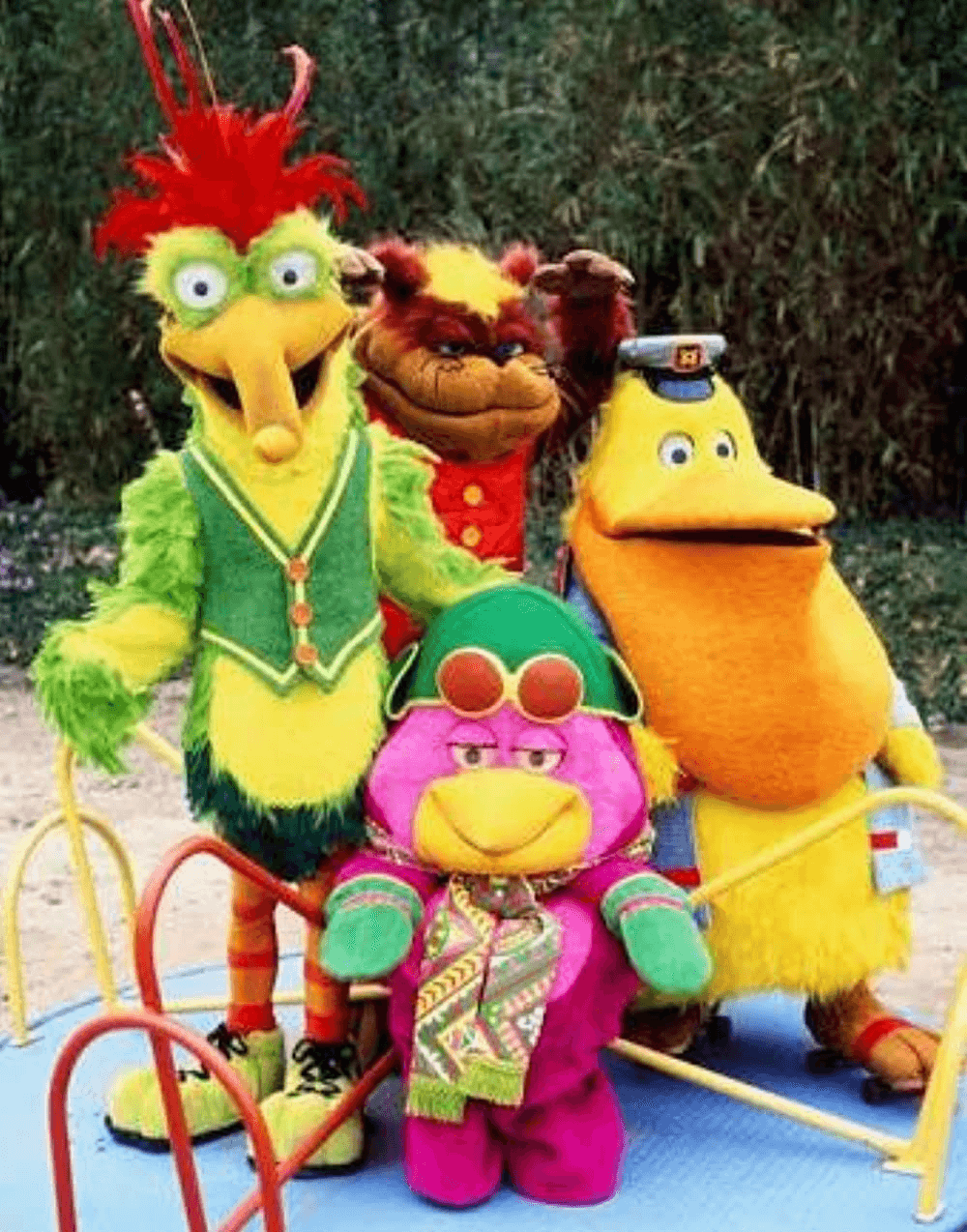 The Robonic Stooges were joined by Wonder Wheels, a shapeshifting motorcycle who helps his human pal Willie Wheeler (voiced by Mickey Dolenz) solve crimes, alongside Willie’s girlfriend Dooley. As if that weren’t enough crimefighting, Woofer & Wimper, Dog Detectives – a shortened version of the previous year’s Clue Club – were on hand to bumble their way through mysteries, with the help of sympathetic teens Larry, Pepper, DD, and Dottie.

The final segment was the live-action Mystery Island, which told of an airplane sucked down to the titular location by the evil Dr Strange and his tractor beam. Pilot Chuck Kelly, computer expert Sue Corwin, her younger brother Sandy, and his robot pal POPS had to avoid the sinister plans of Strange and try and find their way off the island. The variety hour lasted for sixteen episodes and was quietly retired but The Robonic Stooges returned the next year in a half-hour show of their own, again lasting for sixteen episodes. There’s never been a DVD release of any of the shows featured on The Skatebirds but the rollerskating avians did receive a boardgame courtesy of Milton Bradley in 1978 which is surprisingly affordable on eBay…

Next on Titans of Telephemera: Hanna-Barbera moves into the 1980s with t-shirts, bananas, and golden lances!