To twenty-first century eyes, the off-the-wall humour of Rowan and Martin may seem an acquired taste but the TV viewers of 1968 couldn’t get enough of their Laugh-In on NBC, outrating every other show on the list. Underneath, the final season of Gomer Pyle presented more of the incompetent side of the US military, which must have been a comfort to mothers of those poor unfortunates being drafted to fight in Vietnam, but there was succour to be found in warm blanket shows like Bonanza and Andy Griffith spin-off, Mayberry RFD, and Lucille Ball returned with a brand new show, Here’s Lucy.

Genre fans were well-catered for, even with The Avengers, I Spy, The Saint, and Star Trek all entering their final seasons, with Mission Impossible, Bewitched, and new hit The Mod Squad all doing well for ABC, while I Dream of Jeannie was a top thirty show for the peacock network, where Columbo made its bow. Other new shows of interest to those of a more fantastic bent were Irwin Allen’s Land of the Giants and spies meet cowboys actioner The Wild Wild West, but what were the kids watching as the 1960s raced to a climax? This is the story of 1968’s Saturday morning cartoons…

The Batman/Superman Hour (CBS): Marking the first appearance of Batman in animated form (Superman, of course, had been gloriously brought to life by the Fleischer brothers in the 1940s), The Batman/Superman Hour spun out of Filmation’s The Superman/Aquaman Hour of Adventure from 1967, and the studio had initially planned to expand the show by adding wacky hero Metamorpho to the mix. However, when the rights to Batman became available, they soon jettisoned any plans – and Aquaman – in favour of the Caped Crusader.

The role of Batman/Bruce Wayne went to Olan Soule, best known for a panoply of roles for Jack Webb’s Mark VII Productions, with Casey Kasem voicing Robin/Dick Grayson. The pair also voiced Alfred and Chief O’Hara, respectively, with all other parts being picked up by Jane Webb and Ted Knight. 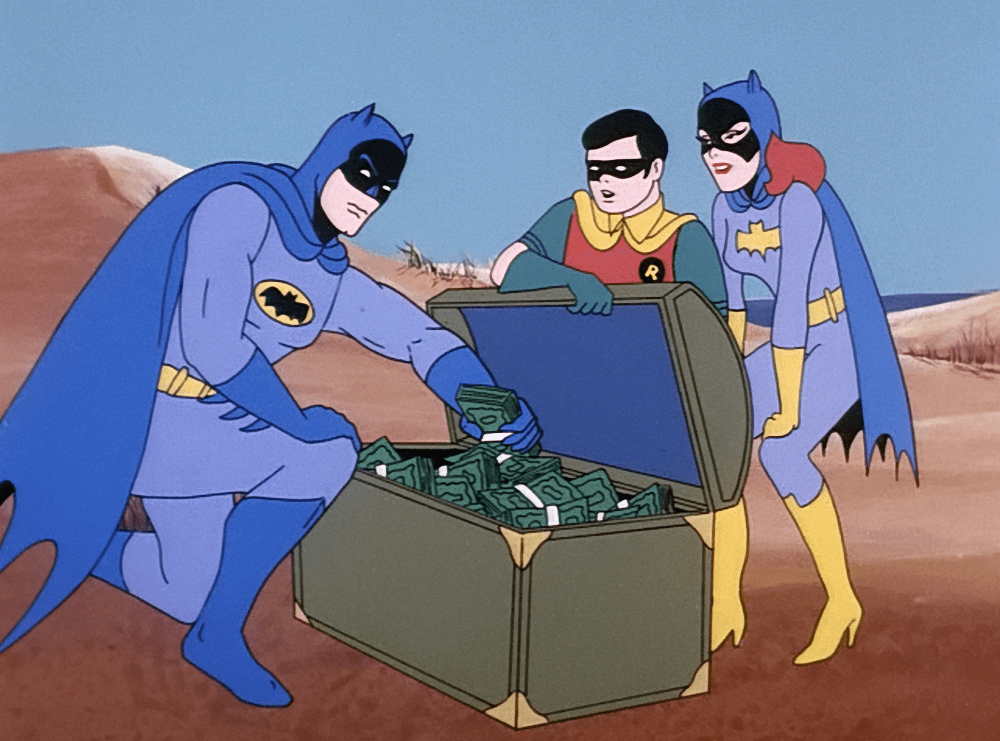 The tone of the Batman shorts – each episode of the two had one thirteen-minute story, split into two halves, and a separate six and half minute tale – was similar to the live-action show and matched the boy’s own adventure style of the accompanying Superman and Superboy shorts, with the seriousness of the Bronze Age of comics still years away.

For the 1969 season, Superman joined Aquaman on the scrapheap and the renamed Batman with Robin the Boy Wonder was shortened to just thirty minutes. Consisting of repackaged stories from The Batman/Superman Hour, the show only lasted for a single season, and it was 1973 before DC Comics’ heroes made their next TV appearance, when Super Friends made its bow.

Fantastic Voyage (ABC): In the 1966 sci-fi flick Fantastic Voyage, a CIA agent and his crew are shrunk to microscopic size and sent inside the body of a defecting Soviet scientist to repair an injury to his brain. Despite its scientific inconsistency, the film was a big hit for Twentieth Century Fox, more than doubling its considerable $5 million budget at the box office and making a star out of Raquel Welch. It stood to reason that Fox would want to capitalise on the success of the film and, rather than return to the often tricky and expensive techniques needed to bring the further adventures of the Combined Miniature Defense Force to the screen in live action, they decided to partner with Filmation for an all-new animated show.

The TV version of the CMDF was comprised of just four adventurers - Commander Jonathan Kidd, biologist Erica Lane, scientist Busby Birdwell, and Guru, a "master of mysterious powers" – and each week they would be shrunk down to miniature size for a maximum of twelve hours, travelling inside droplets of water, mystical crystals, and Guru’s own brain, as well as combatting tiny aliens, tiny sentient plants, tiny living toys, and all manner of threats, the defeat of which always requires them to become very, very small. 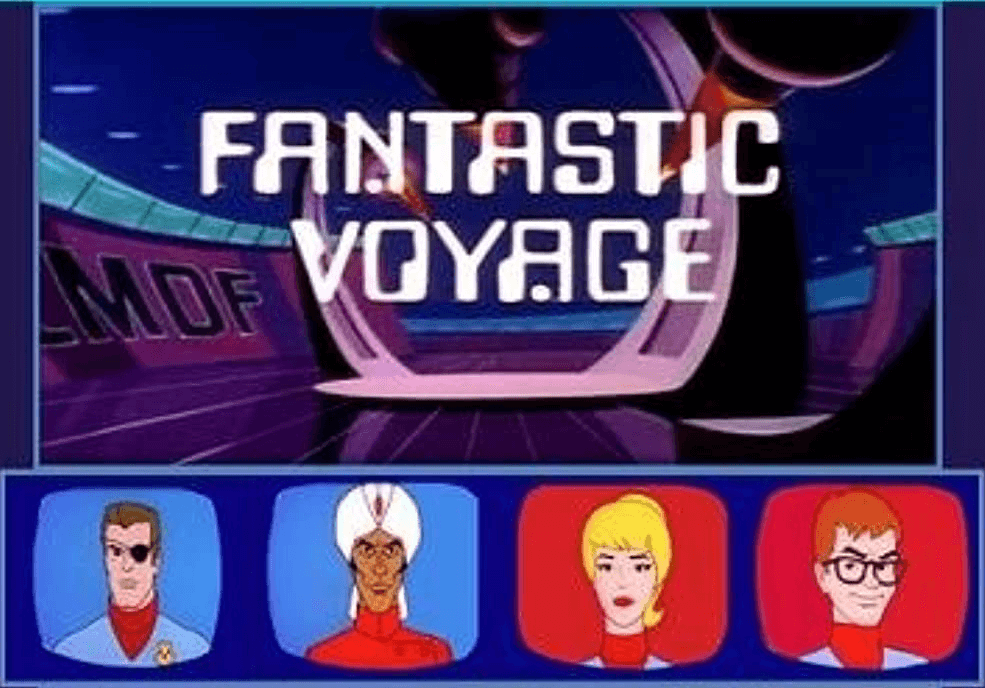 Filmation’s usual voice cast of Marvin Miller, Ted Knight, and Jane Webb were pressed into service, and seventeen episodes were produced, with all but the opening “The Gathering of the Team” designed to run in any order, as was the way with the vast majority of US animated shows at the time. “The Gathering of the Team” hit screens on September 14th 1968, slotted between Spider-Man and Journey to the Center of the Earth, and as part of a block which also included The Fantastic Four, giving American children a huge dilemma as to which channel to fix their dial to on Saturday mornings.

Just one season was produced, re-run in 1969, although Gold Key did produce two issues of a tie-in comic book and the Aurora Model Company manufactured a scaled facsimile of the Voyager craft used in the show. This hit stores shortly before the show was cancelled and was only produced in short runs, leading to high values on the collectors’ market today. The complete series was released on DVD in the UK in 2011.

Wacky Races (CBS): While not strictly Telephemera in that everyone remembers the show, Wacky Races was on the air for such a short amount of time that it risked falling into the same memory hole as many of the shows featured in this column. However, a mixture of extraordinary characters, some incredible joke set-ups, and a format that rewards repeated watching – because, seriously, who can remember who won what race? – gave it life beyond its seventeen-episode run.

The concept for Wacky Races was developed as part of the celebrity game show Hollywood Squares, and it was planned that the contestants would bet on which wacky racer would win the short race inserted into each episode. That idea was dropped but Hanna-Barbera thought the concept had legs and spun it off into its own show, which debuted on September 14th 1968.

It would have simple – as with the later Laff-a-Lympics – to use Hanna-Barbera’s existing cast of cartoon characters as speedsters for the show but an all-new roster was created, giving the world such delights as The Slag Brothers, The Creepy Coupe, Penelope Pitstop, and – of course – Dick Dastardly and Muttley. The premise was simple: the competitors race an unusual, cross-country course (ala the 1965 movie The Great Race), and Dick Dastardly cheats only to have imminent victory snatched away at the last minute. 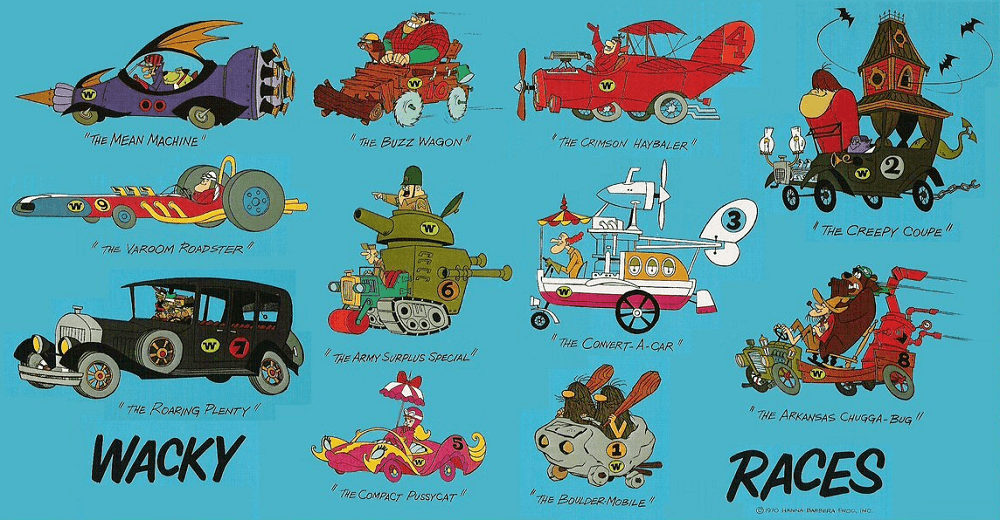 Across the thirty-four races (two per episode), Dastardly and Muttley failed to win a single event, with all of their rivals taking the chequered flag on three or four occasions. Some entrepreneurial sort worked out a league table, with points awarded for first, second, and third; The Slag Brothers in The Boulder Mobile, by virtue of a massive eight second places, take the crown from Rufus Ruffcut and Sawtooth in second.

The final episode aired on January 4th 1969, but the show lived on in almost constant repeats, making household names of Dastardly and Muttley, and providing Pitstop with the chance for her own spin-off show, The Perils of Penelope Pitstop, from which the villainous Hooded Claw became a playground impression to die for. Wacky Races was rebooted in 2017 on the Cartoon Network with a smaller cast across seventy-eight episodes but it failed to capture the charm of the original, a Hall of Fame TV show on any criteria.

The Adventures of Gulliver (ABC): An attempt to update Jonathan Swift’s 1726 novel Gulliver’s Travels, The Adventures of Gulliver was Hanna-Barbera’s new animated adventure yarn for the 1968 Fall season. The star of the show was Gary Gulliver, out on a treasure hunting voyage with his dad, only to wind up shipwrecked with his dog Tagg on a mysterious island, which turns out to be Lilliput.

Those of you familiar with the original tale will know that Lilliput is inhabited by tiny people, and they initially regard Gary as a giant threat, later making friends with the boy behemoth when he rescues their king from an eagle. The Lilliputians give Gary shelter and promise to help him find his dad, kicking off seventeen episodes of high adventure and low ceilings. 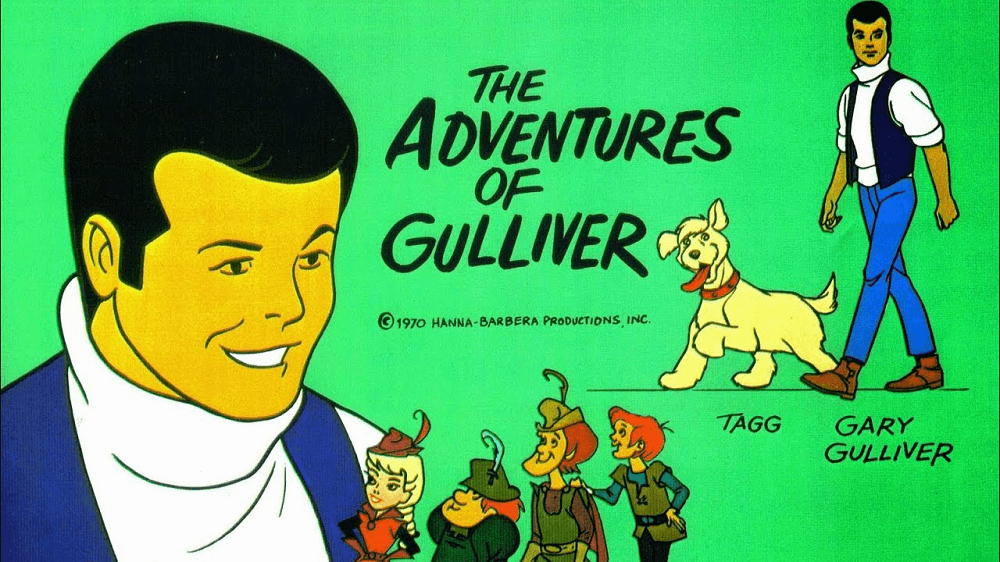 Rather than take the customary approach of episodes that can be shown in any order, to make syndication easier, The Adventures of Gulliver has a continuing narrative, each episode bringing Gary tantalisingly closer to finding his father (and escaping the clutches of the mutinous cur that caused the shipwreck in the first place).

However, given there was no second season – and, really, these kind of shows never had second seasons – the story ends with Gary and Tagg still marooned on Lilliput, the young boy destined never to know the love of an adequately-sized woman. The Adventures of Gulliver did return in repeats and in 1970 it was cut into segments to be inserted into The Banana Splits and Friends Show (but that’s a story for another year…)

The Archie Show (CBS): You kids think you’re hip with your Riverdale, eh? What if we told you that Archie Andrews was running around on TV screens almost fifty years earlier, joined by Betty, Veronica, Jughead, and the rest? Okay, there’s no gang wars and serial killers, no demonic possessions and doomsday cults, no underground gambling dens and illegal prison fight clubs, but it’s basically the same, okay?

The Archie Show was a response to the success of The Monkees, with the Riverdale teens forming a band called The Archies. First appearing in the comic book Life with Archie in April 1967, the musical project would reach its apogee with “Sugar, Sugar,” a number one hit across the world and the first time an animated act had achieved that feat. In reality, the musicians playing on the record were paid session artists, with Ron Dante (of New York band The Cuff Links) on lead vocals. 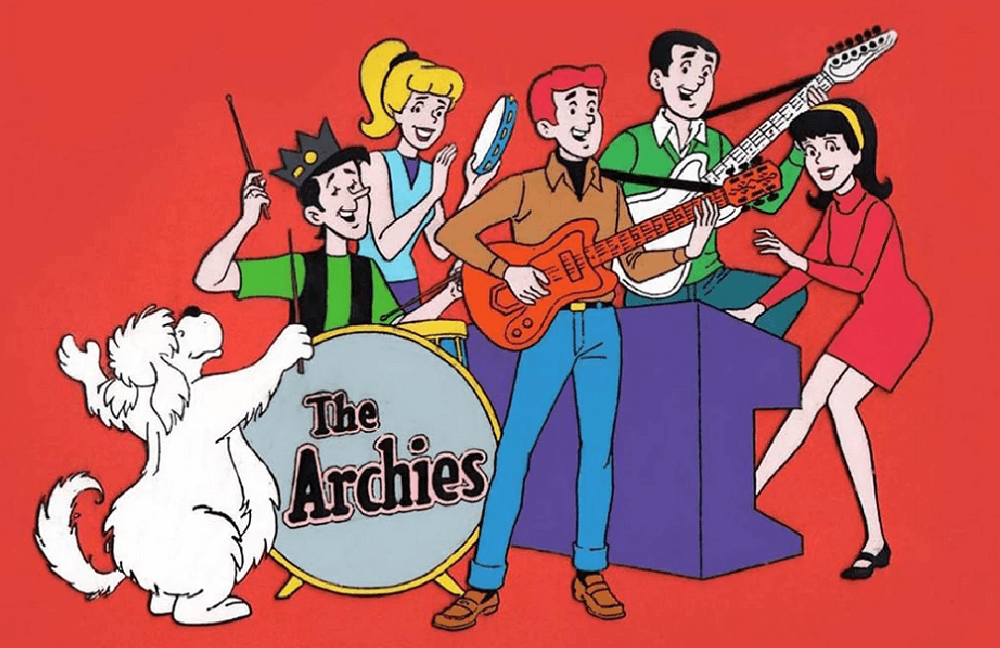 The format of the show had two Archie segments separated by the “dance of the week” and the “song of the week,” and the show was a hit with young kids who laughed along with the gang, voiced by Filmation’s regular cast of voice artists, including Dallas Mackennon as Archie, and Jane Webb as Betty and Veronica. As in the long-running comic book series, much of the action revolved around Archie’s ongoing inability to choose between the girls and Jughead’s eating problem.

In 1969, the show was expanded to include Sabrina the Teenage Witch, and further retooled in 1970 with the addition of live-action segments. Its job to sell music to teens and tweens done by 1971, the Archie gang then took over a TV station for Archie’s TV Funnies. Filmation kept producing new Archie shows until 1978 and over eighty years after Bob Montana created the characters, the kids of Riverdale – now with added superpowers – keep finding their way into American homes.

Next on The Telephemera Years: It’s 1984, with motorbikes, fantasy, and George Clooney in E/R?!?