Joining the schedules for the new season were the surreal adventures of The Monkees, Quinn Martin’s alien drama The Invaders, more superheroics in the shape of The Green Hornet, and another Irwin Allen show, as The Time Tunnel opened its portal. Oh, and a little show called Star Trek began its run on NBC. While adults and children may have thrilled to some of the campy fun on offer, the networks also offered a slate of programming especially for younger viewers, with the Banana Splits, Rocky and Bullwinkle, Underdog, Atom Ant, and Secret Squirrel the big hits of the time. But what of those children’s shows that didn’t linger long in the collective memory…

The King Kong Show (ABC): A co-production between American studio Rankin/Bass and the Japanese animators at Toei, The King Kong Show ran for three seasons from 1966 but hasn’t left quite the mark that the later Hanna-Barbera Godzilla cartoon did, with or without Godzooky. 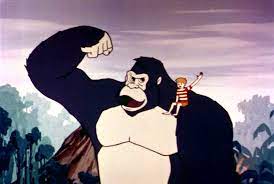 With character designs by infamous EC Comics artist Jack Davis, The King Kong Show’s main feature saw the giant ape befriending the Bond family, who were worldwide adventurers, with Kong acting as a protector of humanity. As was often the way, there was a back-up feature entitled Tom of T.H.U.M.B., parodying the spy craze of the time, which saw a secret agent reduced to just three inches tall.

The first eight episodes are available on DVD through Sony, but you’ll have to trawl video sharing sites for the rest, including the debut of Mechani-Kong, the not-at-all MechaGodzilla-inspired robot ape. 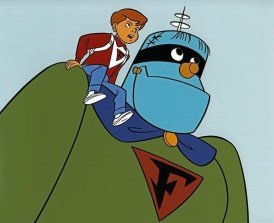 That group were the trio of Multi-Man, Fluid Man, and Coil Man, who posed as a Beatles-esque band in between receiving assignments from their handler, Big D. The Impossibles were initially called The Incredibles, but the name was changed late on in production, and utilised the considerable voice talents of Paul Frees, Hal Smith, and Don Messick.

Just eighteen episodes of Frankenstein Jr & The Impossibles aired between September 1966 and January 1967, although the Frankenstein Jr portions were resurrected in the mid-1970s for a run with Space Ghost, and a single issue of a comic book was released by Gold Key as a tie-in. The complete series is available from the Warner Archive Collection.

The Super 6 (NBC): From DePatie-Freleng Enterprises, who had hit big on their departure from Warner Brothers with the Pink Panther cartoons, The Super 6 was another attempt to cash in on the Batman craze, with the spoof superhero group working as heroes for hire for Super Services Inc. 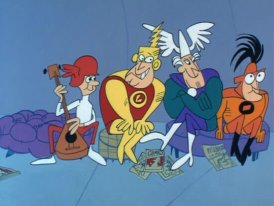 This featured a three-headed set of Siamese triplets, one of which was Chinese, glorying in the names Weft, Wight, and Wong, voiced by Daws Butler, and Paul Frees, and doesn’t fare well in more enlightened times. Nevertheless, the entire The Super 6 series, including The Brothers Matzoriley, is available on DVD and, really, what else are you going to do with your time?

Dino Boy in the Lost Valley featured a young lad named Todd, who parachutes out of a crashing plane only to land in a mysterious South American valley, where dinosaurs and cavemen roam, alongside strange creatures that surely never existed in our pre-history. 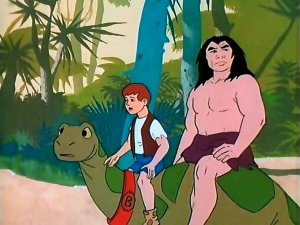 Todd, who was voiced by Johnny Carson (no relation) and was soon dubbed Dino Boy by his caveboy friend Ugh, tried to survive in this new dangerous world, and by the end of his eighteen-episode run (the final two episodes of the twenty-episode series were pure Space Ghost affairs) he was no nearer reuniting with his parents, and presumably still wanders the Lost Valley. The complete series, with the Space Ghost and Dino Boy in the Lost Valley segments, was released by Warner Bros in 2007.

Cool McCool (NBC): Created by Batman creator Bob Kane, Cool McCool was a riff on Get Smart, featuring a trenchcoated spy who more often than not solved his cases despite his sheer comic ineptitude. Directed by the mysterious Number One - whose face was never glimpsed, Dr Claw style – McCool would foil the schemes of such villains as The Rattler, Dr Madcap, and Jack-in-the-Box, all while trying to avoid the amorous attentions of Friday, Number One’s frumpy secretary. 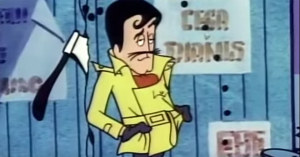 In between two Cool McCool adventures was a Komedy Kops segment, featuring the secret agent’s father, Harry, who was a beat cop in his youth and no more suited for that role than his son was for spying, even with the help of his brother Tom and Dick.

Produced in Australia for King Features, twenty episodes aired between September 1966 and January 1967, Bob McFadden voiced both McCools, patterning him after Jack Benny, with Chuck McCann providing just about every other voice on the show. You can see their work on DVD, even in the UK where the show never aired on TV.

The Mighty Heroes (CBS): You’d think CBS would be satisfied with the superhero adventures of The Impossibles on Saturday mornings, but that’s because you’re not living in the middle of Batman-fever, and so the existence of The Mighty Heroes actually makes perfect sense. Created by Ralph Bakshi, three years before starting work on Fritz the Cat, The Mighty Heroes detailed the adventures of the five costumed protectors of the city of Good Haven, who were as clumsy as they were formidable. 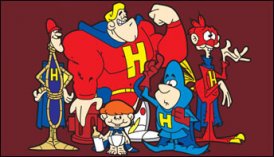 Consisting of Cuckoo Man, Diaper Man, Rope Man, Strong Man, and Tornado Man, The Mighty Heroes were summoned by fireworks whenever the city needed help to escape the clutches of such villains as The Ghost Monster, The Frog, The Shrinker, or The Enlarger. While the quintet would initially make a mess of things, they’d always come good by the end of the episode.

Originally introduced as a segment on The Mighty Mouse Playhouse, The Mighty Heroes was given its own slot, with a classic Mighty Mouse cartoon sandwiched in between the two halves of the Heroes’ adventure. Most of the voices were provided by Lionel Wilson and Herschel Bernardi (who also provided the Jolly Green Giant’s “ho, ho, ho!”), and twenty episodes were produced, before Bakshi left Terrytoons to work on Spider-Man.

Next time on the Telephemera Years… 1990!