Wizards of the Coast, who produce the world’s most popular roleplaying game Dungeons and Dragons, have announced a ‘magical school’ inspired setting for their game today.  Strixhaven A Curriculum of Chaos will detail a multiverse spanning magical college. The reality breaking school features five colleges, each founded by an elder dragon: Silverquill, Prismari, Witherbloom, Lorehold  and Quandrix. Each college is in constant conflict with each other, of course.

If this all sounds a little familiar, it may be because Strixhaven started out as set for Magic The Gathering.  We can’t think of any other reason why a setting for a magical college might seem familiar.

The book won’t be out till November 16th, but in a surprise move, Wizards of Coast have already released playtest rules on their Unearthed Arcana website here. Typically these playtest rules don’t feature much in the way of setting information in them, but they’ve decided to make an exception here.  Pre-orders for the book are already available on Amazon and we expect  the book will contain new character options, monsters, mechanics, story hooks and fabulous art-work.

Let's take a sneak peek at the normal art cover (without any logos). 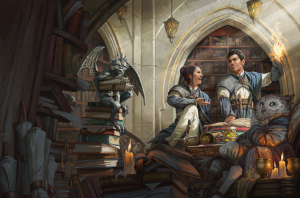