One of the things that has kept the world of Warhammer 40,000 fresh in the minds of fans is Games Workshop’s current commitment to an ongoing narrative. The current storyline is Arks of Omen, which takes place on 40K’s own version of a haunted house; the space hulk. These massive space-ships are cosmic flotsam; bits of ruined ship tossed together by the hellish energies used in faster-than-light travel.

The new campaign requires space-ship themed scenery to run the scenarios. You need quite a bit of it, but if you pick up Kill Team: Into the Dark  and the latest Killteam expansion, Kill Team Shadowvaults, you’ll have enough to run the campaign. This, coupled with some very juicy models (more on that later) means that Shadowvaults is this years ‘must-buy’ Games Workshop expansion; we only get our hands on it because GW sent us a copy for review.

Kill Team Shadowvaults is an expansion for the current edition of Kill Team – you will need the basic rules, or a starter set to get full use out of this. Kill Team is a tactically deep small scale skirmish game. You only need ten models, an hour and a friend to play it, though fancy terrain is a nice bonus.

Firstly, the box has 45 pieces of Gallowdark terrain; this is the haunted space-ship stuff. Hatches, sentry turrets, little robot things, security panels, cameras, crates etc.  The doors swing open, it’s a very flexible set and it’s the sort of set up that you can use in other sci-fi games. It’s great stuff and almost makes the box picking up for this alone.

We get two full Kill Teams, as well as the usual rules required to run these teams.  The Hierotek Circle are Nercons; crazy aliens robots that are the remnants of a long dead and incredibly powerful alien race. The kit provided will make up to eight necron models of various types, from frontline troops to highly specialist pieces. It’s a solid kit with a lot of options and the Necrons themselves are stylish and freaky.  Rules wise, they’re hard to kill;  the living metal power means they heal easily, they can shrug off damage and they have powers that make managing your team’s actions very easy. They have good action economy and some neat weapons. You’ll probably want to build and use the Deathmark model as this sniper can pretty much take out anything in the game.

The big draw of this box are the Kaskrin Kill Team. Kaskrin are the elite units of the Astra Militarum (Imperial Guard), the human foot-soldiers and perennial red-shirts of this grim dark world. Kaskrin are meant to be tough and the kit lets you build ten of these troopers. They’re heavily armed and armoured humans, who look like they’ve stepped out of a military sci-fi novel.

The kit let’s you build a Combat Medic, Demo-trooper, Sharpshooter, Gunner, Recon-trooper, a Vox Trooper and Sergeant, as well as some regular troops.  They don’t hit as hard as some options in the game, and they aren’t as tough, but they are very flexible. They have a range of abilities and special equipment that let’s you plan on the fly, taking objectives and working together to take out foes bigger than they are. They play off against the Necrons very well, as you’d expect.

Shadowvaults may be a challenge to find at the moment, but well worth seeking out. 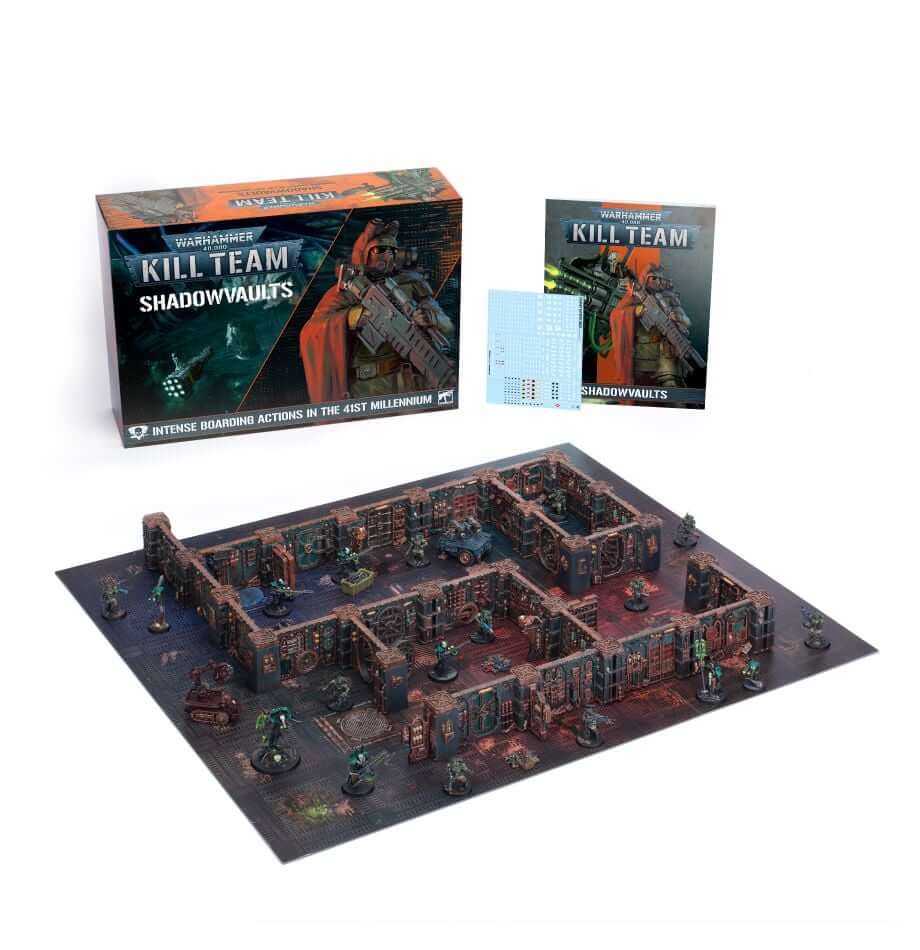