We’ve waxed lyrical about how much fun Games Workshop’s Kill Team is before. This miniature skirmish game has a low model count but is tactically deep, meaning that you can play it fairly quickly.  Games Workshop have produced a number of starter sets for the Kill Team, usually with a strong back story and scenery to match. For example, in a war torn city or the engine room of a starship.  Kill Team: Into The Dark moves the action to one of Warhammer 40,000’s more intriguing settings; the space hulk. And it's latest game the good folk at Nottingham sent across to Starburst Towers for us to take a look at.

Space hulk’s are twisted amalgamations of various galaxy roaming star-craft. The notion is that warp travel is dangerous and sometimes ships get fused together in vast lumps. In   Kill Team: Into The Dark, the hulk is ominously called The Gallowdark, a vast and claustrophobic nightmare of sprawling corridors and tight spaces. To represent this, the box comes with a large, double sided play-mat and over fifty bits of scenery so you can make lots of little rooms for your toy soldiers to have fights in. The doors open and the various weird bits of spaceship slot together well. This is all compatible with previous Games Workshop terrain, though you may need to be creative depending on the parts. They’re well detailed and are fun to paint. And yes, if you had enough of these kits you could make 3D board for vintage GW games such as Space Crusade or Space Hulk.

We get two Kill Teams to play with here. These are Games Workshop models, so they assemble cleanly, are highly detailed and come with some fun options.  First off are the Kroot Farstalker Kinband. These are bird-like alien cannibals and they look like wild warriors from space. They wield some savage looking weapons, that blend ‘high-tech yet crude’ very well. One of the models come equipped with a pet bird of prey. Two of the models are alien dogs; and they look fab, though we wouldn't pet either of them.

In play, the kinband is brutal and tactically interesting. They’re good at getting out of combat and have two special abilities, Mercenary Contract and Poach that make them very flexible in terms of use, this makes them a great option for newer players.  They move quickly, are decent in ranged combat, better in close combat and have good heavy weapon options. They’re designed to work as a pack and this makes them a fun choice.

The Imperial Navy Breechers are the other faction in the set. They don’t come with alien dogs, but they do have a robot CAT.  The Breechers are humans who specialise in fighting in space ships. We’ve only seen a few models like this in Warhammer, this is a bit of a shout out to old Space Fleet  and Rogue Trader games. It’s nice to see this faction get some love after so much neglect. They wonderfully detailed models and fun to convert and paint.  Rules wise, they’re specialised for close quarters movement. They can seal hatches, cover each other very well and co-ordinate as an elite, tactical squad.

They also have this great heavy weapon called the Navis Las Volley, which you will use a lot.

(And in case you’re wondering, yes you could field these units in a game of regular Warhammer 40,000 alongside the models from the Rogue Trader  Kill Team to form a sort of grim dark away team. Alas,

it’s not that competitive right now).

Rules wise, this works well as an introduction to the game, similar to the previous Kill Team: Octarius set.  Hero focused, strategic play with enough tools to make the game quick and easy to play. The measuring system for the game is still a little weird (it’s symbol based rather than using numbers) . This set adds rules for fighting through doors. It also brings back the ability for units to ‘cover’ each other through the guard action. (Essentially you can activate a model to act when something else acts). Both of these are welcome and add to the tense and tight fighting action of the game.

It's pretty, it works

If you’re thinking about getting into Kill Team or you’re looking  for a gift for the Warhammer fan in your live, this is a lovely set. The rules are tight, the models are lovely and the scenery is fabulous. 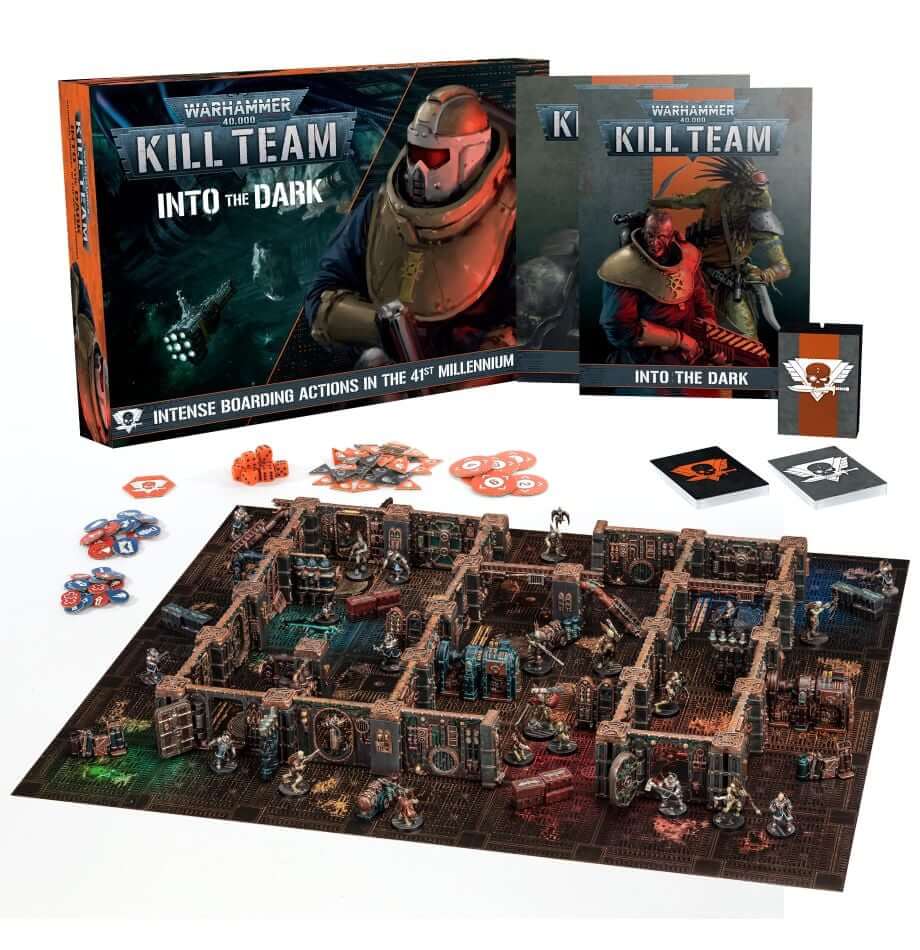