Critical Role fans have gotten a sneak peek at the  character art for The Legend of Vox Machina, the crowdfunded cartoon that was so succesful it became an upcoming Amazon Original animated series.

Phil Bourassa (Young Justice, Batman: Bad Blood, Justice League) is the lead character designer. The show is based on the first campaign of the popular Critical Role show, which features voice actors playing Dungeons and Dragons for an audience. Phil is no stranger to larger than life heroes, making him a perfect choice. 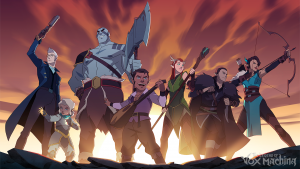 The animated series began life as a joke on the regular D&D live-stream (available on YouTube and Twitch). The cast wistfully joked that an animated series of their tabletop exploits would be nice; after all the regular Critical Role cast are best know for their voice work on a variety of popular animated shows.

What started out as a gag became a  Kickstarter for a 22-minute animated short. It did so well that this has become a 24-episode series, currently in production via the award winning studio Titmouse  and Amazon Prime.

The Legend of Vox Machina follows a group of neophyte adventurers on a quest to save the realm from terrifying monsters and dark magical forces. Throughout the first season, our characters will face undead giants, overthrow a sinister necromancer, and confront a powerful curse that has taken root inside their own group.