Netflix’s The Umbrella Academy will begin production on season 3 next month, with cast members including Elliot Page, Tom Hooper, Robert Sheehan, and Aidan Gallagher all returning. The last moments of season 2 saw the Hargreeves siblings returned to the present day after preventing (yet another) apocalypse in the 1960s. However, it soon becomes clear that their adventures in the past – creating a sex cult, participating in the civil rights movement, and attempting to prevent the assassination of John F. Kennedy, to name but a few – have once again disrupted their timeline.

And so, the Hargreeves siblings return to their present only to find that the Umbrella Academy never was. In its stead, they discover the Sparrow Academy, complete with its own set of gifted students; the only familiar face is their formerly dead sibling Ben’s (Justin H. Min), now sporting a facial scar, scene kid hair, and a mean attitude. Since the second season’s release in July of last year, fans have been left to speculate about the identities of the Sparrow Academy members.

But rejoice, for Netflix has now announced that the Sparrows have officially been cast! Joining Min and the original cast in The Umbrella Academy season 3 will be Justin Cornwell, Britne Oldford, Jake Epstein, Genesis Rodriguez, Cazzie David, as well as… a cube called Christopher. Here’s everything we know: 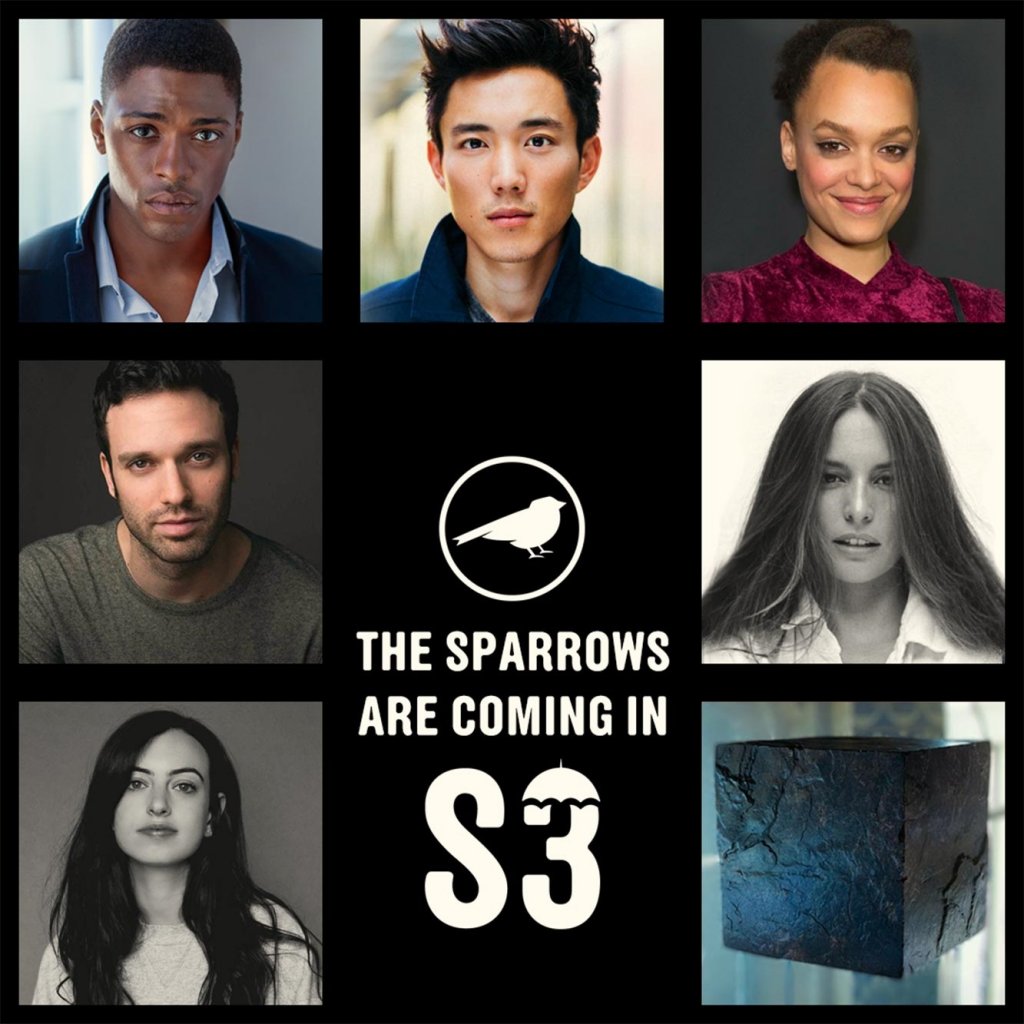 Justin Cornwell will play Marcus, a.k.a. Sparrow #1. A “charming, chiselled, colossus… as smart as he is strong. Marcus is disciplined, rational and in control.”

Britne Oldford, who you may recognise from The Flash, will play Fei a.k.a. Sparrow #3, “the smartest person in the room and willing to work things out”, despite also coming across “as a misanthrope”.

Jake Epstein is Alphonso, a.k.a. Sparrow #4. The announcement teases that “years of crime fighting have left his face and body with countless visual reminders of his battles. To compensate, Alphonso is armed with a caustic and biting sense of humour.”

Genesis Rodriguez is Sparrow #5, named Sloane, “a dreamer who feels a higher cosmic calling leaving her eager to see the world and experience a life beyond her upbringing.”

Cazzie David will play Jayme, Sparrow #6, “a loner hidden under a hoodie” with a “fear-inducing snarl”.

And lastly, season 3 will introduce newcomer Existential Dread Inducing Psykronium Cube as Sparrow #7, a.k.a. Christopher, a.k.a. that floating Tesseract-looking cube glimpsed briefly in the previous season finale. A “telekinetic cube of unknown origin” which serves as the Academy’s oracle, “can turn the room freezing cold and induce paralysing fear”, and “who hands out incredible advice and serves as the family mediator”.

No word yet on when to expect The Umbrella Academy season 3, so stay tuned.