The Force Awakens did a lot of clever and original things with the Star Wars franchise. It also knew when to press the nostalgia button and avoided fixing anything that wasn’t broken. A good example is the First Order’s TIE fighters.  With the exception of a shiny new paint job, the new movies kept the eye-catching swarm of angry H-shaped starfighters, much to the delight of Star Wars fans everywhere. For players of the Star Wars X-Wing game, this means you can have TIEs in your First Order force.

As any Star Wars fact fan will tell you, TIE’s come in lots of different variants, and this is especially true when it comes to the First Order.  The TIE/sf Fighter Expansion Pack is the model and rules for the First Order’s Special Forces fighter. This is the two-seater with the shields and the turret that looks a lot like a regular TIE to the casual viewer. Also known as the TIE with headlights, it’s the one that Finn and Poe steal in The Force Awakens. The one they crash into Jakku.

Rules-wise, it’s quite powerful for a TIE. With good shields and decent hull and a turret option, this is a fine addition to any swarm. Pilot cards include ‘Quickdraw’, who lets you take another shot if you lose a shield. Very useful against enemy swarms. The pilot ‘Backdraft’ allows you to get the most out of that turret. In play this basically means you’re flying around in an ever decreasing circle trying to maintain lock on one choice target till it explodes.  Thanks to its adequate defences, this really works. It’s a very nippy ship, with a great dial that gives it some of the more generous moves. (That said though, this is a ship that you can’t take too many risky moves with otherwise the turret becomes a moot point.)

The rest of the cards in the set enhance the ship’s function as a mobile support platform. There’s nothing new and it’s all focused on getting the ship into a position to do maximum damage.  You can see how Finn and Poe were able to escape, given how impressive this ship is. A must-have addition to a First Order collection. 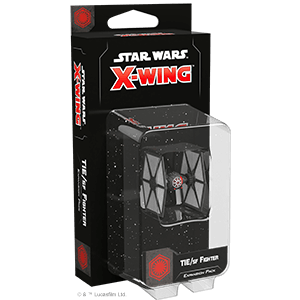 EBERRON RISING FROM THE LAST WAR

EBERRON RISING FROM THE LAST WAR / AUTHOR: WIZARDS OF THE COAST / ...