Dune: an impossible feat, a poisoned chalice, a sprawling pillar of science fiction. A lot has been written on the complexities of adapting a book like Frank Herbert’s Dune, with its mythology so steeped in detail and history that even legendary filmmakers like Alejandro Jodorowsky and David Lynch have tried and failed to bring their visions to life (the latter has gone as far as to disown his 1984 take).

Co-writer and director Denis Villeneuve – who back in 2016, made Arrival, one of the most intelligent, intimate, yet grand films in the science fiction canon – here takes a different approach: to split Herbert’s hefty tome in half. Dune is, by its title card’s own admission, merely Part I of a hopeful two-parter. It’s a risky play, considering a Part II has yet to be greenlit by Warner Bros.; whether the Canadian filmmaker’s gamble pays off will depend wholly on Dune’s box office success. 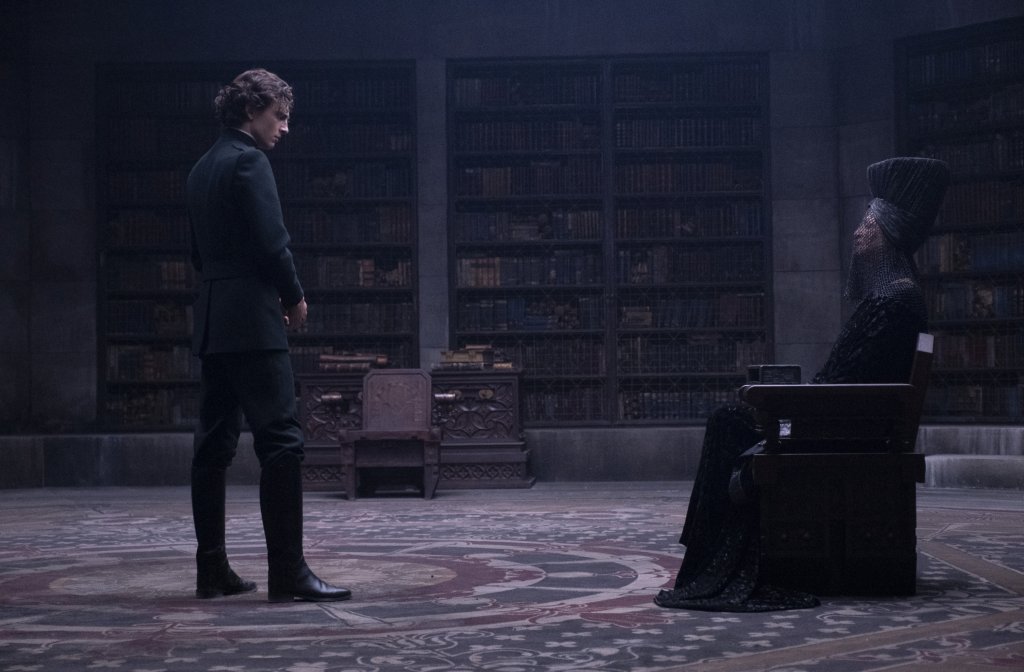 However, with an unfathomable budget at his disposal, and two and a half hours dedicated solely to the book’s first half, Villeneuve is able to take the scenic route to establishing Herbert’s vision. Amidst a galactic empire fraught with political machinations, secret orders and warring factions, Dune concerns itself most with House Atreides, one of the many dynastic powers under the Imperium. The head of the House, Duke Leto Atreides (an ever-fantastic Oscar Isaac, whose repeated yelling of “desert power!” is as entertaining as it is bizarre) is tasked by the unseen Emperor to take over rule of Arrakis, a desert planet rich in the galaxy’s most valuable substance: Spice.

A coveted commodity that extends life and fuels interstellar travel, spice (or melange) shares its home with colossal, territorial sandworms, and native peoples called the Fremen. Prior to Atreides’ appointment, the Arrakis mining operation had been overseen by their rival – House Harkonnen, led by Baron Harkonnen (Stellan Skarsgard, ghoulish and near unrecognisable) – for over 80 years. Duke Leto senses that his unexplained promotion is a trap but, powerless to refuse the Emperor’s call, emigrates his family and their military forces to the sandy world.

Paul Atreides (Timothée Chalamet, whose fine-boned silhouette cuts a lonely shape amid Dune’s vast landscapes) is the film’s archetypal hero and heir to House Atreides, a “chosen one” figure with strange abilities he struggles to control. Unsure of his place in the world, from the beginning Paul is plagued by strange visions of a blue-eyed Fremen girl (Zendaya, given little to do in a role that's clearly earmarked for future development). They foreshadow death and ruin, but also hope – and though he may understand them fully, he knows enough to keep details hidden even from those closest to him.

His mother and Leto’s concubine, Lady Jessica (Rebecca Ferguson), is also a member of the Bene Gesserit, a secretive and ancient order of women who use genetic experimentation, political scheming, and religious engineering to further their own agenda. Jessica believes her son to be their long-prophesised saviour and result of a centuries-long eugenics program: the Kwisatz Haderach. It’s in how Dune paints Paul as a messianic figure that issues begin to arise.

“The outsiders ravage our lands in front of our eyes. Their cruelty to my people is all I’ve known,” Chani states plainly in her introductory voiceover. “Who will our next oppressors be?” she then questions. These opening words promise a critique of Western colonialism, how it built its own wealth from looting indigenous resources, and its history of oppression – or at the very least, they indicate some subversion of the white saviour narrative that is otherwise set up by Dune’s choice of protagonist. Yet Villeneuve’s Dune fails to provide any kind of follow-through. The initial premise – that Paul is a messiah fated to free the Bedouin-coded (despite what Javier Bardem's casting would suggest) Arrakis natives – goes totally unchallenged. With a Part II, the whole may yet prove itself to be more than the sum of its parts; but alone, Dune Part I feels bitterly conservative.

Away from its problems with storytelling, where Dune thrives is in its beauty and scale. The production design does as much heavy lifting as the dialogue in its creation of signposts, by which viewers can more comfortably navigate Dune’s expanse. Each faction and setting has its own visual identity, from the oil-spill darkness of Giedi Prime and the cool palette of Caladan, to Arrakis’ rich colouring and glittering heat. Meanwhile, the film’s vastness is emphasised by Greig Fraser’s wide and largely static cinematography, which revels in the oppressive majesty of Dune’s many worlds. Together with Hans Zimmer’s dread-filled score, full of guttural howls, wailing choirs, bagpipes, and reverberating percussion, Dune is crushing. It may seem redundant to labour the film’s enormous scale – it is, after all, a Villeneuve film – but in the case of Dune, its size and beauty truly cannot be overstated.

With all this emphasis on largeness and atmosphere however, the story and its characters are all-too-often flattened by Dune’s icy heft. Emotional resonance and narrative substance are forgone in favour of grim artistic grandeur. With all the legwork Villeneuve performs to set up a future series, Dune comes out rather top-heavy: though an immensely successful exercise in world-building, the filmmaker’s favouring of spectacle leaves room for little else. By the time Dune puts in place its disparate threads and an image begins to emerge, the credits are rolling.

Though Villeneuve’s is unquestionably the most successful adaptation the world has yet seen, once the awe for its artistic merit begins to dim, Dune is left feeling like the overture (albeit, one of astonishing splendour) to a grander opera. Now, whether Dune will go down as a science-fiction great or whether it will be remembered as a film that pushed the limits of visual artistry, depends entirely on whether a Part II ever gets made.

If you’re after an original and disturbing horror movie, The Innocents is a ...

EVERYTHING EVERYWHERE ALL AT ONCE

Between multiple Spider-Men, an Illuminati of Marvel deep cuts, and ...