Wizards of the Coast have announced that the next book for Dungeons and Dragons Fifth Edition will be called The Wild Beyond the Witchlight and it will be available from September 21st 2021. It is primarily intended to be an adventure for Dungeon Masters to run for their players, but will contain plenty of setting information.

The book will showcase the wicked whimsy of the Feywild to fifth edition for the first time. Much like the other D&D books, two covers will be available; one will have the standard D&D Fifth Edition logo and a cover designed by Tyler Jacobson. The other will be more abstract and feature a Displacer Beast; the artist for the alternate art cover is the sublime Hydro74. 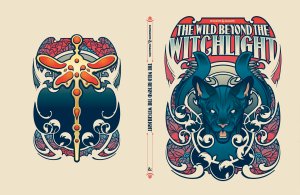 The Feywilde are part of D&D’s default setting, The Forgotten Realms. As the name implies, they are faerie like beings who lurk in a demi-plane just a cat’s whisker away from normal reality.  The new book is likely to be similar in format to previous D&D  adventure books such as Icewind Dale Rime of The Frost Maiden.  Though it’s primary focus will be to present a flexible adventure that will take months to run and be different every time it’s played, it will also contain useful setting information for Dungeon Masters and players alike.

We understand that the senior story designer on the book is Chris Perkins, who has produced some of the most impressive RPG books to come out of Wizards of the Coast in recent years.