Eurotrash is back and we’ve got a bumper 20-disc box set of the show to giveaway thanks to Network. Just read on, watch the trailer, and enter below… 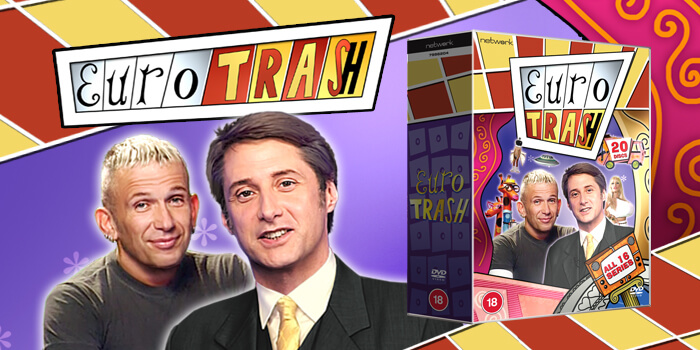 Let two delightful, devil-may-care Frenchmen take you firmly by the hand and lead you into a surreal world of weird wonders, celebrity interviews, sexy supermodels – and more smut than you can shake a stick at! Hosted by everyone's favourite Gallic charmers, Antoine de Caunes and Jean-Paul Gaultier and narrated by Maria McErlane, Eurotrash reigned supreme for over a decade and still sends a shiver down the spines of prudes and people of a nervous disposition to this day!

A TV phenomenon for over a decade with its uncompromising cultural commentary and quirky magazine format, Eurotrash was the enfant terrible of ‘90s telly that pulled in millions of viewers each week, and will be remembered with fondness and horror by young and old alike.

Eurotrash is on DVD and digital from September 26th