Renowned Irish animation studio Cartoon Saloon is back with Wolfwalkers, the third and final film in their informal ‘Irish folklore trilogy’. With their latest set to release theatrically in late October and premiere on Apple TV+ in December, Wolfwalkers has already become one of the top critically-acclaimed releases of 2020 and established itself as a strong contender come awards season. STARBURST spoke with directors Tomm Moore (also co-founder of Cartoon Saloon) and Ross Stewart about Wolfwalkers’ themes of environmentalism, colonialism and humans’ relationship to nature, as well as their artistic choices and inspirations. 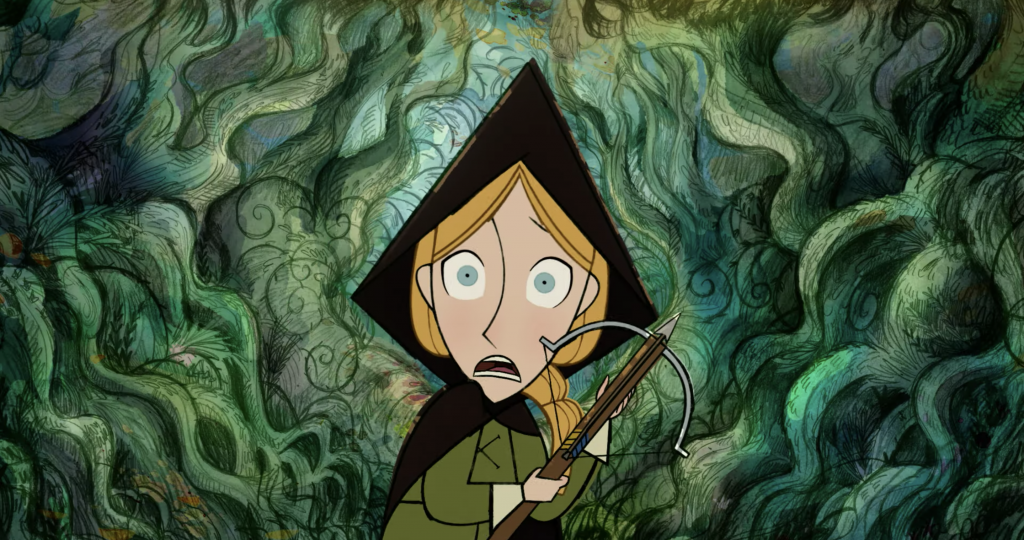 STARBURST: What inspired the story for Wolfwalkers, and what sort of research did you get into?

Tomm Moore: We were talking about species extinction, and the worldviews that the world was getting locked into, more and more. We kind of thought about Irish history during that period when the wolves were being made extinct – even though Ireland had once been called Wolf Land – and how significant that was for the culture, what was lost beyond just the wolves. And we see that happening all over the world today. So that was the inspiration, and so was this kind of Irish version of the werewolf mythology from where we grew up, here in Kilkenny. That was the folkloric and historic inspiration, but it was more the fact that it spoke to stuff that is so relevant today which drew us to it. And of course, we wanted to tell a story that spoke to modern children and modern audiences. So the focus always has to be the emotional journey of the characters; that’s the universal thing. The research that we did was all like a shopping trip to find the parts of history and folklore that would help boost that central story, that heart of the movie, which is the two girls.

Ross Stewart: And the research also involved understanding what life was like at the time. The attitude that the Irish people had towards wolves was really interesting in that they didn’t see this species as an enemy or as a species to be wiped out. That was a newer way of thinking brought by the English. The Irish were able to live in harmony or in some kind of symbiotic relationship with this megafauna.

Could you elaborate on how this period of history and the story you tell in Wolfwalkers are relevant today?

TM: I think it's sadly so relevant. And this idea that there's something instinctual about a society that fearfully gathers around this strongman type of ruler, which kids need to be able to see past if we’re going to survive into the next generation. You know these strongmen, tribal rulers who just tell everybody what to do to be safe – we have to go beyond that and face whatever fear it is that's holding us back from seeing things from the point of view of the other. What is it that’s making us shelter behind tribal walls? Kids need to be able to think beyond that, because it's really sad to see the world collapsing back into this sort of strongman authoritarianism that existed back in the 1600s. 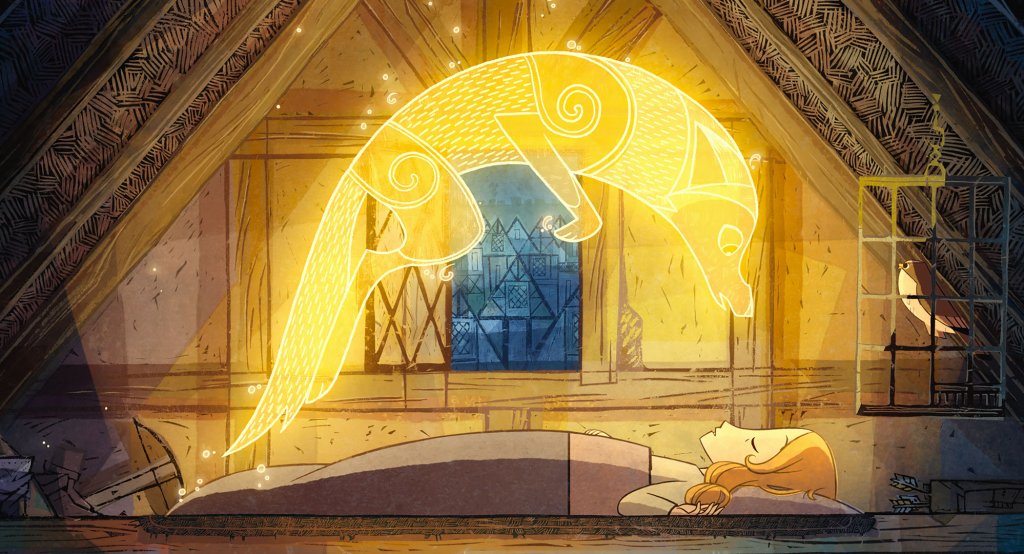 RS: And also, what's really bizarre is that at a time when the entire planet is under threat, our collective home, we still have factions of humans fighting against each other instead of all working together to try and save our world. Hopefully people get some sense of that from our film.

TM: You just have to be a small part of chipping away at that block. I think storytellers can’t expect to convert anybody, but they can work to influence their audience so that they start to slowly see things from another point of view. Then at some point, there will hopefully be some breakthrough in consciousness for the next generation. We all need that.

RS: Become a ripple in the sea that eventually becomes a wave. You know?

And another way you seem to put that across is in the animation and stylistic differences between the town and the forest, or the townspeople and the animals. Can you speak a little more on those decisions?

RS: Well, from the initial concept of the story that Tomm and myself had, we had two contrasting worlds: the townspeople’s where, especially following the puritanical invasion, everything was ordered and ruled over. It became like a cage for the people, and especially for Robyn. Then in contrast to that you have the forest where the wolves live, and the way they and the wolfwalkers interact with their world is based on instinct. There's a freedom there and a kind of a chaos. The visual styles of both worlds have to reinforce what they’re about. That way, everything in the town is about horizontals and verticals, with very angular and quite aggressive mark-making and very oppressive areas of black. By contrast, the forest is based on curves, you know, domineering areas of black. The forest, by contrast, is based on curves, it’s very free and loose, and the compositions lead off the screen. Everything is very impressionistically painted, very free and wild. The styles very much serve the idea that there are two contrasting worlds within the story. 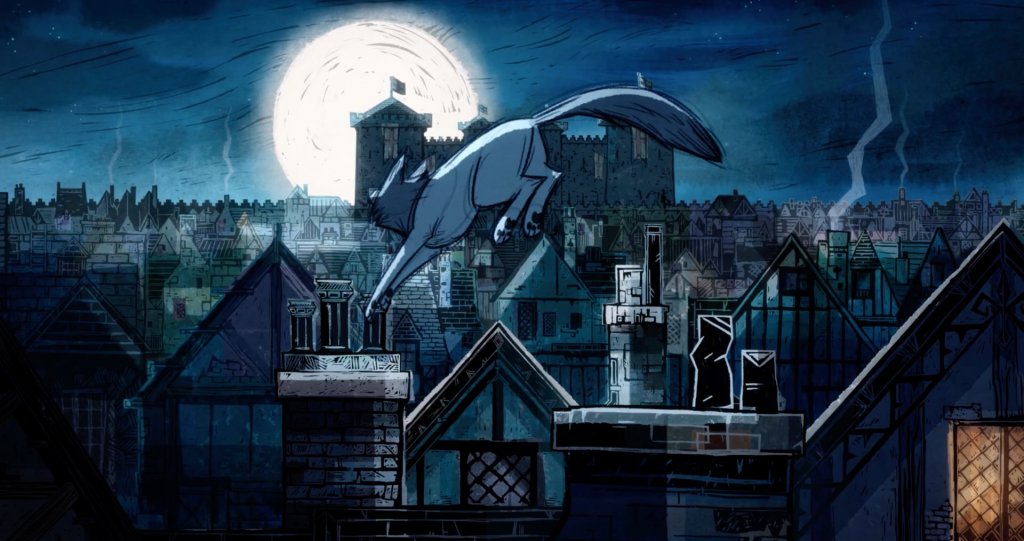 And you kept some of the sketch lines in the design, which is really interesting.

TM: Yeah, and it’s something which I think hand-drawn animation has lost, that sense that there’s an artist behind there. We have to keep that human element to it.

RS: And traditionally, clean-up departments would have been in charge of getting rid of the rough underdrawings and putting this perfectly clean line over it. We thought, let’s try and keep some of that rough underdrawing, because they’re beautiful. They’re part of the whole exploration of the characters.

The fact that those underdrawings appear much more in the wolf and forest scenes also emphasises that naturalism.

RS: Yes, totally. And it suggests this inner energy and inner life in them as well.

Another very interesting aspect, visually, happens when we see the world through wolfwalkers’ eyes. What influences or imagery did you draw upon to design those sequences?

TM: There was some research there into the way canines see the world with less colour but with much more powerful scent and hearing – we tried to represent that. And the wolf-vision was probably the most technically challenging. We worked with a small team that was led by Evan McNamara, who is a director and animator from Dublin that we worked with. We kind of combined a CG way of flying through the forest, and then everything after that was done hand drawn on paper. I think it gives a really unique look; it was a lot of work for just three minutes of movie, but it makes you feel like you’re completely immersed in the drawing. That wildness that we wanted to show is all around you, and we wanted to make it feel as exciting for the audience as it would be for Robyn to suddenly see the world through new eyes.

And lastly, what projects are you working on that we might look forward to?

TM: We’re deep in production on a new feature film. Nora Twomey, one of the partners in Cartoon Saloon, she directed The Breadwinner – she’s making a movie called My Father’s Dragon for Netflix. And that’s epic on a bigger scale than we’ve ever done before. I think it’s going to knock people out when it comes out. I’ve just finished a short film for Greenpeace about the destruction of the Amazon, so you’ll see that soon in late October, early November. Those are two immediate things, but we’ve got so much in the works in terms of series, and then another movie based on Puffin Rock. There’s a lot coming, so watch out for that.