Every year has its most anticipated action films and 2018 is no exception. Reboots of Tomb Raider and Robin Hood come out in the spring along with Steven Spielberg's take on the novel Ready Player One. Those will be followed by two instalments in the Marvel Cinematic Universe - Avengers: Infinity War and Ant-Man and the Wasp; another Star Wars offering - Star Wars: Han Solo; and two X-Men chapters with X-Men: The New Mutants and Deadpool 2.

One other big franchise sequel to keep an eye out for is Jurassic World: Fallen Kingdom, which continues from 2015's Jurassic World. The aforementioned Spielberg was the first to bring Michael Crichton's novel to the big screen in 1993. This was followed by The Lost World: Jurassic Park in and the third of the trilogy, Jurassic Park III (1997).

As with any successful movie franchise, we saw crossovers into video games that evolved from the simple first editions of the '90s to the more current releases, which include a Lego-themed game for kids and brand new game to be released in companionship with the film next year. Also, and not surprisingly, dinosaurs and the Jurassic World brand have been tied into the online casino experience, with a Jurassic World slot title available that features much of the iconography and music from its big-screen counterpart.

As for the movie, Chris Pratt will continue his streak as one of the hottest action heroes in Hollywood right now by reprising his role as velociraptor-whisperer Owen Grady, while Bryce Dallas Howard also returns as Claire Dearing, manager of the Jurassic World resort. One of the most talked about casting moves is the callback of Jeff Goldblum, as mathematician and chaos theorist Ian Malcolm, who starred in the first two chapters. Goldblum is one of Hollywood's most recognisable actors, whose career really got going in the 1980s with films like The Big Chill, Silverado and The Fly. Some other notable, and somewhat more recent appearances were in Independence Day and its sequel Independence Day: Resurgence.

Goldblum also joined a talented ensemble cast - as most Paul Thomas Anderson films employ - in The Life Aquatic with Steve Zissou. He also starred in the acclaimed indy flick Igby Goes Down and had a major role in the successful Law & Order: Criminal Intent television series. Goldblum, you might remember, was recently seen in Pratt’s other franchise sequel, Guardians of the Galaxy Vol 2 as the Grandmaster which he also played in one of this summer's blockbusters, Thor: Ragnarok. 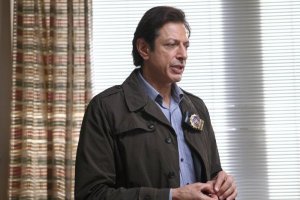 Goldblum's return to the Jurassic Park/World franchise appears to be another example of increasingly common phenomena of bridging reboots of franchises with their originals. Whether it be for backstory or continuity or simply to market the newer release to older fans, it seems to be a common move for filmmakers when available. The original Star Trek cast joined Star Trek: Generations movie; Harrison Ford, Carrie Fisher and Mark Hamill have been in some of the newest releases in the Star Wars universe; the X-Men prequels have often crossed-over with cast members from the original films, and Matt Damon and Carl Reiner will appear in Ocean's Eight next year.

From comments made by director J.A. Bayona and producer Frank Marshall, the storyline appears to revolve around a volcanic eruption on Isla Nublar, still home to Jurassic World, prompting the staff to attempt to relocate the dinosaurs off the island. Obviously, there is an ethical dilemma surrounding the risk/reward of such an endeavour and, should it succeed, the story has numerous potential directions to follow with the implications of dinosaurs on the mainland. One can be sure that the character of Ian Malcolm will be central in those discussions and, as an added bonus, he has experience in corralling dinosaurs rampaging in urban centres.