Ahead of the release of the I Spit on Your Grave 6-disc box set, which includes the original film, the reboot trilogy, the official sequel, Déjà Vu, as well as a new documentary, Growing Up With I Spit on Your Grave, we caught up with Jamie Bernadette, who stars the sequel.

STARBURST: Were you aware of the first film before you got the part?

Jamie Bernadette: Yes, I was. I had watched it maybe a year before I saw the casting notice for the sequel, so I was definitely aware of it. And when I saw the sequel, I was like, ‘Oh my gosh, I would love to do that’. I couldn't believe they were making a sequel, I thought the 1978 original was phenomenal, very real and raw, it just feels like it's really happening. It's not glamorised at all. If people didn't know better, I would think it was like a reality video. That's how real it feels.

Were you aware of the controversy about the film?

Yes, I know the video was banned, I don't think just in the UK, I think quite a few places if not everywhere at first. I think we've come a long way with women nowadays compared to the ‘70s, for sure. So I think seeing a powerful woman on screen wasn't taken well. So it seems like that's the part that some people were offended by, which is interesting. And nowadays that's the part people love.

So what was your first reaction when you got the part in the sequel?

Oh, gosh, I cried. I'll never forget it. I was going back and forth with Terry [Zarchi], the producer, for a few months - it was quite a long audition process. I had sent in a tape and then I had a first audition in person with the director Meir and Terry and then I had the five-hour third audition where I read with a bunch of other actors, and I wasn't told I got the part until a couple months after that. It was shock, relief, and joy and a lot of emotion for sure - but I was thrilled.

What was the life like on the set? We spoke to Terry Zarchi [Meir’s son] and he said it was quite a long shoot.

Yeah, I think it was about a 30 to 31-day shoot, but it was fantastic. I had a great, great time. Everybody was awesome. I think we became like a family and the week of the rape was trying on people. Some even more so than myself. I know I had a couple people come in to me on set saying they had been raped or they know someone who had been raped and crying. So that was hard for some of the people on set, more so than myself. That week was tough emotionally for people. I think a lot of us know someone who's been raped, unfortunately. But besides that, it was a great, great shoot.

What was what was Meir like as a director?

He was great, you know he's a lot of fun and very encouraging. He knows what he wants. He definitely had a vision for this film for I think a long, long time. He definitely knew what he wanted, but he's the kindest, sweetest soul. He’s now like my family, I've been over there for thanksgiving and we've become very close. Terry and I can get on the phone and talk for an hour easily, so yeah, they're wonderful, wonderful people and they are very respectful and kind. 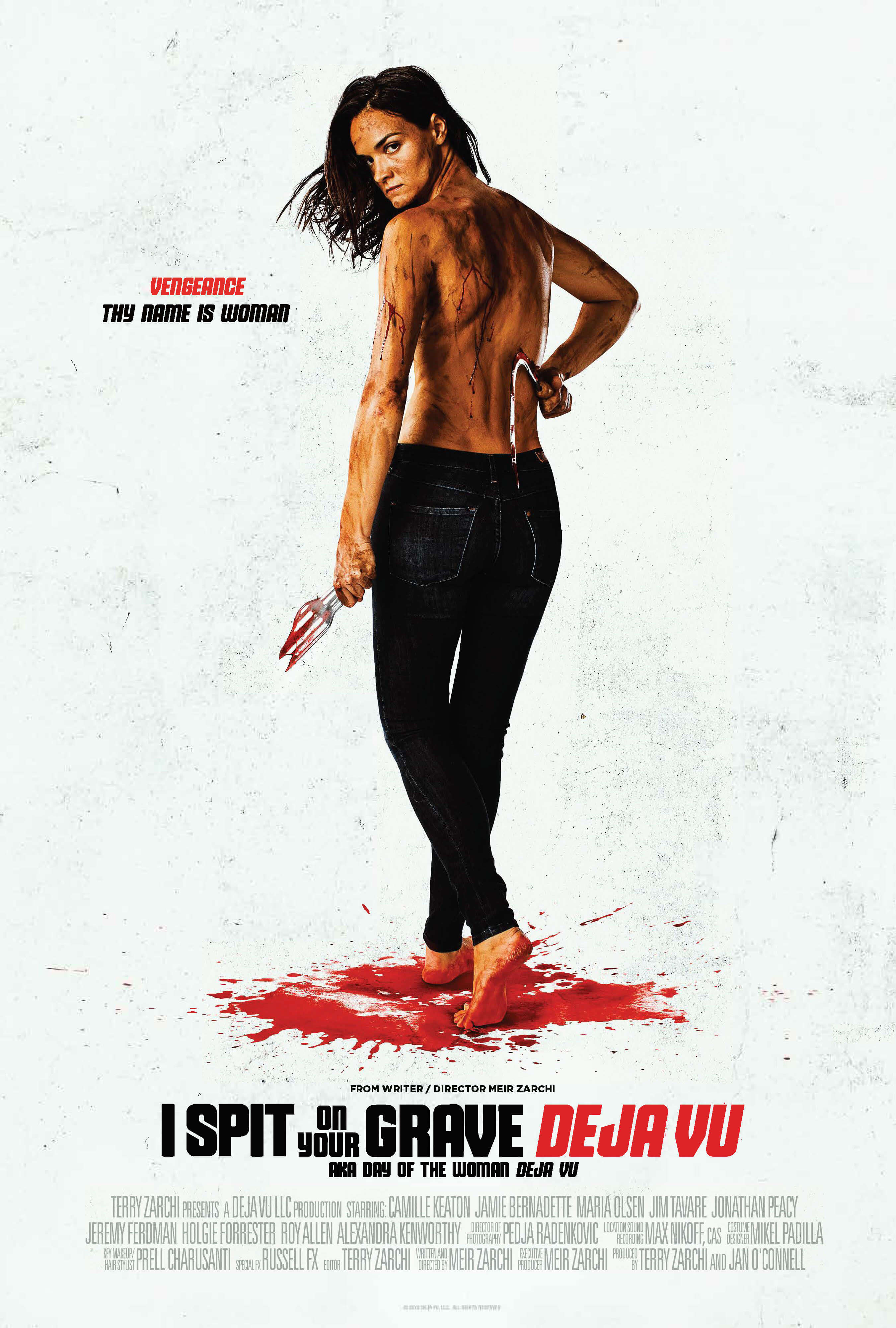 What was it like working with Camille? Did she give you any tips?

Yeah she did. She is great; you know when you just connect with someone right away? That's what it was like for us the first day on set together. It was just like we had known each other forever. I consider her one of my best friends. We just talked on the phone the other day for what might have been like an hour and a half. She really is like a mom to me. But yeah, she talked about her experiences on the first film and she had a rough time as well during the rapes and the thing is when you do physical scenes with men, not just on Déjà Vu, but I've noticed in other films is that men are so strong are so physically strong. And sometimes they don't realise like the strength that they're imposing on you and they don't even mean to hurt you or so she went through some of that like she was accidentally kicked and that stuff happens that's part of it. That's acting for you. You have to kind of expect that you might get hurt when you're doing very physical scenes like that. I've been hurt quite a bit not just in this film.

The sequel twists things a little because there's a female antagonist as well as the male antagonists; what was that like for you?

Oh, Maria and I get along great. We had worked together before but not in this capacity. We really got to know each other on this set. I liked bringing the female antagonist in, it was something different to the original and the 2010 the remake and the other two films that followed. I think Meir’s like that, he very much thinks outside of the box and does what he wants, and doesn't worry about what people think. And I think that's very important as an artist, just like the length of the film, it was like a lot of people was like, ‘This is too long’. But you know, he wanted the cut that he wanted, so it's essentially a director's cut. And he did what he wanted just like the first film.

What was your favourite kill in the film?

This is probably a spoiler, but when I come out of the grave and I attack the old lady with the shovel - that was just the best!

You get to do a variation of one of the kills in the first film, with the bottle. That must have been very satisfying…

Oh yeah, the bottle. Jonathan [Pearcy] was great, he had great reactions. That was a very exciting day. They didn't show all of it in the film, but the running around and his screaming was fantastic.

There is a religious slant to this film, with the family trying to use an ‘eye for an eye’ to justify their actions. But there’s a message in the film that you shouldn’t bother because it's never going to end.

Yeah, absolutely. I think it's interesting to have that theme in the film, when people use their religion to justify their behaviour. I think Meir in his writing is really making a statement there. And I think there can be some truth to that, throughout our history and nowadays people like to use a religion to justify a horrendous act like that. I think religion is a beautiful thing, and faith in God, and I'm all about all religions. I think it enriches people's lives and brings a society together in a way but it can be used in a very negative and twisted way. I don't I don't think violence is ever the answer.

The film's getting its first release in the UK in this part of the box set, with all the films included. It's interesting that Déjà Vu has passed through the BBFC uncut while the first film still missing a little bit of the footage. It’s like they still feel afraid of that first film.

Yeah right. I think with Déjà Vu, I had expected there to be more raping and stuff because of the first. I thought that Meir went easy on me to be honest! You know it's bad, rape is always awful, but it wasn't as horrible as the first film.

What's next for you horror wise?

Well, I'm in the middle of a 1800s horror thriller Western called Homestead, we've shot part of it. We were shooting it in Northern California in March and then we were shut down from the Coronavirus. So we were all flown home and we're starting that back up. It looks like October but with the virus, it's like we never know, so I can't wait to finish that. It's a phenomenal script. The filmmakers are fantastic. I have some other films hopefully releasing soon, I have a post-apocalyptic horror film called State of Desolation. I'm the lead in that and I produced it. And then I have some others, Ash and Bone and Nicole, Her Ex, and the Killer - another horror.