In 2016, a short film entitled POLTERHEIST caught our attention when it played at the STARBURST International Film Festival. We were delighted to when we heard that the team behind it were expanding it to feature length. Now that the film is available on DVD and VOD, we spook - sorry, spoke with the director David Gilbank to discuss making the gangster horror comedy…

STARBURST: Why did you decide to expand the original short to feature length?

David Gilbank: From the very start, the reason we made the short film version of Polterheist was to make a ‘shop window’ for our writing and filmmaking. Even though we didn’t have a feature-length screenplay of Polterheist, we always considered there was a 90-minute version lurking in the background somewhere that we would have to write one day. The short film was to be something we could shop around as a taster for someone to make it into a feature film. Of course, no-one is ever going to do that, or it’s a very rare occurrence, as we learned. There’s no avoiding hard work. Yet the short film won a bucket load of awards all over the world and attracted some favourable reviews. So we wrote an original screenplay that was OK.

Then we asked a Leeds-based theatre playwright called Gemma Head to add some magic to it. She gave the film some real humour and heart that is testament to her talent. So we had a screenplay, but nothing happened. I started to get frustrated that the film wasn’t getting made so I approached a few people asking for money, including a guy that broke my ribs in an international Rugby League match a few months previously. There was another guy who I played rugby with who gave us some money. I guess you could say I forced the agenda and just started filming with about 20K in the bank. I just started to make it without a plan. I just did it.

Then I asked a great producer called Pepe Fowler to come on board and help me get things organised and she did a fantastic job. So we started filming bits here and there over the course of a year, as and when the actors were available. We managed to get hold of a top-notch cast who really added some quality to the film. The acting and screenplay are really impressive. 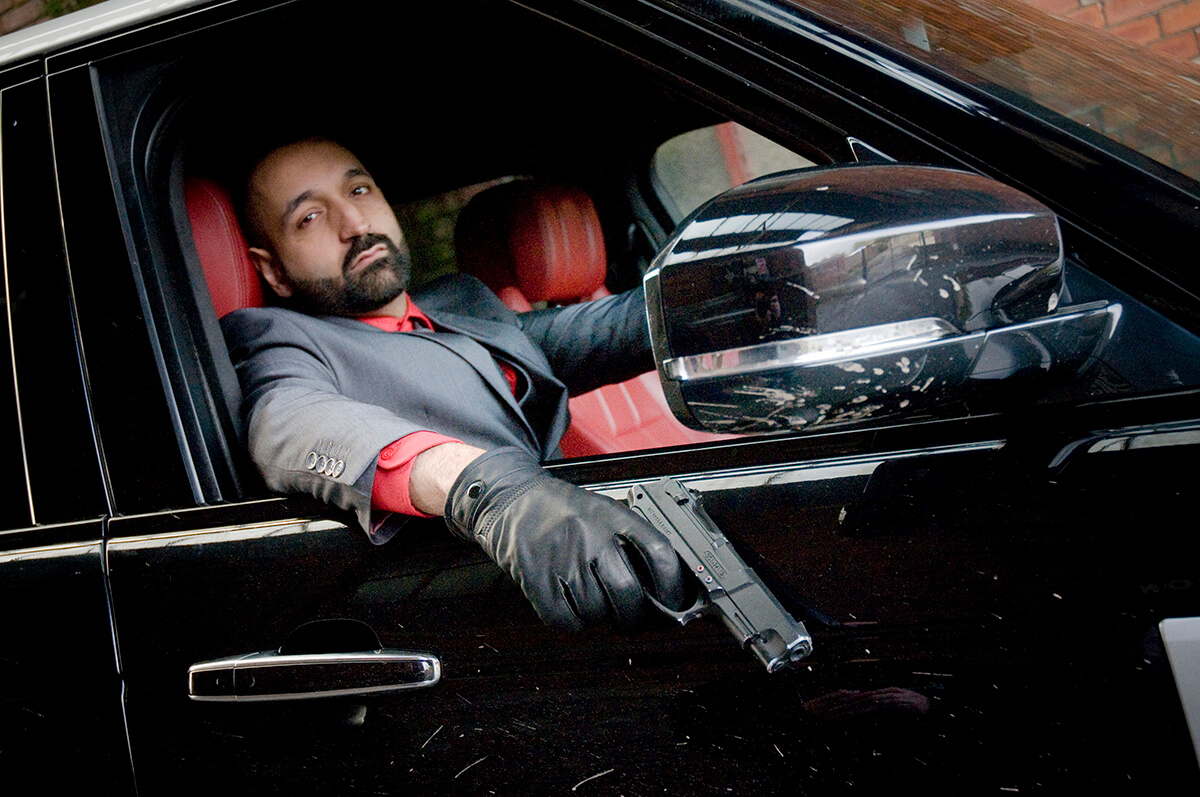 What was the biggest challenge on the film?

Every first-time filmmaker with a small budget gets the same two pieces of advice: keep your costs low by a) setting your film in one location and b) have three characters only.

My response: fuck off. I’ve never taken advice that everyone follows. I love Apocalypse Now and Colonel Kurtz is an inspiration. My motto is ‘do what is necessary to achieve victory’. Fuck that one location rule. Fuck that three actor rule. So I gathered a team around me that fought tooth and nail to make it happen. We did. Everyone around me believed in what we were doing and we all marched together.

My ambition was to make a good film, and to that ends, Polterheist is set in over 20 different locations and uses a cast of hundreds. We used our money wisely with a few extravagances like set builds and car rental. We paid our actors and crew.

It’s a low-budget film, and that is a big challenge in itself. We auditioned all the key roles and when I saw the actor I wanted we did everything we could to get them in the film. Pushpinder Chani did a sensational audition for the psychotic crime lord Uday, and I knew he was the guy I wanted to be in the film. But Pushpinder is very much in demand as a stage and TV actor so we had to synch up his rare free days with those of the other cast members. Likewise, Jo Mousley (Alice the psychic) and Polly Lister (The cop). Both our main protagonists Siddique Akbar Ali and Jim Cymbal are also bust people. Getting them all together in the same room was a challenge.

Was there anything that you wanted to do but couldn’t, either for budget or other reasons?

We wanted to have a massive shoot-out between the Pakistani gang and the Polish gang towards the end of the film. I wanted to make it like Heat and Zulu but set in Bradford. The cost for it would’ve been extravagant. Paul Renhard loves guns and action films and he wrote a doozy… the audience would have felt the bullets ripping into skin. But, alas, it never happened. I imagined that the Polish gang were all ex-military so would have had that methodical approach but the Pakistanis were more feral and inventive. But in the end, we did perfectly well without it, but that scene would’ve been sensational.

The film looks as though it cost more than the low budget you had - how did you manage that?

Our cinematographers, Charlie Leek and Chris Powell are very, very talented and they shot it beautifully. But importantly, we worked with a post-production house in Brighouse, West Yorkshire called One Bright Dot. The guy there, Chris Brearley, has an amazing eye and gave the film a seriously good look, scene by scene. Chris went through the film and was meticulous. He’s an amazing talent, as was Nick Nestle, who did all the Foley and sound effects work. We were also very lucky to get Umberto Gaudino to do the film music. I discovered Umberto at the Leeds Conservatoire of Music. I approached one of the tutors and asked if there was any talented movie musicians there and he immediately told me about Umberto. I met with Umberto and agreed to work together. He went back to Italy soon after and completed the music from his bedroom in Turin. He’s one to watch. The music in the film, like all the other elements enables it to punch well above its weight.

POLTERHEIST is available on DVD, VOD, Digital Download and Prime Video. Read out review here. It will screen at the STARBURST International Film Festival with the director in attendance.