John Wyndham is easily one of the most important science-fiction writers of the 20th Century. The influence of his work can be seen in modern media to this day; from the survival horror of The Day of the Triffids to the mutants in The Midwich Cuckoos and the post-apocalyptic social commentary of the Chrysalids, the English author’s writing is considered essential reading for anyone interested in the genre. He is founder of the ‘cosy catastrophe’ genre, weird tales set in a sleepy, passive England that only exists in fiction.

It should come to no one’s surprise that his three most known works have been given their own Folio Society edition, all the better to sit on your bookshelf alongside classics such as Dune and The Foundation Trilogy.  As one might expect, the Folio Society versions are incredible well produced, extremely durable and are just the right sort of weight for reading.  The slid into a fairly evocative slip-case, inspired heavily by the Chrysalids.

The Day of the Triffids book has a green motif and seven illustrations by Patrick Leger. The artwork is highly evocative of the bleakness of this frequently mis-interpreted work. Wyndham’s tale of man’s greed and ecological tragedy is as powerful today as it was back in the 1950s.  It’s the most ‘action adventure’ of Wyndham’s work and Leger nails the mood perfectly. Adam Robert’s introduces the book in his own unique style in an essay at the start of the book. 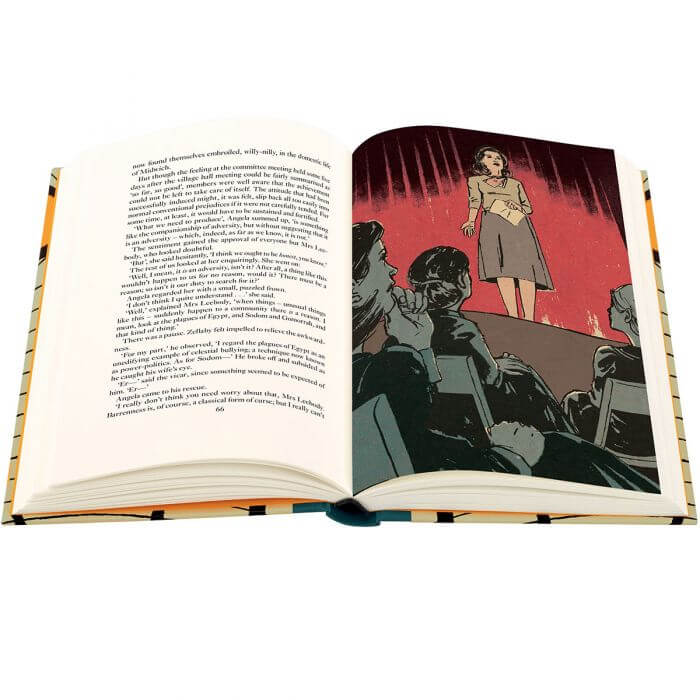 The Midwich Cuckoos is given an orange motif and again, the influence of this book can not be under-stated. It is the creepy tale of an alien invasion of sorts; following a strange, gas-like phenomena in the village of Midwich that knocks everyone in the area unconscious, every woman of child-bearing age becomes pregnant. The resulting off-spring are creepy,  golden-eyed , silver-skinned blonde humanoids with telepathic powers. It has inspired a long-list of horror stories and super-human fables, and is a cracking read. Adam Robert’s nails much of the books appeal in his introduction and Leger’s art is gorgeous throughout.

The final book in the collection is the less well known but just as crucial The Chrysalids. It is a tale of mutants surviving a nuclear apocalypse.  Even the slightest variation in form invites sterilisation or death from the community; those with mutant powers are labelled blasphemies. It is partially a coming of age story (if it came out today some would label it Young Adult), and focuses on the survival of David , a young telepath who forms a conspiracy with other telepaths. The book itself has a purple motif and again, the Adam Roberts introduction and Patrick Leger's illustrations complement the book perfectly.

The Wyndham Collection – Folio Society brings together three essential genre novels in the finest way. Well worth making space in your collection for.

When we first saw the fully-grown Anakin Skywalker and his mentor Obi-Wan ...

There is something that is incredibly satisfying about a Folio Society ...