Known for her work on Star Wars: Phasma and Star Wars: The Perfect Weapon, writer Delilah S. Dawson has returned to this iconic world once more. Set after the tragic events of The Last Jedi, Resistance spy Vi has been tasked with a crucial mission by General Leia to see if she can establish a new base at the Galaxy's Edge on the planet Batuu, away from the unforgiving First Order. Sounds easy right?

En route to the heart of the planet, The Black Spire, it's time for Vi to meet the team that General Leia has assigned to her. We discover the beautiful fusion of sarcastic droid Pook (K-2SO fans look here) and the intense back story between Vi and her once enemy now turned good guy Archex. The book lifts off the ground in a fine fashion, and you already want to see how it plays out. The Black Spire is a place that doesn't want to adapt to off-world life, and it's happy to sit outside of the seemingly never-ending quarrel between the First Order and the Resistance. This is something that makes the overall journey extremely gripping, as Vi has to passionately earn the trust of every single character she meets, and prove that even if Batuu hasn't thought about it yet, joining the Resistance and helping them build this new outpost is the only way forward. Delilah's powerful writing makes it easy for the reader to be swept away by Vi's belief system in only a few introductory chapters.

While trying to bring a new spark of hope to The Resistance, Vi has to deal with an old 'friend' of Archex's from the First Order named Wulfgar Kath, an unstoppable personality that will do absolutely anything within his power to succeed, even if that is with sheer, in-your-face terror and raw might. Another standout has to, of course, be the true ruler of the Black Spire, Oga, who with her gangster-type mannerisms may seem like she doesn't care on the surface but will ultimately do anything she can to protect her way of life. These two provide a vital balance in a blunt and fierce way.

Delightfully filled with Star Wars culture and detail, Delilah has done a beautiful job at bringing Disney's Galaxy's Edge themepark to life in canonical prose. For fans of the franchise, you'll be happy to find nods to Podracing, Exogorths, and much more, the theme-park Easter eggs are tasteful, and we implore you to discover them. It is clear to see that the research done for bringing this book to life has been well respected, and not overly-abused to end up taking away from a refreshing and adrenaline-fueled narrative which The Black Spire has at its core. The icing on the cake is the way that Delilah has seemed to have gone out of her way to give us origin structure to each individual we encounter as much as possible (even if they aren't at the forefront, there was something you had to know about them). By having this depth, the pay off is highly rewarding.

So, whether you are looking for something to get you ready for Star Wars: Rise of The Skywalker, or you're fortunate enough to be planning a trip out to Disney's Galaxy's Edge itself (the descriptive nature of Oga's Cantina in this book alone will have you praying to your local travel agent), then this is an absolute must-read for you. So "May the spires keep you", and enjoy this impressive addition to the galaxy far, far away.... 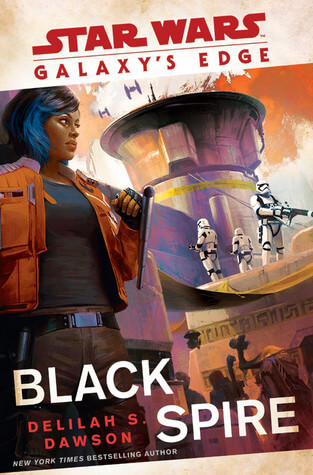 WAR AND PEAS – FUNNY COMICS FOR...