We suppose that, after 800-odd episodes, it had to happen eventually. To date, Star Trek episode titles have for the most part English, with the odd smattering of Latin (because it’s for clever people, obviously, not that it’s pretentious). And now we have wej Duj – the first title in a made-up language (and yes we know, to paraphrase Thor, all languages are made up). Specifically, it’s Klingon for “three ships,” which makes sense both because the bumpy-headed tosspots are a big part of the episode, and because it primarily concerns the lower decks crews of three ships (and, to a lesser extent two more, but since our Klingon is limited to about six words, we’re not going to attempt to be a smart arse and amend the title to “Five Ships”).

Structurally different to most episodes, wej Duj splits its action pretty much evenly between three different ships – the U.S.S. Cerritos, a Klingon bird of prey, and a Vulcan science ship.

Onboard the Cerritos, the crew has some rare R&R time, courtesy of a long warp flight. A distraught Boimler discovers that each of his friends – rather than hanging out with him – is spending it with a member of the bridge crew. Despite being the most ambitious member of the foursome, the insecure Boimler is the only one who isn’t friendly with a member of the senior staff – something he worries may hold him back career-wise and sends him into one of his usual panics.

Cue scenes of the hapless ensign trying to crash Tendi’s holodeck rock climbing session with doctor T’Ana (in one of the few onscreen references ever to The Final Frontier); join Rutherford and Shaxs’ pottery-making, only to immediately upset the security chief; and visit Mariner and Captain Freeman, only to get freaked out to discover they’re discussing “women’s problems” and leave as quickly as possible (bad news ladies, 24th-century medicine still hasn’t found a cure for period cramps or hot flushes).

Fortunately for Boimler, he teams up with Commander Ransom and his fellow Hawaiians, courtesy of telling a tiny lie and pretending he’s also from the islands. This blags him an invite to their Hawaiian-themed party on the holodeck, and more importantly for Boimler, a chance to suck up to the first officer. But will Boimler’s ambition outweigh his need to be all honest and Starfleet-y?

The second of the three ships, is a Klingon bird-of-prey, the IKS Che'ta'. Their lower decks crew is very similar to that of the Cerritos, although with being Klingons, a tad more violent. There’s a Mariner-style crewmember complaining about their assignment (although, considering she’s tasked with cleaning out the Gagh worms, you can hardly blame her) and Ma’ah, their Boimler equivalent, eager to impress the captain and progress. The main difference here is the Klingons’ different method of advancement makes it easier. Their first officer has been questioning the captain’s decisions, and being Klingons, this means a fight to the death between the two is imminent.

Ma’ah – who is assigned to the bridge intends to impress the victor of this challenge, and earn himself a promotion to first officer. Well, as a plan for advancement, it’s probably better than unconvincingly pretending to be from Hawaii.

The third of our trio ships is the Vulcan science vessel, the Sh’vhal, where the lower decks are every bit as thrilling as you’d imagine: all discussions of lutes and chess. A junior officer, T’Lyn has been conducting unauthorised enhancements to the sensors (sorry, they’re Vulcans, that should be pronounced sense-ors) and detected unusual readings from a nearby system. She proposes to the captain they investigate. Amongst Vulcans, this practically amounts to mutiny. 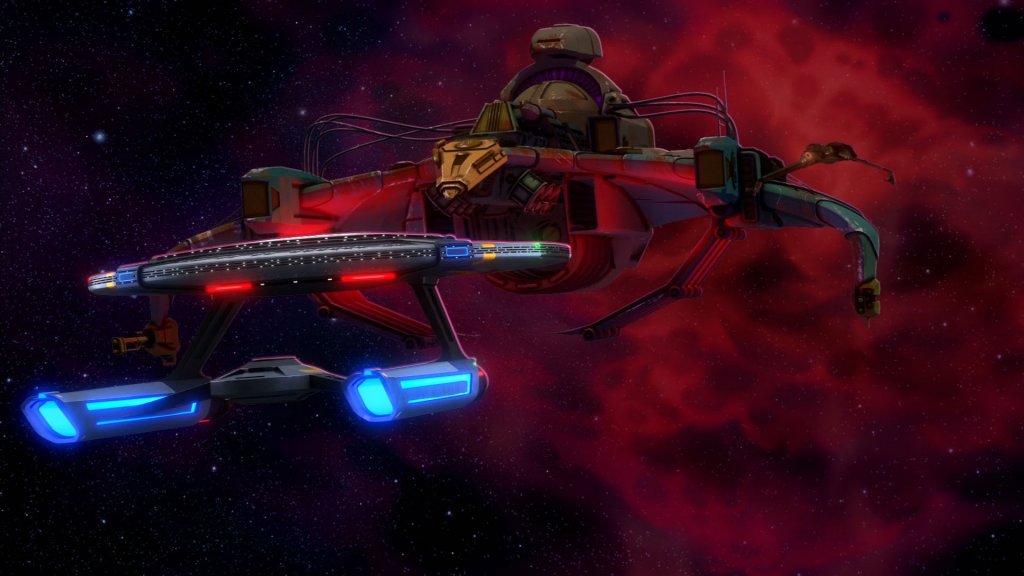 Talking of mutiny, onboard the Klingon vessel, Ma’ah’s plan seems to be working. The captain has been challenged by his rebellious first officer, but defeats him and says his replacement shall be whoever impresses him the most; something Ma’ah leaps to, even offering to look after the captain’s pet Targ (which apparently does an “honourable (bowel) movement”). Unlike Boimler, this sucking up works, and Ma’ah earns himself a promotion – just as they arrive at a Pakled ship…

We’ve been wondering all season who was behind the Pakled threat – a race whose natural ambitions pretty much amount to collecting shiny things – and now we have their answer. It’s the ship’s captain, Dorg – a rogue Klingon who despises the current peace and is using the Pakleds to destabilise the region. He’s the one who gave them a bomb to attack Earth. Being idiots however, they used on an asteroid – the source of the readings the Vulcans detected – to see if it worked.

The Cerritos soon arrives, having also picked up the anomalous readings. Freeman, thinking the Pakleds are threatening the Klingons, leaps to their defence. A battle ensues, with the Klingons siding with the Pakleds against the Federation ship.

Unfortunately for Boimler, this puts an end to his holodeck sucking up to Ransom, where – typically scared – he admits he’s not actually from Hawaii, leading the rest of the group, Ransom included, admit that they’re not either. Turns out they’d all been doing it to suck up to senior officers, and – Boimler excepted – they’re all from assorted moons, and bond over that instead (Boimler unsuccessfully claims that his hometown, Modesto, California is like San Francisco’s moon, which gets him nowhere as it’s a frankly rubbish piece of reasoning).

As things look bad for the Cerritos, two things happen. Well three things if you count a brief cutaway to the lower decks of the Pakled Clumpship (yes, they call them “Clumpships”, and, in true Pakled fashion it’s named “Pakled,”) where crewmembers have intellectual conversations like “I am hungry,” “you should eat,” “you are smart.” Firstly, the Vulcans turn up, and, using enhanced shields courtesy of another T’Lyn’s unauthorised projects (she’s a major rebel that one), help turn the tide of the battle. And secondly, Ma’ah, disgusted by his captain’s dishonourable use of the Pakleds, challenges Dorg to single combat, killing him, and withdraws the Klingons from the fight.

For her ingenuity and passion, T’Lyn’s captain decides on an assignment for her more suited to her rebellious ways – serving on a Starfleet ship. Don’t be remotely surprised if she makes a (welcome) appearance on the Cerritos in the near future. And while a disheartened Boimler – exiled from the moon buddies club – laments his lack of a bridge buddy, Ransom sends an enthusiastic cadet his way, after some organisational tips from, as Ransom put it “the most organized person on the ship.” He may not be in Ransom’s friendship group, but in recent episodes, he’s more than earned the senior officers' respect, which is what he really craves.

This season of Lower Decks has focussed on two areas – the emotional growth of the main characters, and the Pakled threat. We got some progress on the latter – learning who was using them, and – with them being given a second bomb (or “boomer” as they call it. Is that a Phantom Menace nod?) – establishing that the threat to Earth is still very real. We didn’t get much in the way of character growth though. Boimler is still slowly learning that the way to progress is through his competence, not his sycophancy; Mariner and Freeman are gradually learning to live with each other’s presence on the ship, and Rutherford and Tendi are still frequently unfairly consigned to the background (if there’s one way in which this season disappoints, it’s in how little the pair have been used). None of this really progressed during the episode, but when everything else going on is so much fun, it’s hard to argue. You can’t have everything.

wej Duj is another fun episode of Lower Decks. It may lack the emotional resonance (and indeed the laughs) of some episodes, but it makes some interesting progress in the ongoing Pakled story arc, as well as experimenting with – for Trek – an unusual story structure. Oh, that fifth ship we were talking about – the episode experiments further, giving us the franchise’s first-ever scene over the end credits. It takes us to the lower decks of a Borg cube where, in typical Borg fashion, they’re all regenerating and not doing much else. Boring twats.