The first half of Lower Decks’ second season has focussed very much on resolving the fallout of the show’s central relationships following the events of last year. Mariner and Boimler have repaired their relationship following his leaving both the Cerritos and her for a short-lived posting to Riker’s U.S.S. Titan, while Tendi and Rutherford have rebuilt their friendship following his memory wipe. Other secondary plots, like the fallout from the revelation that Mariner is Captain Freeman’s daughter, and the death/resurrection of security chief Shaxs have also been successfully resolved.

There is, however, one major thread that has been left dangling – that of the increased threat from the Pakleds, and what they’re up to. Bar a solitary appearance at the start of the season, they’ve been absent so far.

The Spy Humongous – freed from the other ongoing storylines – finally catches up with Starfleet’s least-cunning adversaries, as well as giving the command crew a proper story. The Cerritos has – unusually – been chosen to negotiate a ceasefire with the Pakleds and arrives at their planet which, with the race’s usual flair for poetic language, they’ve named "Pakled Planet." There, Captain Freeman, accompanied by Shaxs, beam down, where a succession of Pakleds not only insist they haven’t got the authority to negotiate a ceasefire (apparently their helmets aren’t big enough), but they also insist on repeatedly addressing her as “Captain Janeway.”

They’ve also got an “escaped” prisoner to deal with - Rumdar - who’s managed to make his way to the Cerritos and, in his own Pakled way, requested asylum. Naturally this doesn’t sit too well with the Pakleds, who refuse to negotiate until he’s returned.

Meanwhile, our intrepid foursome have pulled anomaly consolidation duty – the worst assignment on the ship. Everyone’s dreading it, with the excitement of the ever-optimistic Tendi. Their job is to retrieve all the weird alien crap that the senior officers acquire on their missions, and have it safely sent to storage. For Tendi, this is the next best thing to going on actual missions. To the others, it’s collecting garbage.

Fortunately for Boimler, he’s spared it, falling in with a group known as the ‘Red Shirts’ (surely the most cursed name in Starfleet history) – a group of ensigns who work together to earn promotions. Alongside a couple of human ensigns, there’s the ever-annoying Jennifer the Andorian, and the Kzinti crewman who’s been lurking in the background all season (although this time he gets lines, marking the first time we’ve heard one speak since The Animated Series). Boimler’s caught their interest due his short stint on the Titan, and since they all seem to have a bit of Riker worship going on, they’re keen to learn how to ape his command style. You’d be forgiven that his friends would be annoyed at him abandoning them and avoiding an awful assignment, and a couple of episodes ago, Mariner probably would have. Now, secure in their friendship again, she simply admires his (non-existent) ingenuity for avoiding work.

Having the central foursome distracted with either collecting the officers’ rubbish or trying on padded uniforms means they’re oblivious to the Pakled situation. Not only does Freeman have to deal with a revolution on the planet, but Ransom and Kayshon figure out in about two seconds that their asylum seeker is actually a spy (and if Ransom can figure it out, it must be pretty damn obvious). Being a Pakled, he’s hardly James Bond-level, and after been shown top-secret areas of the ship like the gift shop and juice bar, he mistakes an airlock for a bathroom and manages to eject himself into space.

Mariner, Tendi, and Rutherford, however, are completely ignorant to all these spy shenanigans, as they’re too busy removing dangerous alien crap from throughout the ship. Tendi soon discovers her friends were right, and it’s the worst job onboard. After they’ve been inflated, slimed, had needles shot in their faces and – in Tendi’s case - been eaten and pooped out by a giant alien slug, she confesses that she actually volunteered them for the job in the first place as she thought it’d be fun. Up until now in the series, Tendi’s been unflappable, the unjaded optimist of the group. But everyone’s got their breaking point and being ejected out of a space slug’s rectum is Tendi’s. Which is understandable. 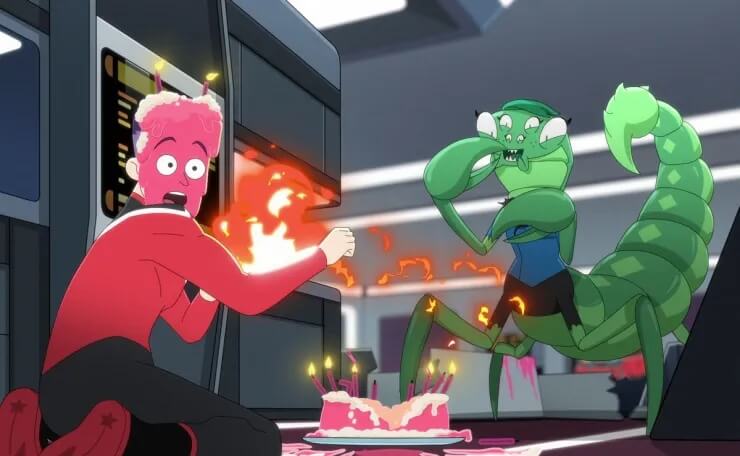 Unfortunately, she decides to have a rant about their group’s crappy jobs while holding one of the weird alien pieces of junk they’ve been collection, which turns her into a green alien space scorpion thing which proceeds to run riot throughout the ship, naturally.

No need to panic though because the Red Shirts are here to save the day. After a hard day of captain’s training – which in their world consists solely of making their uniforms look cool and practicing their motivational speeches (Boimler’s in particular, where he imagined himself on the bridge of the Enterprise-D was particularly mildly inspiring) - they spring into action. And proceed to all simultaneously give speeches to the crew. As this proves completely useless, Boimler saves the day by doing what comes naturally to him: being an accident-prone twat. His slapstick display – repeatedly ordering food from replicators and spilling it over himself (deliberate here, instead of accidentally like pretty much every other time he orders anything) simultaneously calms Tendi down and disgusts the Red Shirts with the indignity of it all.

The plus side of this is that the Red Shirts realise the futility of imitating their heroes instead of becoming one themselves and decide to disband, with the exception of their leader Casey, who earns himself a temporary shift commanding the ship from a disinterested Ransom.

Meanwhile, Rumdar is revived in sickbay, and returned to the planet, where the boastful Pakleds celebrate getting one over on “Captain Janeway” and congratulate their spy on not revealing their plan to set off a bomb on Earth during his mission – just after he’s tricked into revealing it to Freeman. Why the Pakleds want to attack Earth isn’t revealed, but it goes against what we know about them so far. They’re generally motivated by the acquisition of technology by any means necessary, to compensate for their natural slowness. It’s unlikely they’re acting out of malice, or for that matter, alone. Having gotten all the important character development out of the way in the season’s first half, the show looks set to ramp up the Pakled storyline from now on, revealing both what they’re up to and who’s pulling their strings.

Trek likes a good morality lesson, and the one here is about the importance of accepting people for who they are. Boimler’s always been looking to impress his superiors. Here he finally does it, not by imitating famous captains like the other Red Shirts, but by using his ingenuity and natural predilection for clumsiness. It’s a lesson that rubs off on most of his fellow Red Shirts. Mariner and Rutherford too learn that they shouldn’t try to dampen Tendi’s natural optimism by dragging her down to their level. She’d tried to organise a fun day for them, even if it did result in her turning into a giant scorpion. The group learn the importance of both self-acceptance and accepting others for who they are too. Unless they’re a Pakled. Those guys are dicks.

The Spy Humongous is another increasingly confident episode of Lower Decks, which continues to combine solid Trek storytelling, increasingly complex characters, and humour in impressive entertaining ways. It may not have Discovery’s grandeur, or Picard’s grandstanding performance from Patrick Stewart, but Lower Decks continues to be the most consistently entertaining incarnation of modern Trek. Plus this episode concludes with the gang prank-calling Armus - The Tasha Yar killing oil slick from Skin Of Evil - you don't get that in Discovery!

Oh, as for Casey’s shift in command – it lasts about five seconds before he’s relieved by Shaxs, who promptly dispatches him to clear up the “unspeakable mess” the Pakled left in the airlock. Serves him right.

MASTERS OF THE UNIVERSE: REVELATION (...