Chris Rock stars as Ezekiel “Zeke” Banks in Spiral: From The Book Of Saw, a brash detective alienated from his colleagues for turning in his partner twelve years prior. Now forced to work with rookie partner William Schenk (Max Minghella), Zeke takes charge of an investigation into a series of brutal murders eerily reminiscent of the city’s Jigsaw-coloured past. Soon enough, Zeke finds himself at the very centre of the mystery killer’s game.

The ninth instalment since the original Saw movie in 2004, Spiral is the first in the franchise not to feature Tobin Bell as John Kramer/Jigsaw, signposting a much-needed refresh for the beloved yet faltering horror series.

Instead, the iconic villain gets an update by way of ACAB. The copycat killer is targeting the city’s corrupt cops (of which there is no shortage), provoking a feverish and paranoid investigation into identifying who this killer – and their potential victims – might be. 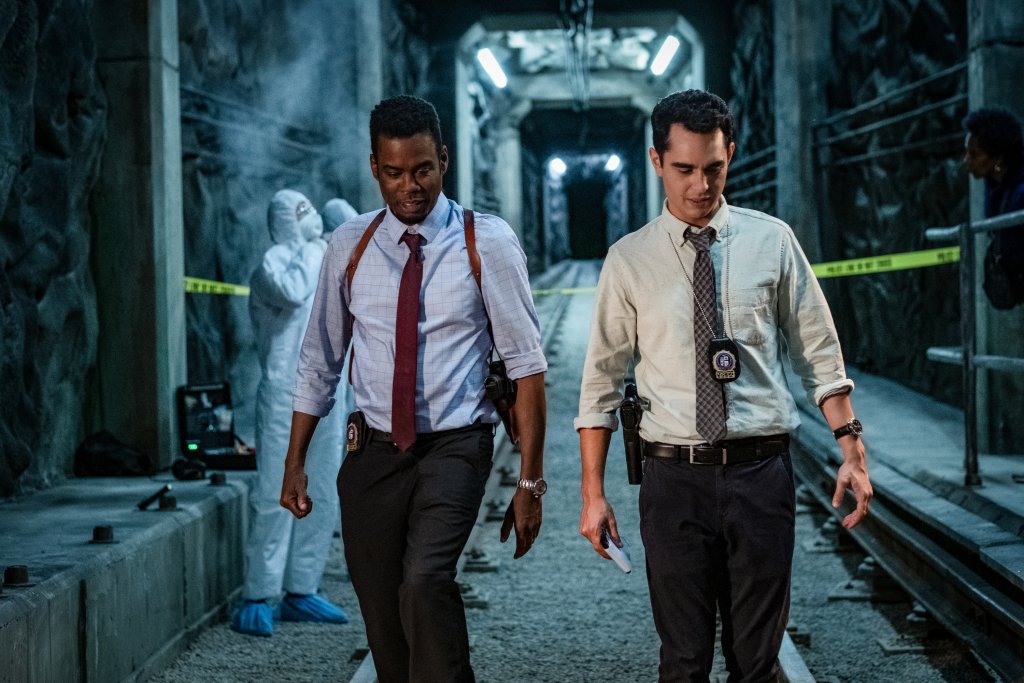 Spiral is a bold and confident companion piece from Saw veteran Darren Lynn Bousman, thanks in no small part to Chris Rock’s involvement. Who would have thought that the multi Emmy and Grammy award-winning comedian would be the magic ingredient to revitalise Hollywood’s most successful horror franchise? Rock lends Spiral a healthy and valuable dose of humour, throwing the scenario ever so slightly off-kilter so as to keep the audience guessing.

The supporting cast is equally good, even if Marisol Nichols is rather thinly sketched as Captain Angie Garza. Max Minghella in particular shines as the wide-eyed rookie who Zeke reluctantly takes under his wing, while Samuel L. Jackson lends his signature magnetism and energy to the role of Zeke’s father and veteran police captain, Marcus Banks.

Spiral cleverly repurposes Saw’s building blocks, honouring its legacy whilst moving it forward. After all, the spiral is a symbol of progress, is it not? The film certainly doesn’t skimp on the horrifying, sadistically memorable traps that gore hounds have come to expect, but the story is not defined by its horror centrepieces. The narrative that ties it all together is rich with thriller and mystery elements, as well as exhibiting a keen interest in deeper character studies. And while many will likely see the ending coming, nine films in, it is admittedly very difficult to both sneak one past the viewer and make the twist make sense.

All in all, Spiral is an unexpectedly daring entry which retools the best parts of the Saw franchise and reinvigorates the series in a style that is firmly its own. And friendly advice to other waning, long-running properties: just hire Chris Rock and let him wax lyrical about Forrest Gump. You're most welcome.

Spiral: From The Book Of Saw releases on May 14th in the US, and May 17th in UK cinemas.