Let’s be completely up-front about this; Folio Society Editions are something rather special. Beautifully bound books that come in hard slip covers designed to enshrine a particular work in the sort of thing that you pass on to your descendants.  In recent years they’ve been producing  definitive editions of iconic comic books in a similar way. Their take on Captain America, for example, was pretty much perfect.

Spider-Man – Folio Society Edition does the same thing, but for everyone’s favourite web-head.  Spider-Man is perhaps Marvel’s most well known but also  least understood hero. He’s an interesting mix of every-day, urban hero and at the same time, someone with spectacular abilities that make him truly amazing. Peter Parker’s entire thing is that you can be incredibly talented and still have it rough. This is a hero that constantly gets knocked to the ground and has a life beset with tragedy, and yet still gets up and keeps swinging from roof-top to roof-top.

The book opens with a short introduction from Roy Thomas, the second person to write a Spider-Man story. His insight into the character nails the tone throughout this book.

The collection comes with 12 classic Spider-Man stories as well as replica of The Amazing Spider-Man #1.  The latter comes in a nice blue envelope that slides into the slipcase. It’s looks and feels the part, though because the paper-quality is much better than the thing it mimics, no one is ever going to mistake it for the real thing. It’s a nice artefact to own and the main story features The Fantastic Four meeting Spidey. They’ve even left in the classic adverts, so if you ever wanted to read about body builder Mike Marvel’s secret new Dynaflex Method (yours for less than two dollars back in 1962), this is your chance. 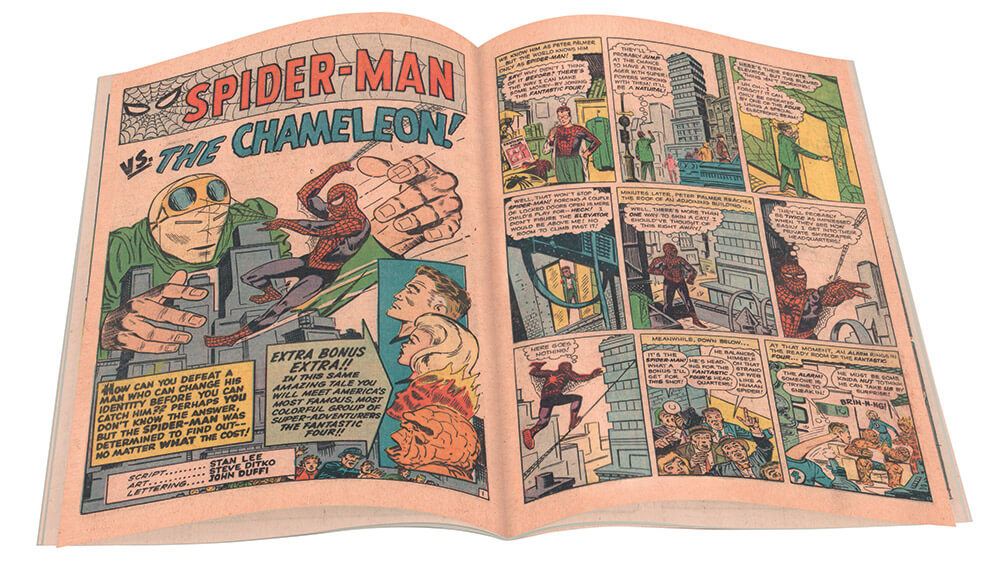 The twelve stories do their best to summarise Spider-Man as a classic hero. They don’t attempt to summarise every saga, or every new character the web-slinger introduced to the world. Instead we get various emotional beats through-out the comic’s run. At its heart, Spider-Man is a book about grounded in the reality of relationships. The selected stories (all of which are fan favourites) reflect this.

We of course get the origin story from 1962’s Amazing Fantasy, and then go on to meet  Doctor Octopus. We get Spider-Man Tackles the Torch!, a bit of fun that establishes Spider-Man’s friendship with Johnny Storm.  1966’s Birth of a Super-Hero reads like a run-of-the-mill 60’s era story, but it’s in there because it features one of the iconic moments that any Spidey-fan will instantly recognise.

Three of the stories here set-up, tell and then conclude Gwen Stacy’s original story arc, a tragic tale that would go on to define the hero forever.  We get fan favourite The Kid Who Collects Spider-Man!, which is also a tear-jerker.

Of course we get the story Venom, which skips past the entire Alien Costume saga and goes straight for the juicy bit.  The Conversation showcases Aunt May and yes, it’s another tear jerker. Spider-Men is the only story in the collection from the Ultimate time-line, but well worth for Miles Morales and finally we There For You, a powerful tale that smacks the reader in the face with the gravitas of the character.

The art, of course, is superb; this is Marvel’s flagship comic and some of the best artists who’ve ever worked in the field can be found in this volume.  The book itself is gorgeous; it’s a Folio Edition, we’d expect no less.

This is luxurious book to own and one we highly recommend to anyone who loves the hero. Well worth picking up.

The Folio Society edition of Spider-man, selected and introduced by Roy Thomas, is available exclusively from www.foliosociety.com, © Marvel 2021