Isaac Asimov’s Foundation Trilogy is one of the most influential series in science fiction.  This of course means that the ground-breaking series has gotten it’s own Folio Society edition, a luxury printing of the classic work that will last a lifetime.  Let’s take a look at the series itself, and then the utterly gorgeous Folio edition.

Though Asimov would go on to write other books set in and around The Foundation, the initial trilogy began has a series of short stories in Astounding Magazine way back in 1942.  It’s a tale that is vast in scope and scale but the central premise is quite simple. This also means the story is episodic in nature, making it quite a smooth read.

It is the far future, humanity has spread to the stars and the 12,000-year-old Galactic Empire is slowly collapsing, as all Empires do. Enter Hari Seldon, a genius who has used incredibly clever mathematics to predict the future to such a degree of precision that it can span centuries. Seldon’s plan is, broadly, to ensure that mankind does not descend into barbarism.  His machinations and plans lay the groundwork for many twists and turns throughout the series. 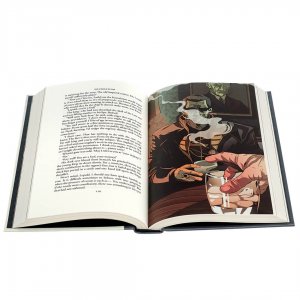 In the Folio Society version, this is underlined by its introduction; an essay by Nobel Prize-winning economist Paul Krugman. It’s a strong essay, one that firmly acknowledges science fiction’s crucial role in making us look forward. Krugman himself was heavily inspired by the trilogy, though he also acknowledges the books many flaws and makes the point that the world of Foundation is far from ideal in many ways.

The trilogy is an epic and exciting tale of galactic politics, intrigue, betrayal, and discovery. Though the first book Foundation is intrigue-heavy, its sequel, Foundation and Empire has a faster pace and the final novel, Second Foundation is again, a faster more exciting tale. This is not a series known for its epic space battles or laser-pistol slinging.  Instead, it’s a meditation on the nature of history and mankind’s ability to repeat its mistakes. No matter how strong or smart we may be, the weight of time will always threaten everything we build.  It is an incredible work.

The books are regarded as a classic for a reason and if you’ve read a lot of sci-fi you will see where much of modern science fiction’s ideas have come from, especially when it comes to space opera. It’s worth remembering that this book went on to inspire many others. Somehow it still feels fresh, though Asimov’s style is not for everyone.

The Folio Society Edition’s themselves are utterly lovely. We get three books that are encased in a single slipcase, which is robust and decorated with a picture of the world of Trantor in metallic colours.  Each book is three-quarter-bound in buckram with printed paper front boards with six colour plates per volume. Or to put it another way, each volume is a very well-made, exceptionally produced book that feels nice to hold simply as thing itself, regardless of the content.

Each book contains illustrations from Alex Wells, who creates visually striking images throughout the trilogy. Well’s combines that mix of 1950’s pulp with modern tastes to create something that looks like it’s won multiple Hugo Awards and adorns the bedrooms of thousands of science fiction fans. Each illustration encapsulates the scene is accompanies perfectly and adds to the already pleasurable experience.

It's lovely to see The Foundation Trilogy get produced in a format that will stand the test of time and given the themes of the series, the irony is not lost on us. This is a fantastic treat for any science fiction fan and given that the TV adaptation looks set to become the next big thing in sci-fi, it’s probably a good idea to grab a copy of this as soon as you can.  Recommended. 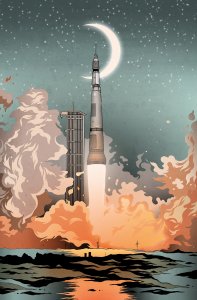 Illustration ©Alex Wells from The Folio Society edition of The Foundation Trilogy.