Rebellion’s commendable publishing policy of exhuming long-forgotten adventure strips from the 1970s heyday of British comics continues apace with this bizarre – and often quite bonkers – strip which ran in lurid black-and-white in the pages of Lion and Thunder between October 1971 and October 1972.

Typically for many of these archive strips – think Von Hoffman’s Invasion, for example – the villain is the lead character, constantly conjuring lunatic and outlandish schemes which they hope will give them power and dominion across the UK for reasons which are often strangely undefinable. Here, mad Egyptologist Dr Mesmer resurrects a 5,000-year-old Mummy named Angor in order to retrieve priceless artefacts stolen by burglars who have broken into his pyramid-shaped house somewhere in deepest London. Angor has extraordinary abilities – he can fire bolts of power from his hands, he can walk through walls – and other artefacts in Mesmer’s possession have the power to bring inanimate objects to life or even, in one hair-raising adventure, to facilitate time travel. The Mummy wanders around the city in search of the burglars and, fortunately, is observed by determined beat bobby PC Tom Stone who eventually persuades his pompous superior Inspector Moffat that something supernatural and eerie (clearly a popular word in writer Avenell’s vocabulary) is afoot. Mesmer’s determination to retrieve his artefacts becomes increasingly insane. He flies around the city in a magic chariot, he brings Egyptian statues to life, disrupts the making of a horror film at ‘Anvil Studios’ (geddit?) and, in one memorable sequence, creates an army of Mummies to invade a floodlit countryside pageant. Ultimately, the increasingly-desperate and demented Mesmer creates a lethal dust which freezes and ‘embalms’ those it touches and he sets in motion an audacious scheme, Angor at his side, to ‘embalm’ the Royal Family and the British Government during a procession through London.

Like many of these British strips of their era, Dr Mesmer’s Revenge is paralysingly repetitive. The story kicks off with the burglary, Mesmer animates Angor who wanders around terrorising and zapping people; Stone, Moffat and assorted Police and military types turn up, shout a lot, chase Mesmer and Angor away, and Mesmer sets off on some new, near-identical pointless scheme and the whole cycle starts up again. Avenell’s script rushes about a lot but the language is fairly simplistic, we learn little of Mesmer’s character and/or motivation, Stone and Moffat are bland stereotypoes and, of course, there are absolutely no female characters anywhere to be seen across a year’s worth of strips. ‘Of its time’ doesn’t begin to cover it. It’s also pretty bloodless stuff, for all its themes of terror, death and destruction. Cruz’s art is gorgeous though, wonderfully-detailed beyond the requirements of the stiff script, hugely atmospheric in monochrome, making wonderful use of shade and shadow and creating a real sense of creeping terror even amidst the madness of the storyline. Also included here are two longer-form stories, presumably from summer specials or annuals, one of which actually does give a little background to Mesmer’s origins and one which brings his story to a close when he realises he’s dealing with powers too great for him to control.

Dr Mesmer’s Revenge isn’t as relentlessly enjoyable as some of Rebellion’s earlier resurrections (and Mesmer himself came to life again last year alongside Von Hoffman in a new strip in The Vigilant, released last August, proving that you really can’t keep a good bad guy down), but it’s worth a look for the terrific art alone and there’s some fun to be had amongst the one-note story and absurd characters. 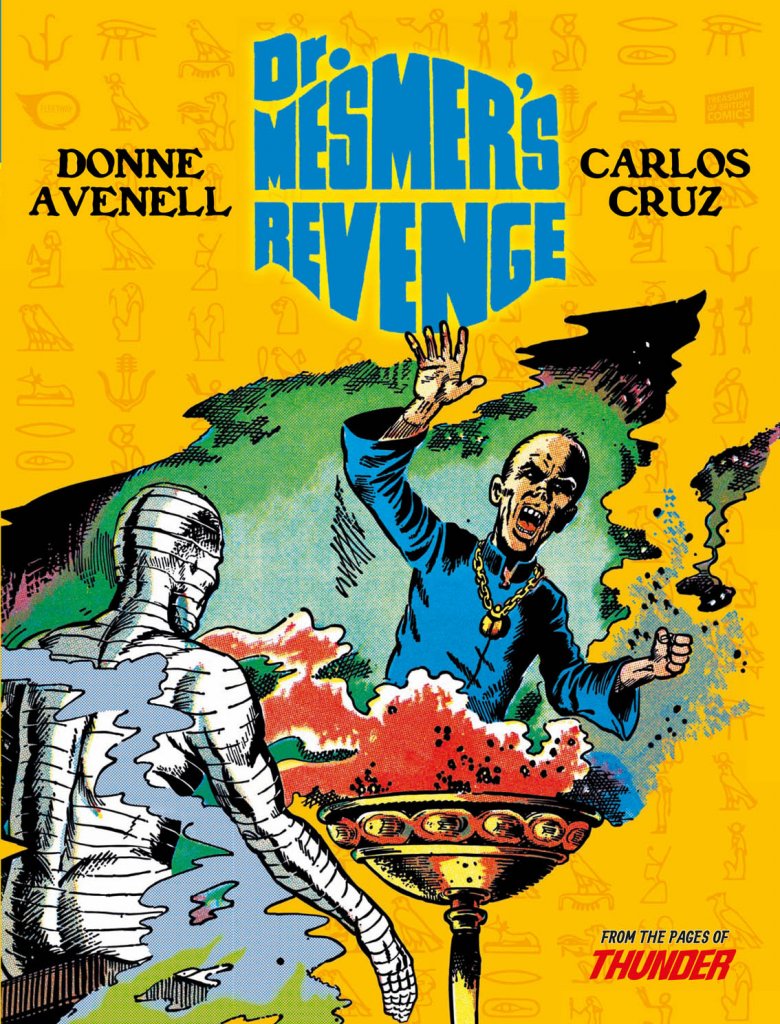 DC’s range of graphic novels for the Young Adult audience has been ...