Settlers of Catan is broadly considered to be one of those family board games that can be used to wean a family away from the likes of Monopoly and Ludo. The game is about settlers trying to establish a new colony on a distant island, and you trade resources  to build roads, fill granaries etc. It’s essentially a resource management game with some fun twists; it’s the game Monopoly  thinks it is, but actually fun.

Catan: Starfarers is the slightly more complicated, sci-fi sequel. The idea is that you’re expanding your colony into space, so you fly out, harvesting resources, dodging space pirates, making friends with aliens and trading resources with your fellow players. Each round your roll dice to see what resources are available; if you have a space port or colony on that resource, you get those assets and can use them to build more resources.

You’re building colony ships, space ports and trade ships. You can also upgrade your Mother Ship. This latter piece is a large, cool looking 1950’s style rocket ship (it looks a little Wallace and Gromit). You shake the ship every turn and check the coloured counters that slide to the bottom. This lets you figure out how quickly your other ships can move. A black piece means you draw an encounter card,  which can change your strategy depending on the card.  You can also upgrade the Mother Ship to improve the abilities of your fleet. These are represented by plastic bits you slide onto the model. It’s really nifty and the components are quite robust. 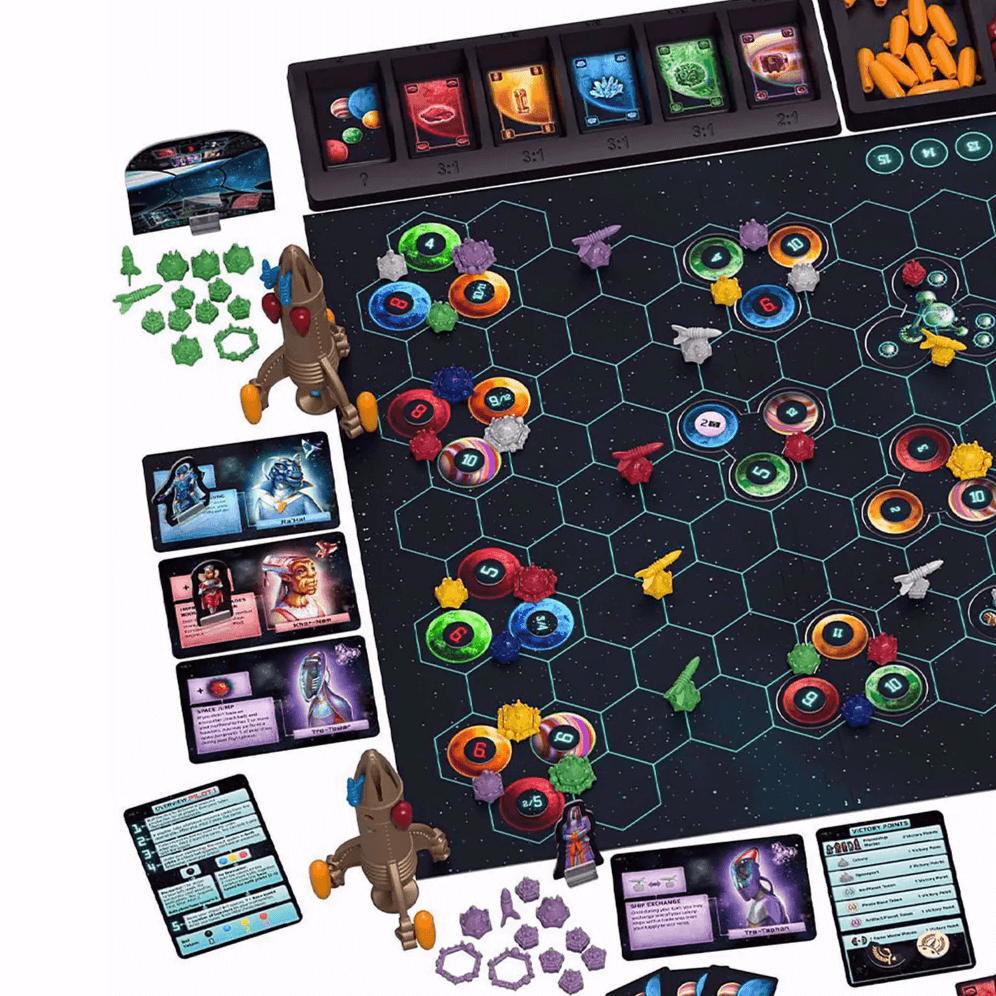 There’s more to it than that, but basically you’re flying around space, gathering resources, encountering aliens, trading with your friends and trying to generate enough cool things to earn victory points. First one to fifteen wins.

It’s an interesting blend of classic Catan, and though it’s a little more involved than the base game, once you played it for the first time you’ll pick it up.  Recommended for groups who like to think about the game there playing rather than just roll dice.

Catan: Starfarers first came out in 1999 under the name Starfarers of Catan, but swiftly went out of print. This is in part due to a lack quality components in the original box. This new edition (which is finally on shelves) has better pieces , cleaner rules and is overwhelmingly a better game. Starfarers was always a good game, hampered by fiddly elements, but now these have been resolved, we suspect the game will really lift-off.

Critical Role is a fantasy franchise founded on getting a bunch of talented ...