We absolutely adored the recent D&D adventure The Wild Beyond the Witchlight. Aimed firmly at people who like to play Dungeons and Dragons as an immersive experience, the book mixes modern gaming ideas with a nostalgia and a yearning to recover the little things that become lost to time.  The only thing that could have improved the book would have been more tools in which to run the game. Beadle & Grimms The Wild Beyond the Witchlight Platinum Edition does exactly that, and then some.

In case you missed it when the book came out, Witchlight is set in the Feywild, the ‘fairy land’ setting for Dungeons and Dragons. That’s under-selling it considerably though. Imagine someone mixed The Princess Bride, Labyrinth and The Dark Crystal  with Carnivale, Time Bandits  and Pan’s Labyrinth and you get rough idea about how weird and wonderful this campaign can be.  It’s a beautifully illustrated and well thought out book. It looks like so much fun that more than one Dungeon Master has approached it with a little bit of trepidation. After all, you want to run the game really well so you get the most out of it. And this is where the Platinum Edition comes in. 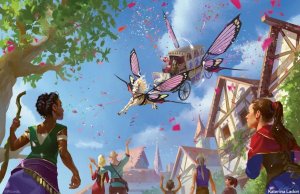 Beadle & Grimm specialise in taking existing gaming products and completely re-designing them physically  to add extra props, tools, maps and other useful gear.  You get a lot of stuff in the Platinum Edition this is as much a celebration of setting and its world as it is a games supplement.  This edition comes in a large box (packed by goblins, according to the label on the side) and get very big red box that closes magnetically filled with goodies. You also get items that don’t fit in the red box, but we’ll get to those in a moment. Almost all of these items connect to the story itself, so be aware that they are mild spoilers ahead.

Opening the reassuringly solid box, you’ll see some stunning art on the inside and carved carry foam. We get a pamphlet introducing you to the set and a unicorn horn. Yes, that’s correct, tucked safely into the foam is horn of legendary creature. It’s a solid (and thankfully not sharp) thing, that looks like it’s been hacked off a real beastie. The sculpt has a lot of detail, it’s a mix of cream and gold and it looks like it’s been around a long time. It’s entirely intended to be handed out at a key point in the campaign to one of the lucky characters and they’ve nailed the feel of the thing; this is what we mean when talk about using props to generate immersion. 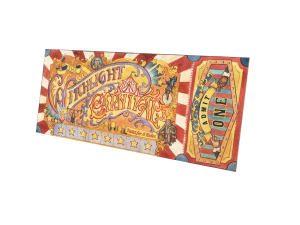 Digging in, there’s a folder containing various hand-out letters. These are produced to look like actual hand-written bits of parchment.  This theme is repeated throughout the collection; we get lots of different types of correspondence and notes and some of them are lovingly crumpled to really sell the idea that these things have come from a world of fantasy.

We get very well produced A4 maps in this folder which complement another part of this set that was too big to fit in the box. This set comes with maps, big and small. The A4 battle-maps are clearly intended as player hand-outs for the table. They’re places such as The Goblin Market, a Palace of Hearts Desire and the Carnival’s own Big Top. You also get poster-sized maps, which come in a very sturdy (and bright red) poster tube. Some of these are intended to be used with miniatures, but some of them are just designed to spark the imagination. There’s a gorgeous canvas map of the land of Prismeer that would good in a frame and a map of the Carnival itself produced on canvas paper. It’s all strong, high quality stuff. 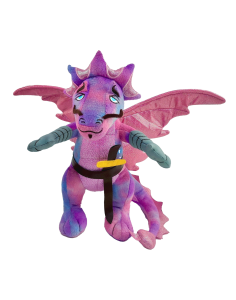 Other ‘outside the box’ items include fairy wings and a dragon.  Specifically, the fairy wings are these lovely gossamer things of the sort you may have seen at delightful parties.  These represent the wings the characters get when they enter the Witchlight Carnival, and they’re fun and surprisingly comfy.  The dragon is a well produced plush of Sir Talavar, an actual fairy dragon they meet in the campaign. You can use this to represent the character or as an in-game carnival prize , or both.  It’s very cute, is quite pink and sparkly, comes with posable wings and has a moustache. It instantly put is in mind of Sir Didymus from the movie Labyrinth, which we are sure is intentional.

We also get a box of 20 miniatures, provided by Wizkids. They’ve picked all the key figures from the game, they go well with the posters and they’re pre-painted models. They look great, the Jabberwocky is especially crazy looking and the detail is fantastic.  Some of them tiny, others huge, but all of them evocative of the world your explore in this game. 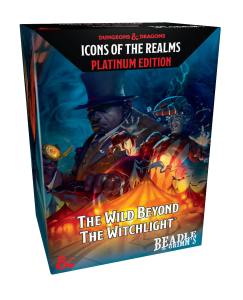 Diving back into the big red box, we get ‘carnival style’ flyers and cards for events at the Witchlight Carnival. These look like the sort of thing you’d find at a magical reality spanning carnival that has Snail Races and mystical carousels, as well as a tools for Dungeon Masters to track various story events.  Another hand-out are actual tickets for the carnival. You can tear them/stamp them like real tickets and again, they feel like they’ve come from somewhere else. 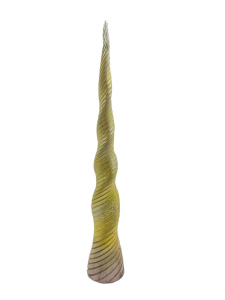 They’re just big enough that your players will clutch them in their hands as their characters explore the carnival.

We also get wanted posters, notes, a poster for the carnival and so on.  There’s also a ‘sun and moon’ bag, of the sort you’d keep dice or jewellery in.  This again adds a physical thing to draw the players in during one of the more ‘theatrical’ scenes in the adventure. Inside the bag are ‘prompts’ written on little bits of paper, which will come in handy during that scene.

The box contains a special edition of the book, which rather than a hard-cover is divided into six soft-cover books. This used to be standard practice for RPG supplements back in the day and it’s one many gamers rather miss. The advantage of having the book divided into six lovingly reformatted sections is that you can the book round without worrying the players will open the wrong page. It also makes it easier to read in bed, if that’s your thing. 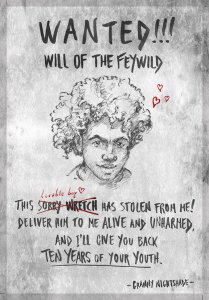 Talking of making the Dungeon Master’s life easier, the box also contains a referee’s screen – lovely picture on the side you point at the players and lots of useful charts relevant to the campaign. Again, it's designed specifically for this entire experience.  We also get 60 Encounter cards, which put monster rules at the Dungeon Master’s finger tips.

As well as this, a deck of magic item cards is provided,  for ease of access during the game. On top of all that, there’s a collection of art cards pulled from the book, to make it easier to show your players exactly what a walking spoon (or giant sea serpent) looks like.

The box also has three ‘trinkets’ – a representation of the Witchlight Weathervane,  the Valor’s Call badge that features in a very cool and retro part of the campaign and ‘completion coin’, which is a token that can be used to indicate certain game mechanics, used as a D2 or just kept as a reminder of the campaign. 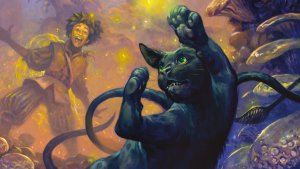 Oh, and finally, Beadle and Grimm have added some bonus encounters and some pre-generated characters. The encounters ‘smooth’ some of encounters in the core book, just in case your players decided to explore odder parts of the game and the pre-gens are very well suited for the entire adventure.

This is the best box B&G have produced thus far. It’s pricey, but you get a lot of stuff. When you consider that an adventure like Witchlight will take months to play and is intended to entertain three to six people, it’s well worth picking up, especially if you’re the sort of Dungeon Master with a very busy life but you do love to entertain your players. D&D is a game that requires nothing but your imagination, but if you can afford to splash out, it’s well worth it.

Warhammer: The Horus Heresy – A...

Well realised and highly successful franchises tend to not only have their ...