The grim ‘dark ages in cursed space’ franchise Warhammer 40,000 has had a rough ride when it comes to on-screen adaptations. This gothic, atmospheric setting is mostly told through books, art and painted models. Games Workshop have had some pretty gross mis-steps in an attempt to turn their world-famous product into a movie.  Angels of Death – Final Cut  is arguably the best attempt thus far.

Angels of Death is the story of band of  space marines making the treacherous journey to their homeworld, Baal. Their space-craft, The Sword of Baal, is a giant fortress cathedral. In it are the Blood Angels, an order of knight-like, super human warriors who exist in a hostile galaxy filled with demons, alien monsters, cults and superstition. The ship travels vast distances by punching a hole through a hell-like sea of demons. When the ship emerges into real space to find safe harbour, they  become ensnared in more violence and conflict.

The entire feature is a sort of monochrome; it’s shades of black, white or red. The Blood Angels themselves are of course clad in red armour, some of their equipment flashes so brilliantly white it almost looks silver, and the abyssal black is a constant tone throughout. It looks gorgeous and combined with an appropriately gothic soundtrack, the entire thing oozes atmosphere. 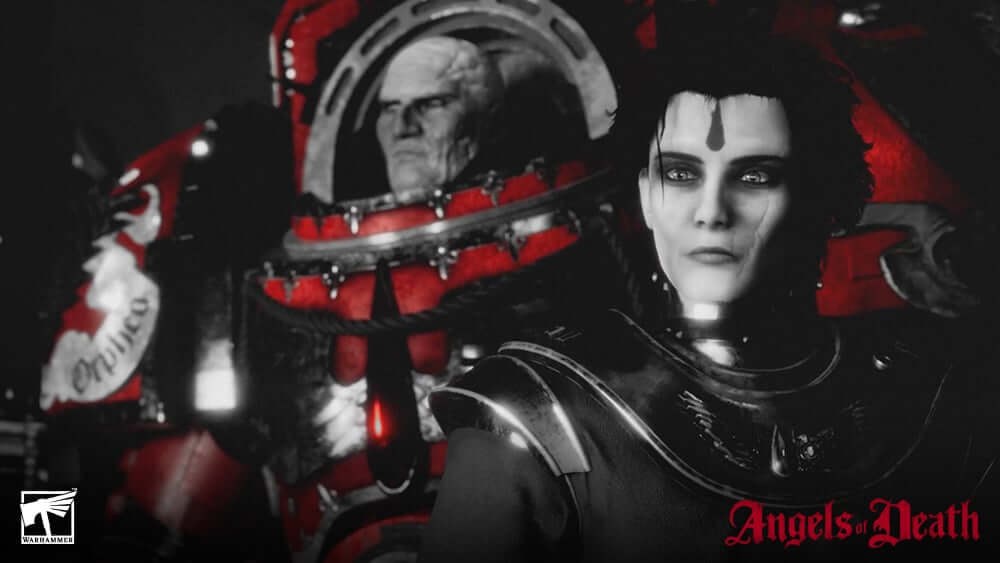 The two directors, Boman Modine and  Richard Boylan are clearly no strangers to horror, gore or action and they handle these elements brilliantly. Fan favourite voice actors such as Gareth Armstrong and Toby Longworth give very notable performances. Penelope Rawlin’s is particularly notable as Livia, a hard nosed ship’s mistress who seems the sanest character in the entire movie. The acting is strong, though the characters themselves are deliberately narrow; the grim darkness of the 41st millennium, no one has time for hobbies or a decent work/life balance, after all.

Coming in at about 2 hours and 40 minutes, Final Cut is the Angels of Death animated series spliced together into one epic movie. The show so far only been available via Games Workshop’s bespoke streaming service, Warhammer Plus. Which is a pity, as it really does need a big screen to be appreciated, we do hope the powers that be in Nottingham decided to show it at a festival or two.

Parts of the story are very, very steeped in lore, though it doesn’t get in the way of actual story. The Blood Angels themselves have a back-story filled with mysticism and sacrifice and this is built into the story itself; the result tends to be some very pretty (and weird) visuals which will mean nothing to casual viewers and delight fans.

It is, a little long, but then it is several episodes spliced together. The pacing is good, the action is very pretty and it's nice to see a certain monster get to run around and cause havoc.  It does work as a single coherent movie, but don’t forget to bring snacks.