First there was House of 1,000 Corpses. Then there was The Devil’s Rejects. Now, writer-director Rob Zombie presents the next blood-soaked chapter in the most violent crime saga in movie history, 3 from Hell. And we have three Blu-rays to give away to you lucky people.

Here's the question to answer for your chance to win :

What Character did the late and also great Sid Haig play in House of 1,000 Corpses?

Email your answer, along with your address details, to comp@starburstmagazine.com labelled '3 FROM HELL' before midnight on  OCTOBER 30TH

From the press release

After barely surviving a furious shootout with the police, Baby Firefly (Sheri Moon Zombie), Otis Driftwood (Bill Moseley) and Captain Spaulding (Sid Haig) are behind bars. But pure evil cannot be contained. Teaming up with Otis’ half-brother Wilson (Richard Brake), the demented Firelfly clan are back to unleash a whole new wave of death and depravity. A firestorm of murder, madness and mayhem will be released in this terror ride to Hell and back. 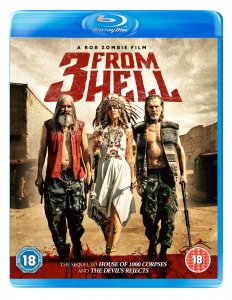 LIONSGATE/STARBURST do not accept any responsibility for late or lost entries due to the Internet or email problems. Proof of sending is not proof of receipt. Entrants must supply full details as required on the competition page, and comply with all rules to be eligible for the prizes. No responsibility is accepted for ineligible entries or entries made fraudulently. Unless otherwise stated, the Competition is not open to employees of: (a) the Company; and (b) any third party appointed by the Company to organise and/or manage the Competition; and (c) the Competition sponsor(s). This competition is a game promoted STARBURST. STARBURST's decision is final in every situation and no correspondence will be entered into. STARBURST reserves the right to cancel the competition at any stage, if deemed necessary in its opinion, and if circumstances arise outside of its control. Entrants must be UK residents and 18 or over. Entrants will be deemed to have accepted these rules and to agree to be bound by them when entering this competition. The winners will be drawn at random from all the correct entries, and only they will be contacted personally. Prize must be taken as stated and cannot be deferred. There will be no cash alternatives. STARBURST routinely adds the email addresses of competition entrants to the regular newsletter, in order to keep entrants informed of upcoming competition opportunities. Details of how to unsubscribe are contained within each newsletter. All information held by STARBURST will not be disclosed to any third parties

Win a Copy of SNOWPIERCER the Movie o...

We’ve teamed up with Lionsgate to give you a chance to win a copy of the ...

We’ve got two Blu-ray copies of Star Wars: The Rise of Skywalker to give ...