We have teamed up with Eureka once more but this time to give you a chance of winning the spiritual Buddhist fable RAINING IN THE MOUNTAIN!

It is out now as part of the MASTERS OF CINEMA range in a Dual Format (Blu-ray & DVD) edition but we have three of these sets to give away in the meantime.

To be in with a chance of winning, simply answer the very tenuous question below:

Which movie below stars Prince as 'The Kid'

C) Singing in the Rain

Send your answer, along with your address details, to comp@starburstmagazine.com labelled MOUNTAIN before midnight on MARCH 10TH 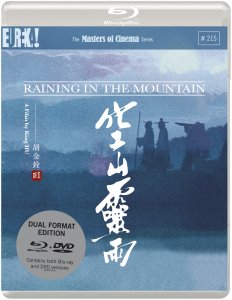 FROM THE PRESS RELEASE:

Eureka Entertainment to release RAINING IN THE MOUNTAIN, King Hu’s engaging and spiritual fable, as part of The Masters of Cinema Series in a definitive Dual Format (Blu-ray & DVD) edition on 24 February 2020. Available on DVD and Blu-ray for the first time in the UK, and presented from a new 2K restoration.  The first print-run of 2000 copies will feature a Limited Edition O-card Slipcase.

Set in a remote Buddhist monastery in 16th Century China, Raining in the Mountain deals with a power struggle that ensues when the Abbot of the Three Treasures Temple announces his imminent retirement.

The ageing Abbot invites three outsiders to advise him on the critical choice of appointing his successor: Esquire Wen, a wealthy patron of the monastery, General Wang, commander-in-chief of the local military, and Wu Wai, a respected lay Buddhist master. Within the monastery, several disciples aspiring to the position begin to collude individually with Esquire Wen and General Wang. But these two invited advisers have come with seditious intent, scheming to obtain the priceless scroll housed in the monastery: the scriptural text of “The Mahayana Sutra,” hand-copied by Tripitaka. Meanwhile, convicted criminal Chiu Ming has arrived at the monastery to atone as a monk. He is assigned to safeguard the scroll at the house of scriptures, and encounters thieving rivals White Fox who poses as Esquire Wen’s concubine and General Wang’s fearsome Lieutenant Chang, who originally framed Chiu Ming for the crime he did not commit.

Selected as one of the Best 100 Chinese Motion Pictures by the Hong Kong Film Awards in 2005, The Masters of Cinema Series is proud to present King Hu's Raining in the Mountain on Blu-ray and DVD for the first time in the UK, from a new 2K restoration completed in 2018 by the Taiwan Film Institute.

RAINING IN THE MOUNTAIN, King Hu’s masterfully choreographed, spiritual Buddhist fable, is OUT NOW on Dual Format and can be purchased here https://amzn.to/36UCY4n

EUREKA/STARBURST do not accept any responsibility for late or lost entries due to the Internet or email problems. Proof of sending is not proof of receipt. Entrants must supply full details as required on the competition page, and comply with all rules to be eligible for the prizes. No responsibility is accepted for ineligible entries or entries made fraudulently. Unless otherwise stated, the Competition is not open to employees of: (a) the Company; and (b) any third party appointed by the Company to organise and/or manage the Competition; and (c) the Competition sponsor(s). This competition is a game promoted STARBURST. STARBURST's decision is final in every situation and no correspondence will be entered into. STARBURST reserves the right to cancel the competition at any stage, if deemed necessary in its opinion, and if circumstances arise outside of its control. Entrants must be UK residents and 18 or over. Entrants will be deemed to have accepted these rules and to agree to be bound by them when entering this competition. The winners will be drawn at random from all the correct entries, and only they will be contacted personally. Prize must be taken as stated and cannot be deferred. There will be no cash alternatives. STARBURST routinely adds the email addresses of competition entrants to the regular newsletter, in order to keep entrants informed of upcoming competition opportunities. Details of how to unsubscribe are contained within each newsletter. All information held by STARBURST will not be disclosed to any third parties

We’ve got one Blu-ray copy of THE WOMAN IN BLACK to give away in our ...