We’ve teamed up with Demon Records to give away ONE copy of the newly released DOCTOR WHO: THE PARADISE OF DEATH AND THE GHOSTS OF N-SPACE LP! It looks absolutely brilliant!

To be in with a chance of winning, just answer the question below and email comp@starburstmagazine.com with the heading ‘DOCTORWHO’. Entries must arrive before 11:59 pm on March 10th, 2019.

Who starred alongside the wonderful Elizabeth Sladen in an episode of the Sarah Jane Adventures entitled Secrets of The Stars as an evil Psychic medium? 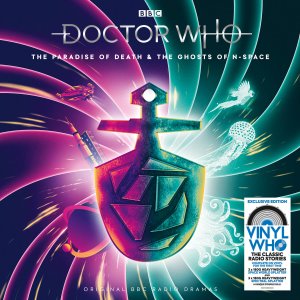 “We shan't have any more trouble from that meddling Doctor!”

The Paradise of Death reunites the Doctor, Sarah Jane Smith and the Brigadier for an adventure that takes them from Hampstead Heath to the far-flung planet of Parrakon, where they face dangers aplenty from the hostile Freeth and Tragan.

In The Ghosts of N-Space, which features Jon Pertwee’s final performance as the Doctor, the Time Lord is in Sicily where he discovers trouble in the form of spectral monsters from another dimension.

Demon Records and STARBURST do not accept any responsibility for late or lost entries due to the Internet or email problems. Proof of sending is not proof of receipt. Entrants must supply full details as required on the competition page, and comply with all rules to be eligible for the prizes. No responsibility is accepted for ineligible entries or entries made fraudulently. Unless otherwise stated, the Competition is not open to employees of: (a) the Company; and (b) any third party appointed by the Company to organise and/or manage the Competition; and (c) the Competition sponsor(s). This competition is a game promoted STARBURST. STARBURST's decision is final in every situation and no correspondence will be entered into. STARBURST reserves the right to cancel the competition at any stage, if deemed necessary in its opinion, and if circumstances arise outside of its control. Entrants must be UK residents and 18 or over. Entrants will be deemed to have accepted these rules and to agree to be bound by them when entering this competition. The winners will be drawn at random from all the correct entries, and only they will be contacted personally. Prize must be taken as stated and cannot be deferred. There will be no cash alternatives. STARBURST routinely adds the email addresses of competition entrants to the regular newsletter, in order to keep entrants informed of upcoming competition opportunities. Details of how to unsubscribe are contained within each newsletter. All information held by STARBURST will not be disclosed to any third parties

Joseph Trapanese | LADY AND THE TRAMP

Despite hailing from Jersey City, New Jersey, and only being 35 years old, ...

Starburst Slot is one of the most popular slot games available to players ...