We’ve got one Blu-ray copy of THE WOMAN IN BLACK to give away in our competition and as if that wasn't enough the prize also comes with an exclusive 'CRYTHIN GIFFORD' Railway Sign Limited to just 20 pieces! 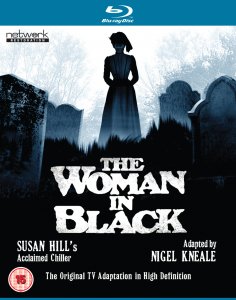 To be in with a chance to win a copy, just send your answer to the question below to comp@starburstmagazine.com with the header ‘WOMANINBLACK’ to arrive before 11:59pm on Sunday, August 9th, 2020

Which 'Harry Potter' actor starred in the 2012 version of The Woman In Black?

Nigel Kneale’s spine-tingling adaptation of Susan Hill’s gothic novel The Woman in Black creeps onto Blu-ray for the first time ever in this restored special edition, with an audio commentary from horror experts Mark Gatiss (Sherlock, The League of Gentlemen), Kim Newman (author, Anno Dracula) and star Andy Nyman (Ghost Stories). When a friendless old widow dies in the seaside town of Crythin Gifford, a young solicitor is sent in to settle her estate. Following cryptic warnings from the locals regarding the terrifying history of the old woman's house, he soon begins to see visions of a menacing woman in black... Atmospherically directed by BAFTA-nominated Herbert Wise and starring Adrian Rawlins (Harry Potter franchise, Chernobyl) as the unfortunate young solicitor and Pauline Moran as  the terrifying apparition, this unsettling drama remains a high watermark for ghost story adaptations on British television and still retains its significant potential to shock. Unseen for decades, Nigel Kneale's chilling adaptation of Susan Hill's best-selling novel was first broadcast on ITV in 1989 and has been painstakingly-restored by Network's awardwinning in-house restoration team in high definition from original film elements for this longawaited release.

AVAILABLE EXCLUSIVELY FROM THE NETWORK WEBSITE 10 AUGUST Starring Adrian Rawlins (Harry Potter franchise, Chernobyl), Pauline Moran (Byron), Bernard Hepton (Get Carter) and Andy Nyman. Written by Nigel Kneale (The Stone Tape, Quatermass and the Pit) and directed by Herbert Wise (I, Claudius, Once They Marched Through a Thousand Towns).