We've teamed up with the ever wonderful Eureka to bring you a chance of winning one of three Blu-rays of the cult classic 976-EVIL.

To be in with a chance of winning, simply answer the question below:

Robert Englund directed this movie but what character is he more commonly associated with?

Send your answer, along with your address details, to comp@starburstmagazine.com labelled EVIL-976 before midnight on OCTOBER 30TH.

Eureka Entertainment to release 976-EVIL, an outrageously enjoyable ‘80s horror from Robert  Englund, on Blu-ray for the first time in the UK, as part of the Eureka Classics range. Available from 19 October 2020, featuring a Limited Edition O-Card slipcase and Collector’s Booklet [First Print Run of 2000 copies ONLY].  High school underdog Hoax (Stephen Geoffreys - Fright Night) fills up the idle hours in his seedy little hometown fending off the local leather-jacketed thugs, avoiding his overbearing mother (Sandy Dennis) and dreaming of a date with trailer park temptress Suzie (Lezlie Deane), But his quietly desperate life takes a terrifying turn when his cousin introduces him to an unusual new hobby – phoning in for his “horrorscope”. Hoax is hooked up with a compellingly hideous demonic force that slowly begins to overtake his entire life and now there’s more than just a phone bill to pay for anyone who ever dared cross “the neighbourhood nerd”. Co-written by Brian Helgeland (L.A. Confidential, Mystic River) and featuring incredibly practical effects work from Robert Kurtzman and Howard Berger, Eureka Classics is proud to present 976-EVIL on Blu-ray for the first time in the UK.   BLU-RAY EDITION SPECIAL FEATURES:    KEY SELLING POINTS: 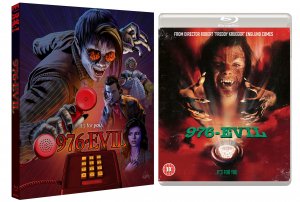 EUREKA/STARBURST do not accept any responsibility for late or lost entries due to the Internet or email problems. Proof of sending is not proof of receipt. Entrants must supply full details as required on the competition page, and comply with all rules to be eligible for the prizes. No responsibility is accepted for ineligible entries or entries made fraudulently. Unless otherwise stated, the Competition is not open to employees of: (a) the Company; and (b) any third party appointed by the Company to organise and/or manage the Competition; and (c) the Competition sponsor(s). This competition is a game promoted STARBURST. STARBURST's decision is final in every situation and no correspondence will be entered into. STARBURST reserves the right to cancel the competition at any stage, if deemed necessary in its opinion, and if circumstances arise outside of its control. Entrants must be UK residents and 18 or over. Entrants will be deemed to have accepted these rules and to agree to be bound by them when entering this competition. The winners will be drawn at random from all the correct entries, and only they will be contacted personally. Prize must be taken as stated and cannot be deferred. There will be no cash alternatives. STARBURST routinely adds the email addresses of competition entrants to the regular newsletter, in order to keep entrants informed of upcoming competition opportunities. Details of how to unsubscribe are contained within each newsletter. All information held by STARBURST will not be disclosed to any third parties

We’ve teamed up with Eureka! Entertainment to giveaway three copies of ...

Win a Copy of Horror Hit RELIC on Blu...

Thanks to our good friends at Signature Entertainment, we have two copies ...