Classic Gerry and Sylvia Anderson series UFO lands on Horror Channel in October, so we take the opportunity to look at the history of the series…

In January 1969, an incredible era of British television came to an end when the puppet studios of Century 21 Productions were closed down. The final Supermarionation TV series produced by the company, The Secret Service, had a far shorter lifespan than its predecessors, lasting only 13 episodes compared to the usual 30-40 episode length from past efforts. The exact story as to why The Secret Service came to a premature end may never be known. Puppetmaster Gerry Anderson often told the story of showing the first finished episode to ITC’s Lew Grade, the financial backer of his work during this era, and Grade’s reaction being less than positive.

Stanley Unwin’s trademark gobbledygook language of Unwinese, utilised as part of the show’s premise, is the given reason for the show’s ultimate failure. However, one can’t help but wonder why Lew Grade would have commissioned such a series when he must have known full well what he was signing up for. Given Gerry’s long-held ambitions during this time to move permanently away from the super marionettes that had given him great success and greater frustration, one wonders if The Secret Service’s polarising set-up was a deliberate, tactical shot in the foot made to convince Grade that the era of Supermarionation was over. It had been three years since Grade brought the axe down on Thunderbirds and nothing produced since had quite managed to overtake that juggernaut’s popularity. Still, Anderson remained focused, resolute, determined to make the next big thing. During the same month the puppet studios finished, January 1969 brought with it the finished script for the first episode of Century 21’s new venture – UFO. 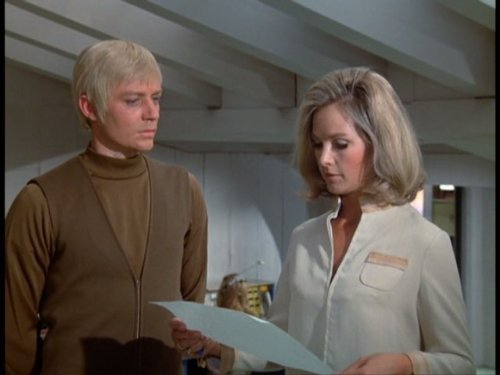 Century 21 Productions were no strangers to filming in live-action at this point. The much-maligned Crossroads to Crime and the thematic precursor to UFO, Doppelgänger, had given Gerry and Sylvia and their crew some tangible experience in working with humans. Numerous live-action inserts of hands and feet are scattered throughout the Supermarionation shows, and The Secret Service can really be described as only half being filmed in Supermarionation. But UFO marked more than the great leap forward into working with humans rather than puppets. Everything about UFO is more sophisticated than what had come before. Targeting a more adult audience than the puppet shows had done, UFO remains a thematically robust, narratively engaging and sometimes quite emotional and bleak entry in British sci-fi, propelled by a renewed vigour in the special effects department, more complex story-telling and commanding performances from its cast.

The masterful nature of UFO partly lies in the simplicity of its premise. In terms of how the story of UFO is established, the series does nothing that past Supermarionation shows had already toyed with, to the point where it hasn’t escaped fans’ notice that it’s essentially a live-action redressing of Captain Scarlet and the Mysterons. Set in the then-futuristic timeline of 1980, the planet Earth is oblivious to a secretive and slow-moving alien invasion of humanoid creatures coming to Earth and robbing human beings of their organs. To combat this cryptic menace, SHADO is formed by the world’s governments, an acronym for Supreme Headquarters Alien Defence Organisation. Armed with a fantastic fleet of futuristic vehicles, Moonbases and personnel, SHADO uses all of its might to regularly defend the Earth from a bizarre and unpredictable war of nerves. SHADO’s line-up of vehicles is essentially a military version of International Rescue. The sea-faring Skydiver with its Fireball Junior/MEV-esque Sky 1, the ground-based, pod vehicle-styled SHADO Mobiles, Moonbase Interceptors, Lunar Modules, and further classic craft help to reflect the global and cosmic reach of SHADO, designed by Anderson regulars Derek Meddings and Mike Trim. 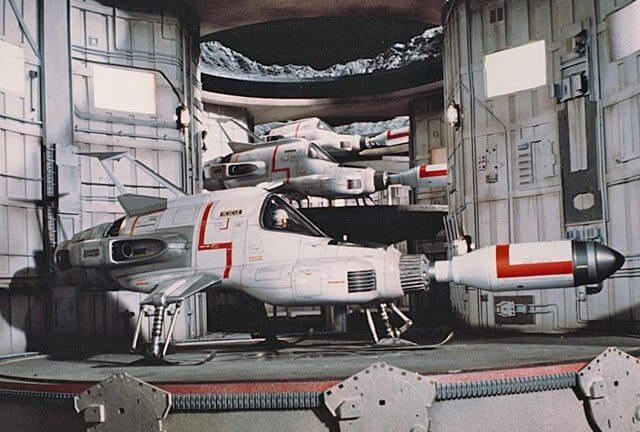 Armed with this simple premise, the everlasting enjoyment in watching UFO isn’t a case of what’s going on, but rather, how it’s going on. Throughout the 26 episodes that make up the series, UFO routinely took advantage to explore the human fallout of a single military outfit forced with the impossible task of fighting a war they can’t predict. It’s not enough for these aliens to simply send their craft into Earth’s atmosphere on a path of destruction – mind control and blackmail are utilised too, while the consequences triggered by the alien attacks causes human friendships and romances to be scuppered in equal measure. This logic helps to contextualise one of the more lacking elements of the series, which is how we never really learn much of the alien race themselves who choose Earth as their planet to discreetly invade and harvest the biological make-up of humanity. They have no title, no distinction, no genuine identity. While it’s understandably frustrating that we come away from the series no wiser as to the alien’s origin, the emphasis on the human side of things is evident that this was a creative choice on Gerry and Sylvia’s part (along with Reg Hill) to focus on the difficulties faced by SHADO in fighting this war, along with script editor Tony Barwick, a regular collaborator since Thunderbirds having served that role on Captain Scarlet, Joe 90, and The Secret Service.

At the centre of this maelstrom is Commander Ed Straker, the leader of SHADO. With a smouldering performance from Ed Bishop (who’d previously lent his vocal talents for Captain Blue), Straker’s relentless yet weary determination to lead his organisation to victory in saving humanity is given palpable impact by Bishop’s delivery. The human tragedy of UFO is crystallised within this character, with numerous episodes dedicated to showing how his commitment to SHADO leads to the breakdown of his former life. Episodes Confetti Check A-O.K. and A Question of Priorities show him to be a former family man in his previous role in the US air force, yet the exhausting formation and demanding duties of SHADO tears his marriage down, culminating in the accidental death of his son. Bishop’s performance is an undisputable high-point of UFO. 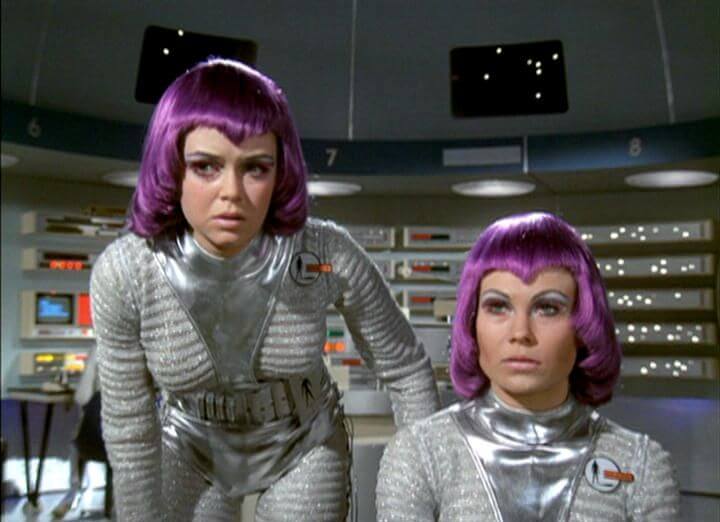 Unintentionally enhancing Ed’s position as the main character of the show is the revolving door of supporting characters, brought on by actors either leaving the series during its making or the temporary shut-down of production during the series’ run. The making of UFO initially spanned from April 1969 to the year’s end at MGM-British Studios. A five-month wait was endured when the studio closed down, during which time series regulars George Sewell (Colonel Alec Freeman) and Gabrielle Drake (Lt. Gay Ellis) no longer became available. During this downtime, the show underwent a tonal change. Episodes were now flourishing into much wilder scenarios, embracing a much stronger sci-fi ambition, which Bishop would later recall in a 1982 interview with Starlog as an improvement of the series. “The acting, the dialogue, the cutting were all a lot quicker,” he recalls, “and the storylines much stronger”. The later days of UFO gave us such gems as Mindbender, Timelash, The Long Sleep, and Reflections in the Water. Themes of time manipulation, living bombs, and drug-taking populated these episodes, making UFO go out in a blaze of manic glory while still maintaining its sombre attitude.

REFLECTIONS IN THE SERIES

With Gerry Anderson’s thematic vision and Sylvia Anderson’s sharp, vibrant eye for appealing visuals in production design, UFO fired, mostly, on all cylinders. Not every episode is a classic, not every character is memorable and not every plot point is fully explored, but UFO is unshakeable in being one of the best things Gerry Anderson ever did. Speaking to this very magazine in 1979, Gerry commented fondly on the series, describing it as “ahead of its time”. Pre-production on a proposed second series, tentatively titled UFO: 1999, were scuppered when the show’s ratings dipped in America, forcing Gerry and his team to transform their efforts into an entirely new affair, resulting in Space: 1999. 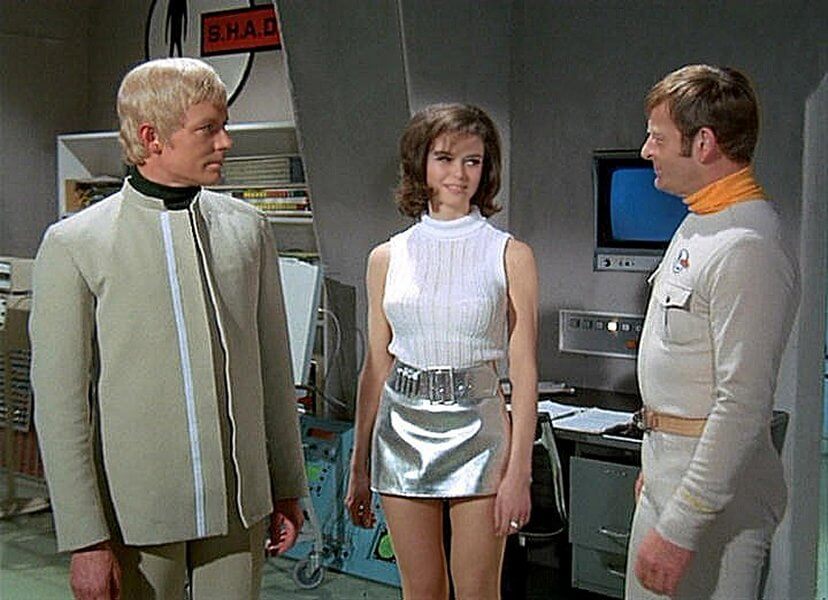 There’s something bittersweet in how the final work from Century 21 Productions was the kind of TV series Gerry had harboured a long-gestating desire to make throughout his initial Supermarionation career. For all of Gerry’s and Century 21’s efforts, UFO didn’t initially meet with much fanfare. Gerry recalled in his 2002 biography how critics didn’t entirely slate the series, but clearly had trouble accepting this new, live-action venture from a producer so tied to his puppet roots. Broadcasters were equally perplexed by this more adult offering from an enterprise famed for their marionettes, resulting in UFO being thrown around different timeslots in a cursed effort to find a suitable audience. The passage of time has managed to cement that audience for UFO, albeit to primarily a cult status. From the thrilling practical effects to the morose stories, UFO remains one of the strangest and most compelling sci-fi sagas Gerry Anderson ever made.