We all love the Austrian Oak and recognise that he’s made some fantastic films over his illustrious career. However, we thought it was high time we celebrated the less successful and more obscure Schwarzenegger films to show that there’s even more to enjoy from the former Governor... 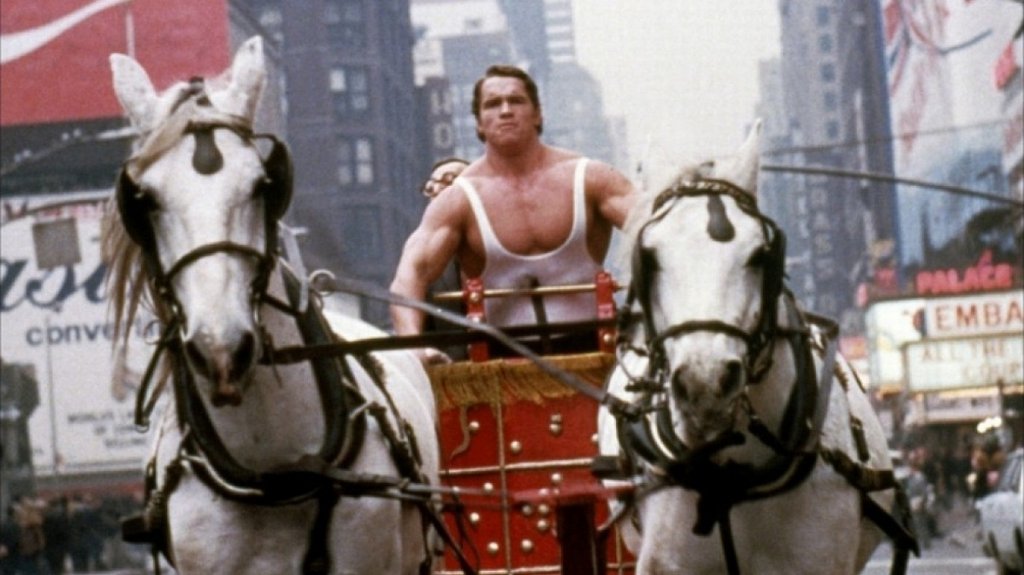 Bear with us on this one! Arnold’s first starring role, where he is credited as Arnold Strong (Mr Universe) is a technical disaster. Mistakes are left in, we switch from day to night in a single shot and there simply isn’t enough footage to fill its 90-minute run time. Despite this, it is a complete riot, with Arnold’s Hercules popping over to New York after he gets bored with Mount Olympus (filmed in what looks like a communal garden). He teams up with Pretzie (Arnold Stang, who is channelling Woody Allen at every opportunity), acts like a fish out of water, loses his powers for about 5 minutes, and then beats up some thugs in a warehouse. The standout is Hercules fighting an escaped bear in Central Park - it is clearly a man in a suit, who throws a right cross at one point. Simply wonderful. Arnie was originally dubbed, which when you hear his voice is understandable, as he is like a stone with muscles, making his achievements over the coming decades even more remarkable. Enjoy responsibly with a group of like-minded fools. 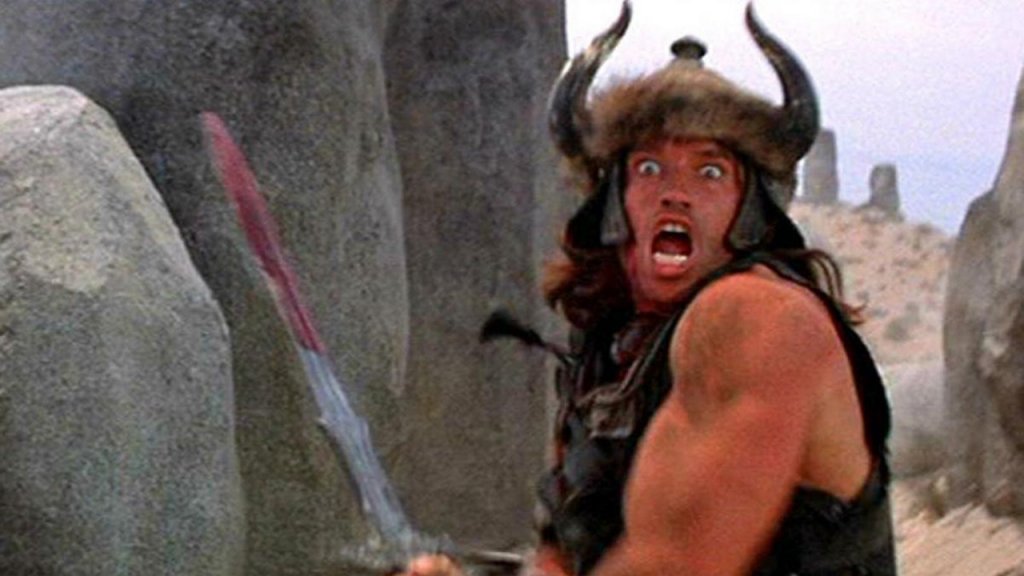 This adaptation of Robert E. Howard’s titular barbarian has been dismissed as ‘80s cheese, however it is hugely underrated. A lot of effort went into its production and it is written by John Milius and Oliver Stone. The ‘Hyborian’ age feels vast and unforgiving (Spain providing the exterior shots) and Arnold is perfectly cast, his body and mannerisms skilfully capturing the hulking barbarian. His adventures also feel suitably exciting and varied – from competing as a gladiator, having sex with a witch, and being crucified and returning from the dead - you certainly get your money’s worth. Conan’s quest to defeat the evil snake cult who made him an orphan, is a genuine struggle - well anything that involves being nailed to a tree would be! However, the film’s real genius is to concentrate on its action and soundtrack, with large swaths of the conclusion containing no dialogue (John Milius must have watched Hercules in New York). It is only with hindsight and after watching the woeful 2011 effort, that the quality of this film can be truly appreciated. Epic, brutal and fun, just like Arnie himself.

Best Line: “Crush your enemies, see them driven before you, and hear the lamentation of the women!” 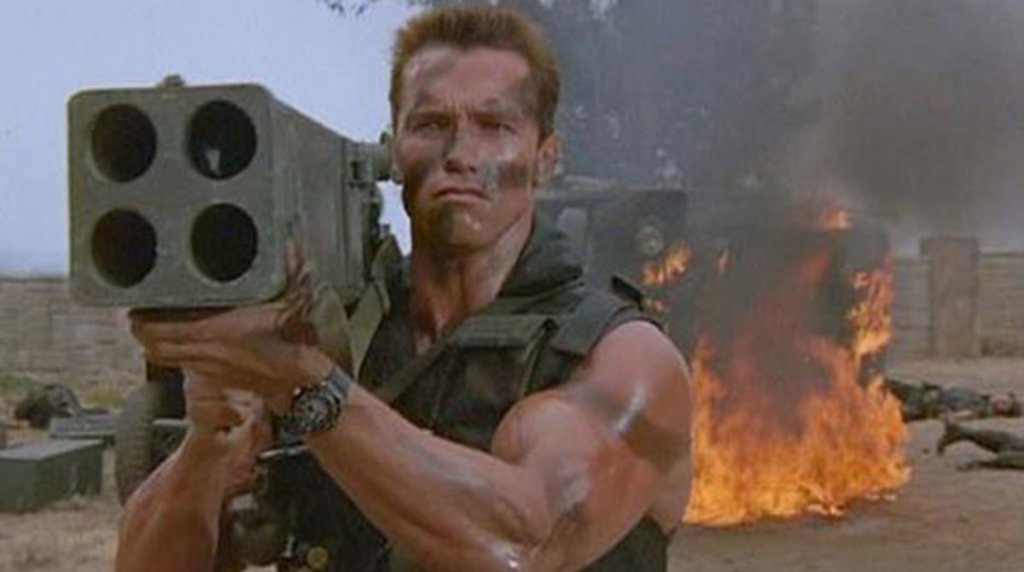 Even though this has become a cult classic with students and Schwarzenegger fans alike, it has largely always been seen as a cheap Rambo knock off. Well, it is, but a fantastic one. Retired Colonel - John Matrix - must rescue his daughter after a wannabe dictator attempts to blackmail him into assassinating the leader of Val Verde (a fictional South American country, used in several films written by Steven E. de Souza). John demonstrates superhuman strength by tipping a Porsche back on its wheels and ripping a metal padlock from a door. After bringing along Rae Dawn Chong’s excitable flight attendant for the ride, it ends with a bombastic rescue mission with Matrix in full military garb, taking out soldiers with guns, grenades, and a pitchfork. Despite all this fun, Vernon Wells maniacal villain, Bennett, is the star of the show. He was kicked out of Arnie’s old unit for undisclosed reasons, he is crazy and camp (wearing a kind of string vest and leather pants) and hams up every scene he is in. Hilariously he is shown to be an equal match to Matrix in a fistfight – Arnie’s Adonis pitched against a Dad bod. What is a strange casting choice turns out to be the films trump card, no one could match John Rambo, he clearly never came across Bennett.

Best Line: (After throwing a steaming pipe into Bennett’s chest) “Let off some steam Bennett.”

Famously underappreciated and undervalued at the box office, this meta-action film is smart and fun. It fabulously sends up all the action tropes that Arnie had been displaying over the previous decade, maybe too soon for audiences to appreciate. Danny (Austin O’Brien) loves the action star Jack Slater (Schwarzenegger), he is a no-nonsense cop in a series of over-the-top action pictures, where he shoots first and asks questions later. When Danny receives a golden ticket from his elderly friend, who runs an old movie theatre, he is sucked into the film to meet his hero. With such ‘80s pedigree as John McTiernan and Shane Black, who direct and write respectively, it cleverly uses all the clichés from famous cop movies, from the shouting sergeant to the death of a partner. This is especially entertaining when Jack crosses over into the real world and finds the laws are a bit different, his hand bleeding when he punches a car window, for example. Throw in Charles Dance’s over the top but genuinely intimidating villain, who thrives in the infinite possibilities of the real world, where the bad guy can win, and you’ve got a unique post-modern take on action movies. Perhaps, as the ‘90s were still profiting from such films, audiences simply weren’t ready. With the benefit of hindsight, it’s certainly worth a re-watch.

Best Line: (Arnie as Jack Slater performing Hamlet with a cigar and grenade) “To be or not to be? Not to be.” (Throws the grenade) 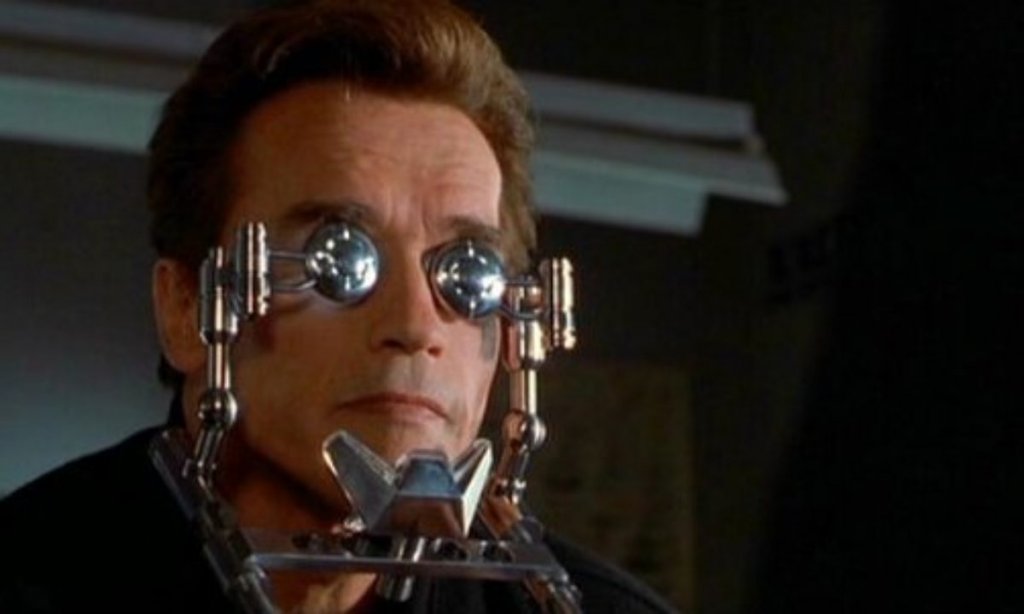 Coming in the twilight of Arnold’s career, this Sci-Fi action flick may appear silly, but it’s wonderfully enjoyable and surprisingly raises some interesting philosophical questions. Released only a few years after Dolly the Sheep was cloned, the film takes this to the next level, stating that ‘In the near future’ cloning animals is commonplace, human cloning is possible, but has been banned by the ‘6th Day Law’ (referencing God creating man on the 6th Day). We meet Arnie’s Adam Gibson, a helicopter pilot and technophobe (a wonderful cliché for protagonists living in the future) he lives in a world of computer fridges and cloned pets, with his wife and daughter. When shady billionaire Michael Drucker (Tony Goldwyn) decides to take a ride in one of his helicopters, as it’s Adam’s birthday his best friend Hank (action stalwart Michael Rappaport) takes his place. This sets off a crazy chain of events, which results in a cloned Gibson and Drucker’s ludicrous cloned cronies, trying to kill the original Adam to cover up their illegal cloning activities. The film is a thrill ride from start to finish, but gravitas is added by Robert Duvall’s cloning specialist, whose grief over the death of his own wife overshadowed his judgement. He has some genuinely touching scenes that show us the true sanctity of life. With twists galore, broken necks, car chases, and the future of humanity on the table, what more could one want from a 21st-century action film. Hercules has come a long way!

Best Line: (As Drucker lays on top of his own clone) “When I told you to go fuck yourself, I didn’t mean it literally.”

Have we missed one of your Arnie essentials? Let us know @STARBURST_Mag