With Game of Thrones, one of TV’s greatest shows ever, having come to an end with the Mother of Dragons being carried off in the talons of Drogon, we take a look back at some of the best examples of these magnificent and sadly mythical beasts in film and TV.

The Hungarian Horntail (Harry Potter and the Goblet of Fire)

Without a huge amount of screen time, the Hungarian Horntail dragon in Goblet of Fire makes a big impression. What starts as sport becomes a deadly chase through the skies and atop Hogworts, when the beast shakes off its shackles and tries its very best to fry Harry like a drumstick.

With its beaky mouth and spines like ruffled feathers, albeit deadly ones, this dragon is more birdlike in appearance than any others on this list – but a mean, prehistoric fire-breathing bird, rather than a budgie!

The 2005 CGI holds up well and the beast flies and flames with convincing gusto, although it’s actually at its most convincing when stumbling across the rooftops of Hogwarts, Harry Potter in its sights.

Why isn’t it higher on the list? Well, as Parker famously said to Brett, “You don’t have no personality.” Whilst it looks impressive enough, we don’t really ever get under its scaly skin and it’s certainly no fun. 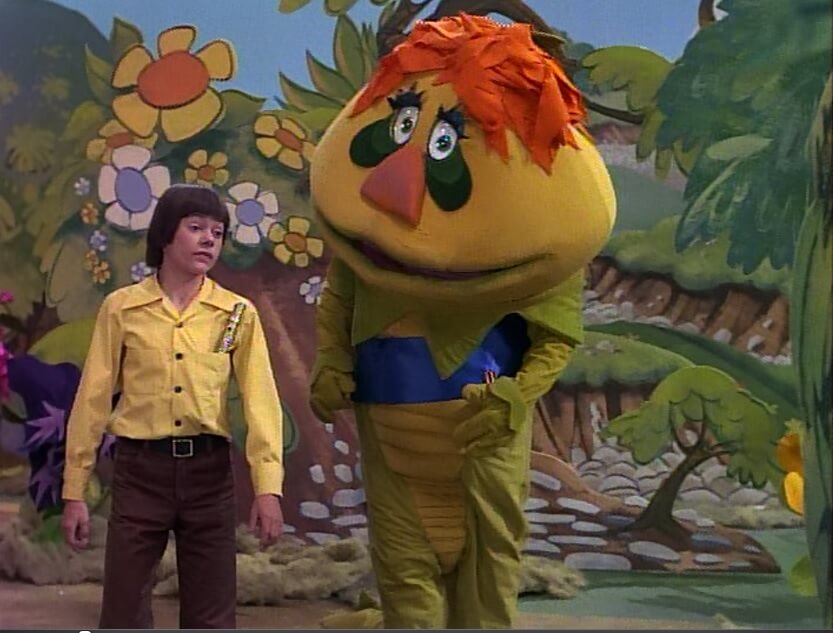 It’s time to revive the memory of this crazy, joyous and hugely (at the time) popular dragon, Pufnstuf. Never heard of him?

In 1969, this Saturday morning kids’ TV show proved so popular that it ran for the next three years and even spawned a musical film featuring Mama Cass. Starring Oliver’s Jack Wild, H.R. Pufnstuf told the tale of a young boy with a magical golden flute, enchanted away to a fantasy land where evil is represented by the cackling, broom flying Witchiepoo, and goodness by Pufnstuf, a big friendly dragon who is the Mayor of Living Island.

With its cast of life-sized puppets – Jack Wild and Witchiepoo aside – amongst dazzling psychedelic sets, H.R. Pufnstuf comes across like an hallucinogenic cross between The Magic Roundabout, Pee Wee’s Playhouse and Where the Wild Things Are. And could there be a better compliment than that?

Pufnstuf himself, basically a huge headed cushion on legs, is a bumbling sort of fellow; all kind words and fun ideas, with a heart as well stuffed as his oversized puppet head, making H.R. one of the friendliest, craziest and most loveable dragons on this list. 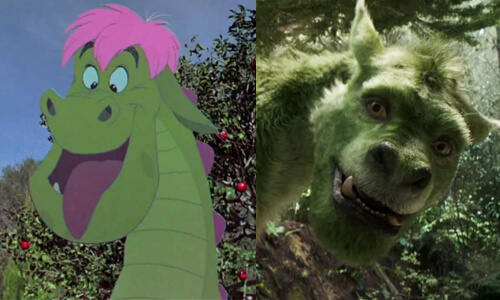 This one’s a bit of a cheat as we’re counting both the original animated Elliot and his furry CGI incarnation in the recent remake, given that, basically, they’re the same dragon.

Like Toothless (see later), Elliot is a boy’s best friend. In 1977’s version of Pete’s Dragon, the mid-century setting sees young, orphaned Pete fleeing with his ‘imaginary friend’ from his cruel adoptive family – only to find love in a new home but with a corrupt doctor sniffing after the dragon. The remake finds Pete ‘rescued’ after six years in the forest, finding a new home and proving that Eliiot isn’t imaginary, only to have hunters want to claim the dragon as their prize.

Save for the songs of the original and the ecological message of the remake, both versions of Pete’s Dragon are pretty much the same story.

What’s really interesting is how the realisation of Elliot has changed in the 40 years between the films; 1977’s Elliot is traditional animation woven nicely into the live action; 2016’s a CGI creation giving the animal fur instead of scales - Disney doesn’t want to scare the kids too much, it seems. And whilst the modern Elliot is the more ‘realistic’ and complex beast, what the films prove is that it’s the quality of the storytelling that really matters because, whether it’s a CGI marvel or a pencil and paint naive creation, we care about both. 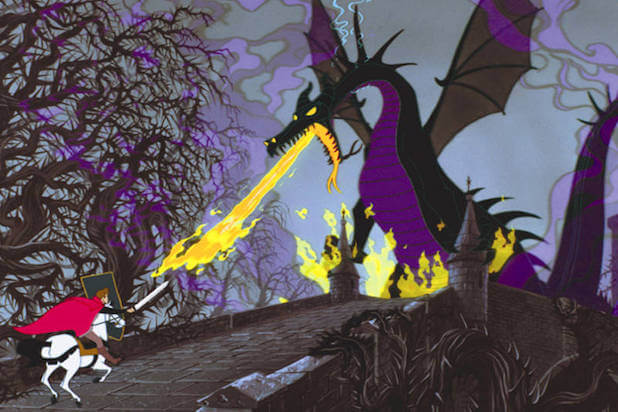 Back in the late 1950s, audiences watching Disney’s Sleeping Beauty were treated to one of the most evil villains of the studio’s canon: the wicked fairy, Maleficent. Angular, cloaked, steeped in dark magic, Maleficent cut quite the baddie, her revenge taking the form of a spell on an innocent child.

But it’s towards the end of the film when, battling to save the girl he loves, Prince Philip faces the film’s biggest baddie as Maleficent transforms into an enormous, vengeful, fire-spitting dragon; one which somehow still manages to look like its human self.

As the dragon and Prince head towards a precipice, Philip’s fate seemingly sealed as the beast prepares to fry the boy, it’s the stuff of childhood nightmares, Maleficent finally tumbling to her death having been impaled by the Prince’s sword. It’s terrifying, making Maleficent a dragon which still gives shivers to the adults first who saw it as kids.

Who could possibly fail to fall for a huge beast of a dragon with the voice of Sean Connery? And whilst this may not be the best of dragon-related films, Rob Cohen’s 1996 Dragonheart is both fun and touching, and features Oscar nominated effects.

When the world’s last dragon teams up with a washed out, redundant dragonslayer, the pair create a mutually beneficial double act where the dragon pretends to attack vulnerable villages and the slayer turns up to defeat it – all for a handsome reward, of course. For a while this all goes well, until real danger catches up with them and they have to help out for real.

Like a buddy caper where one of the buddies is a gigantic fire-breathing reptile, Dragonheart has some real charm, not least because of the excellent dragon design and effects and the genius casting of Connery – whose voicing of Draco breathes life into this early CGI creature, adding genuine chemistry to the beast/human relationships.

Toothless (the How to Train Your Dragon franchise) 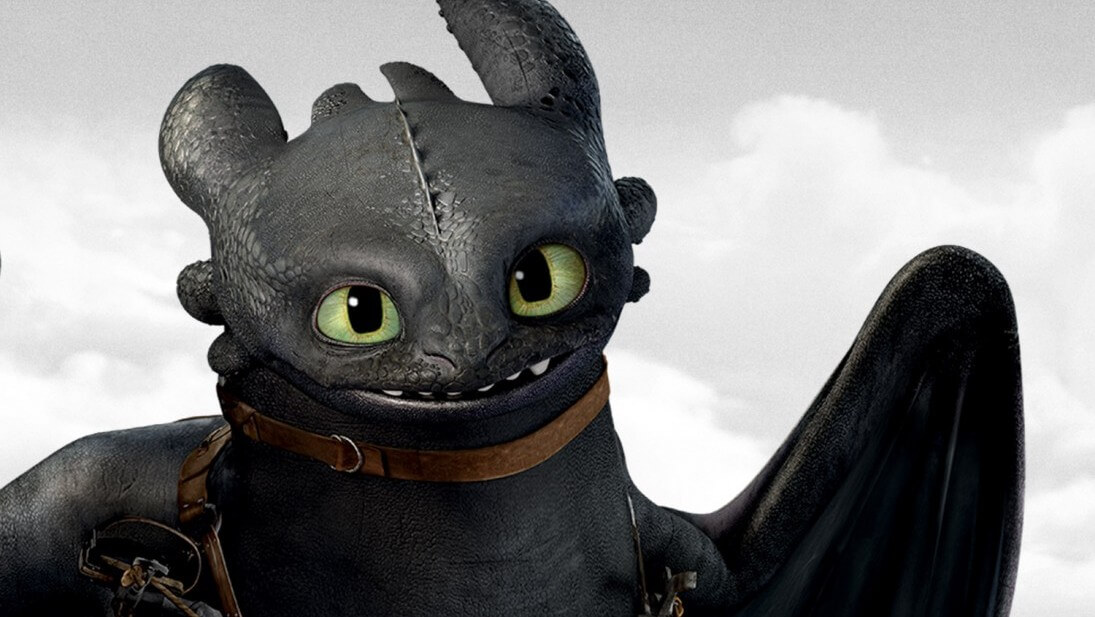 The three How to Train Your Dragon films are a joyous celebration of many things. Not least, the visual splendour of animation and the understanding of what it means to love a pet, because anyone who has ever loved a dog or cat totally gets the relationship between Hiccup and Toothless.

Whilst the two successful sequels to the original (the three films have grossed over $1 billion between them) develop the relationship between the pair, it’s in the first film that this dynamic really shines; both Toothless and Hiccup, beings out of kilter with their kind, coming together, learning to trust and, ultimately, saving both the human and dragon populations.

On a scale of mean killing machines, Toothless doesn’t even come close to getting on the list, but as a lovable, man’s best friend, childhood fantasy fulfilment dragon, Toothless leads the pack; its feline qualities of grace and those big soulful eyes inciting wonder instead of fear as it soars through the skies. 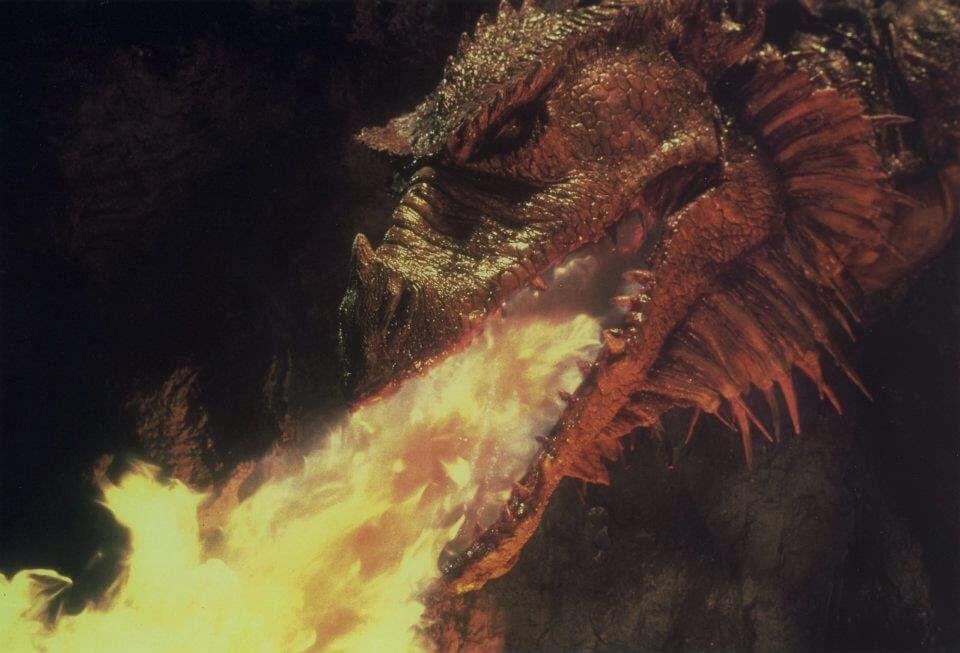 When a a King makes a pact with a dragon, offering virginal sacrifice to stop it from destroying the kingdom, a Wizard and his young apprentice vow to put a stop to things and take on the dragon’s mighty power.

Beloved by those who went to see it back in 1981, but nowadays rarely cropping up anywhere, Dragonslayer was Disney’s entry into the ‘sword and sorcery’ genre and it didn’t disappoint, at least where its hugely impressive dragon design was concerned. The combination of effects used to bring the animal to life included the brand-new go-motion technique – replacing more jerky stop-motion - plus several articulated life-size models, all coming together to make Vermithrax Pejorative one of the coolest dragons ever put to screen. Watching the dragon in flight in 1981 was seeing something more realistic than any dragon you’d seen before.

And it has the best name.

The Dragons of Reign of Fire

Earth is a world set alight by millions of dragons, pre-historic beasts which have been lying dormant since destroying the dinosaurs, waiting for a decent food supply to come along. And the food supply is us…

With a big-name cast including Christian Bale and Matthew McConaughey, this dark, dirty and serious effort from The-X Files’ Rob Bowman pitted humans against dragons like never before and, despite sniffy reviews and poor box office, is one of the most impressively thrilling dragon films ever. It’s partly because there are plenty of dragons and they do what dragons do best: fly around setting things on fire.

The quality acting helps keep things weighty, but it’s the design of the film which stands out; the bat-like sleek beasts amongst the most beautifully animated dragons in screen history, making them the real stars of the film. You’ll believe a dinosaur can fly… 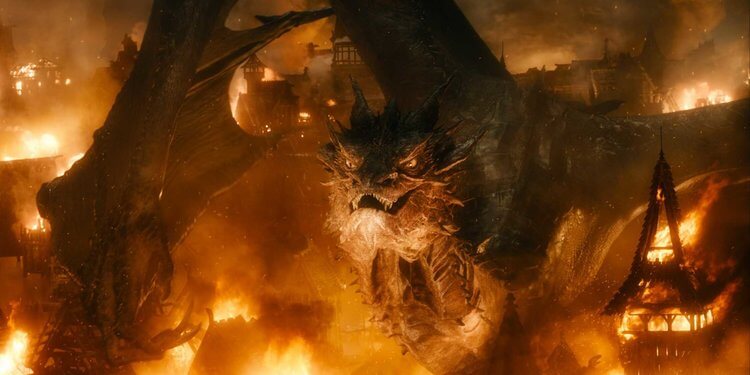 In 2014’s The Hobbit: The Battle of the Five Armies, this total badass of a dragon’s annihilation of Lake Town makes Drogon’s destruction of Kings Landing look like a kitten with a box of matches.

Peter Jackson’s superb realisation of one of literature’s most menacing of winged serpents comes to play in the previous film, however, The Desolation of Smaug, where this ‘most specially greedy, strong and wicked worm' becomes a major chapter – only seen in part in the first of the trilogy, An Unexpected Journey.

And what a dragon Smaug is! Stunningly rendered by Weta and beautifully performed and voiced by Benedict Cumberbatch.

As Smaug heads towards Lake Town with revenge on his mind he cries out, “I am fire. I am death.” No dragon before then had so convinced audiences of the truth of that…

At the end of Season 1 of Game of Thrones, when Daenerys Targaryen stepped from the flames as the Mother of Dragons, her three babies hatched from long dormant eggs, who knew that we’d grow to care about their fate as much as some of the human characters in the show?

Whilst the deaths of both Viserion and Rhaegal left fans screaming with horror at their TV sets, there’s no denying that it was always Drogon who was the leader of the pack, the one we cared about the most. So, not surprisingly, by the end of the final season, as Drogon carries its dead mother off in its giant talons having destroyed Kings Landing with fire, the last dragon left alive is as heartbreaking a creature as any ever put to screen.

Of all of this show’s incredible effects, few reach the astonishing heights of bringing Drogon to life. Whether a beast of majesty, soaring through the skies of Westeros, or a fire-breathing demon laying waste to armies and cities, Drogon might be the most perfectly realised dragon ever put on film.

Drogon’s destruction of the Gold Train is a breathtaking (20-minute!) moment in TV history, proving that the small screen is no barrier to cinematic experiences, making Drogon top of the list.