In anticipation of our favourite rag-tag team’s return, STARBURST sat down with Tomer Capone and Karen Fukuhara – aka Frenchie and Kimiko – to chat about their characters’ evolving relationship, sliding a musical number into the R-rated show, and what hardships season 3 might have in store for the two fan favourites.

We catch up with you both a year after the events of season 2. What have your characters been up to in that time?

Karen Fukuhara: This season starts off in a wonderful, lovely place for both the characters. Frenchie and Kimiko have gone dancing, he's introduced her to all the greatest restaurants in town, and all the musicals – and yeah, we start in a really happy place. Kimiko is really trying to figure herself out in terms of what it's like to be a normal woman in this world. That quickly takes a hard turn, but they started off in a really good, healthy, happy, tranquil place.

Tomer Capone: [Laughing] No, but it was a really refreshing way just to open up the season. Those two are basically constantly running, hiding, and getting themselves into trouble. So just for us as actors, coming back to those characters from an optimistic point of view was refreshing. Yeah, things go shit sideways very quick, but we did have a little gap. Coming back to that was a lot more refreshing than returning to the characters when they’re both so depressed.

And one of the most beautiful things in terms of kicking off this season is the fact that Frenchie and Kimiko can really communicate. I mean, the second season ended with Frenchie asking Kimiko to teach him how to sign. And now he’s learned, and it just takes the relationship to another level. 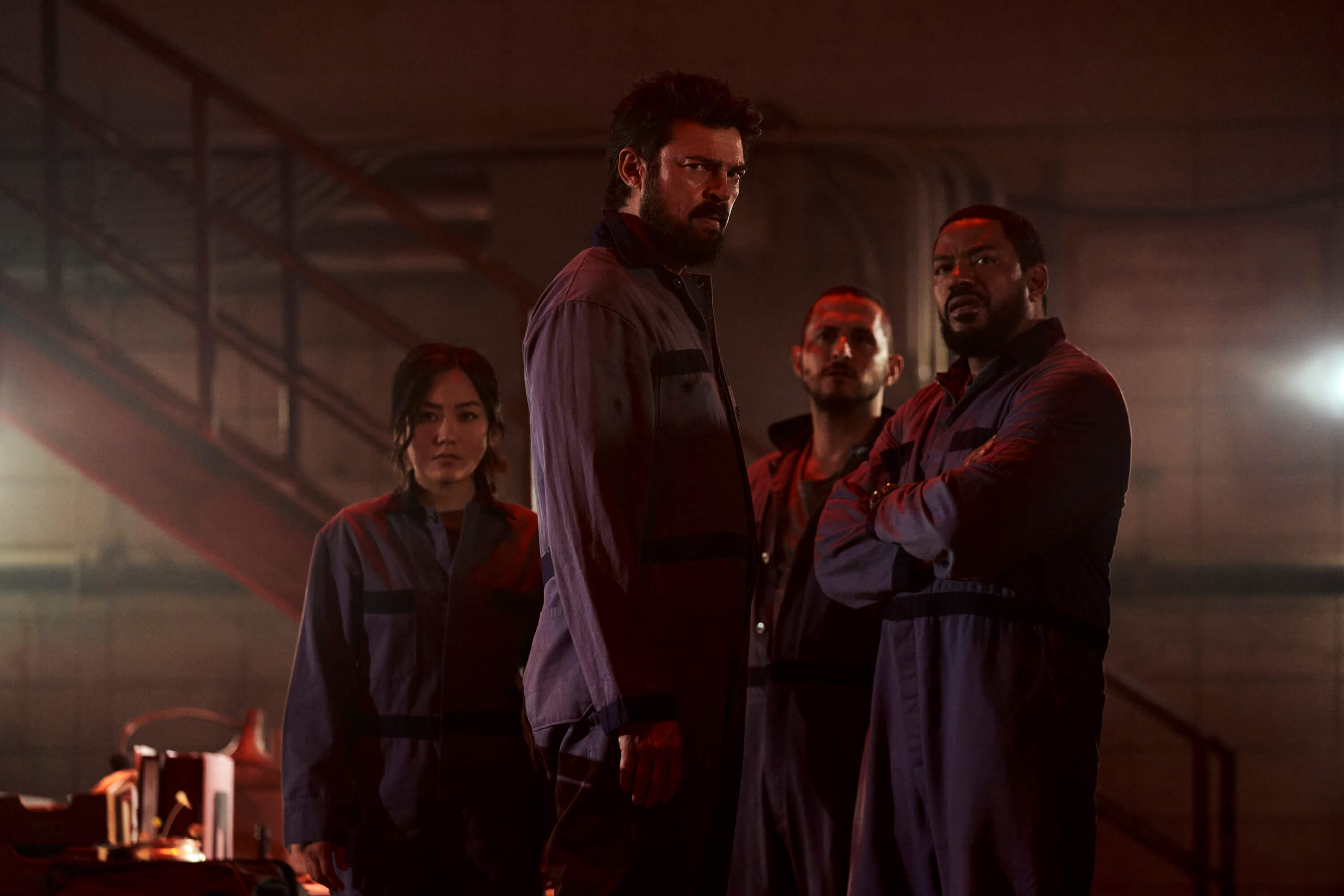 And how was it for you, Karen, to finally have access to this means of expression as an actress?

Karen Fukuhara: One thing that I really want people to know is that sign language, is a language. Although it's not verbal, it's a language that people speak on Earth, and it's just as powerful as any other language. And in terms of the show and Kimiko teaching Frenchie, that allows them to deepen their relationship.

And it's not just about learning a language and communicating on a superficial level; it’s more about her letting him in and being more comfortable with allowing others to touch her at her core. I think she's been very protective of that in the past, and the only person that could do that was Kenji. With him gone, she had to learn to be okay with having another human understand her.

With this season, what kind of character arcs can we look forward to for Kimiko and Frenchie? No spoilers, obviously.

Karen Fukuhara: It’s a roller coaster of emotion. When there’s a high, there’s definitely a low.

Tomer Capone: The answer is so elusive and so slippery. When I read this season, it was like every episode is opening a new Pandora’s Box. It really backs them into corners that they’ve never been in and puts their relationship to the test.

More than anything, I always saw Kimiko and Frenchie as the outsiders of The Boys family – you know, they’re both foreigners. Being French in an American world, being silent in a speaking world… and then this time around, after figuring out who they are themselves, now we're trying to figure out their place in The Boys family. And that's a very, very interesting, down-to-earth subjects to explore in a show that tackles so many big things.

And I love what Karen said about signing. It’s a language and it’s loud. I think that’s part of what makes Kimiko and Frenchie the heart of the show. It’s those little things that are actually the biggest things, and I wished we paid more attention to that. I’m very excited for those small bits getting into their relationship and their place in the world. And then, of course, there’s all the crazy shit that is going on, because it is The Boys. And yeah, man, we're going dancing! 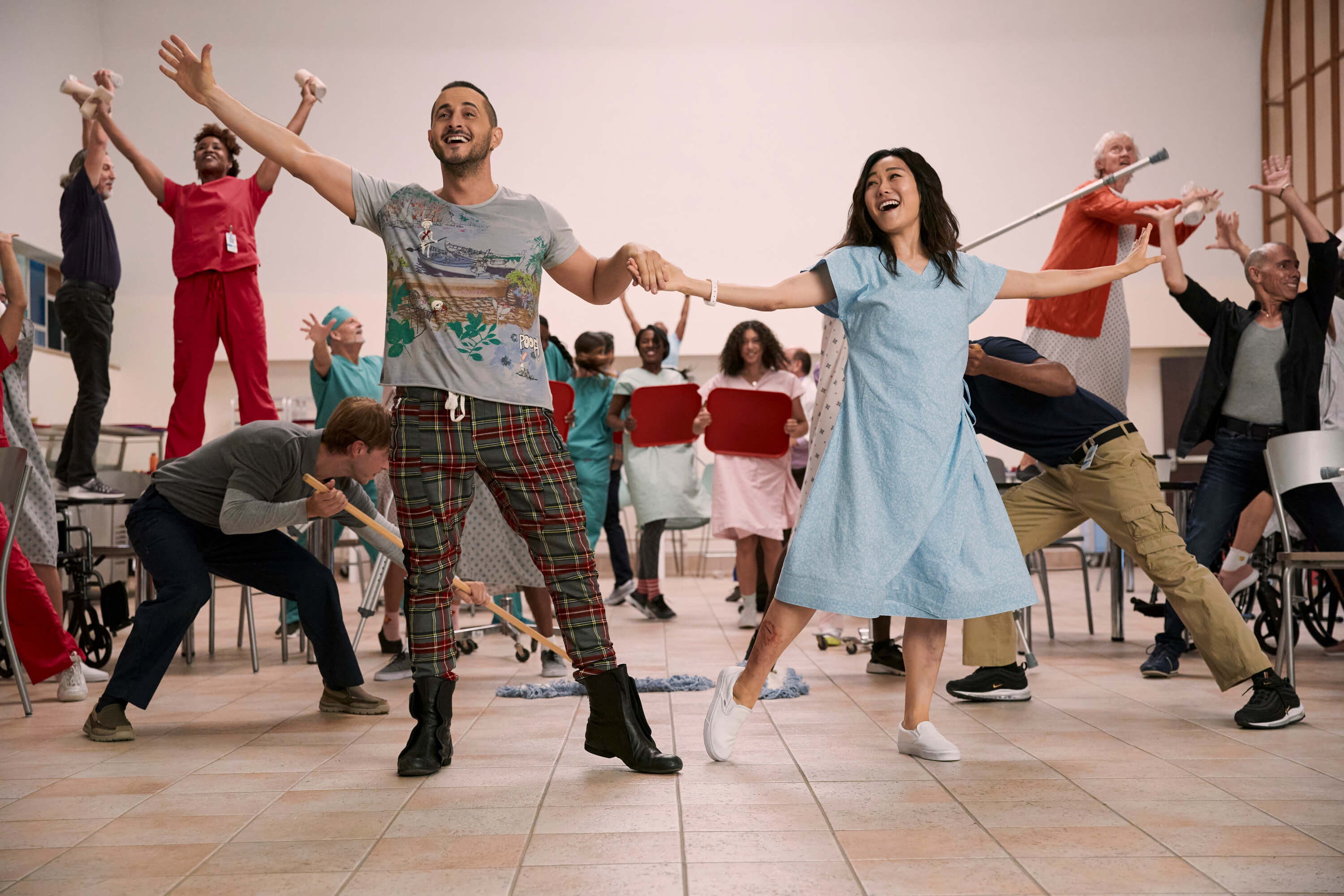 Everyone is very excited for the dancing! We only see the tiniest clip in the trailer, and already people can’t wait to see you in action. What was the preparation like for that whole sequence?

Karen Fukuhara: It was awesome. We worked with a wonderful dance coach named Amy [Wright] and she came up with all these crazy moves that were so difficult to learn and challenging, but so worth it in the end! I’ve got to give Tomer a lot of credit because – yes, the choreographer can come up with a number of fancy moves that are all wonderful, but it takes a lot for it to become your own and to put the character’s twist into the moves. You should’ve seen him as Frenchie dancing. There are so many little moments in there where you just think, “Oh, that’s such a Frenchie thing to do.” And he would come up with all these crazy, fun ideas. [Turning to Tomer] You did such an awesome job with the dance.

Tomer Capone: I know, thank you. [Laughs] Definitely the most fun part apart it was that we had this big number, and we got to put our characters into it. What I really loved about it, just in terms of how it goes into the show, is how it reflects everything going on within Kimiko. She’s such a defiant character in terms of physicality and in terms of her power, and the shift between the fighting Kimiko to this dancer is so beautiful.

And in terms of working on it, it was hard – very hard. And saying that, Karen would also have to learn her fighting sequences between learning her dance moves, which was crazy. But we really supported each other; it was day in, day out, and we really wanted to do something special with it. We danced everywhere, man! Between sets, at birthday parties, we were like, “We wanna show you our dance moves!”.

We watched a lot of oldies like Fred Astaire, and we’d take it to Amy and be like, we want to try that. It’s beautiful. And think about it, we’re in a show where practically every day we get covered in bloods and guts, and whatnot, and salty tears. And then you have this day with thirty dancers behind you, and there’s flowers, and music is playing… it was an experience. It was a cute one, and it was so much fun. 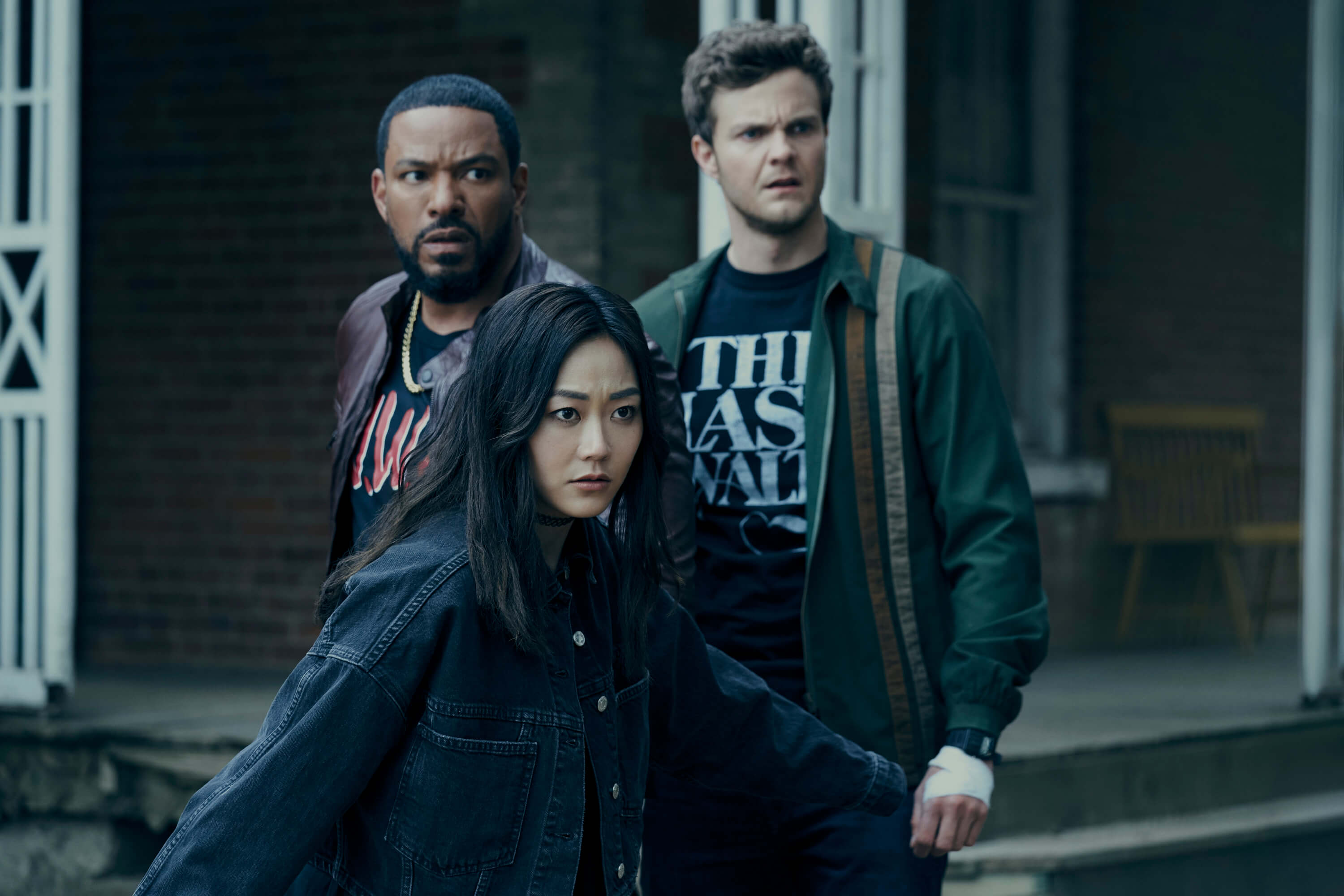 It's been a few years of knowing each other now – so from your characters’ perspective, what draws Frenchie and Kimiko together, and what do they love about each other?

Karen Fukuhara: I think for Kimiko, Frenchie is someone who never gives up on her. Even in the moments when she doesn’t feel confident in herself, he is. He supports her and is a dear friend to her. And I think that’s what bonds her to him, because he believes in her more than she believes in herself.

Tomer Capone: I think it’s this calming energy they have on each other, and it’s exactly like what Karen just said. I really like it when Frenchie always thinks he’s on top of things, and you think he knows what he’s talking about and knows what to do, and then Kimiko goes, “No, you don’t know jack shit”. And he’s like, “I don’t? Yeah, I don’t”. It’s a back-and-forth kind of thing.

And I love that Frenchie thinks he’s got so much to teach her. If you want to throw it to real life, I always saw myself as Karen’s mentor in terms of backgammon. I taught Karen how to play backgammon and she was my little grasshopper. And then I said, “It’s amazing. Look at this, I created a little backgammon monster!”.

But guess what? The backgammon monster is owning my ass. That’s just a perfect reflection of the Frenchie-Kimiko relationship.

Working off the assumption that you both make it to the end of the season – and I don’t want to hear otherwise – where would you guys like to see your characters go?

Karen Fukuhara: Honestly, I’d hate to answer this question because I feel like anything I come up with won’t be as good as the writers’. They do such a wonderful job and you just think, this is brilliant.

Tomer Capone: That’s true. They do such a good job, and they always surprise us. 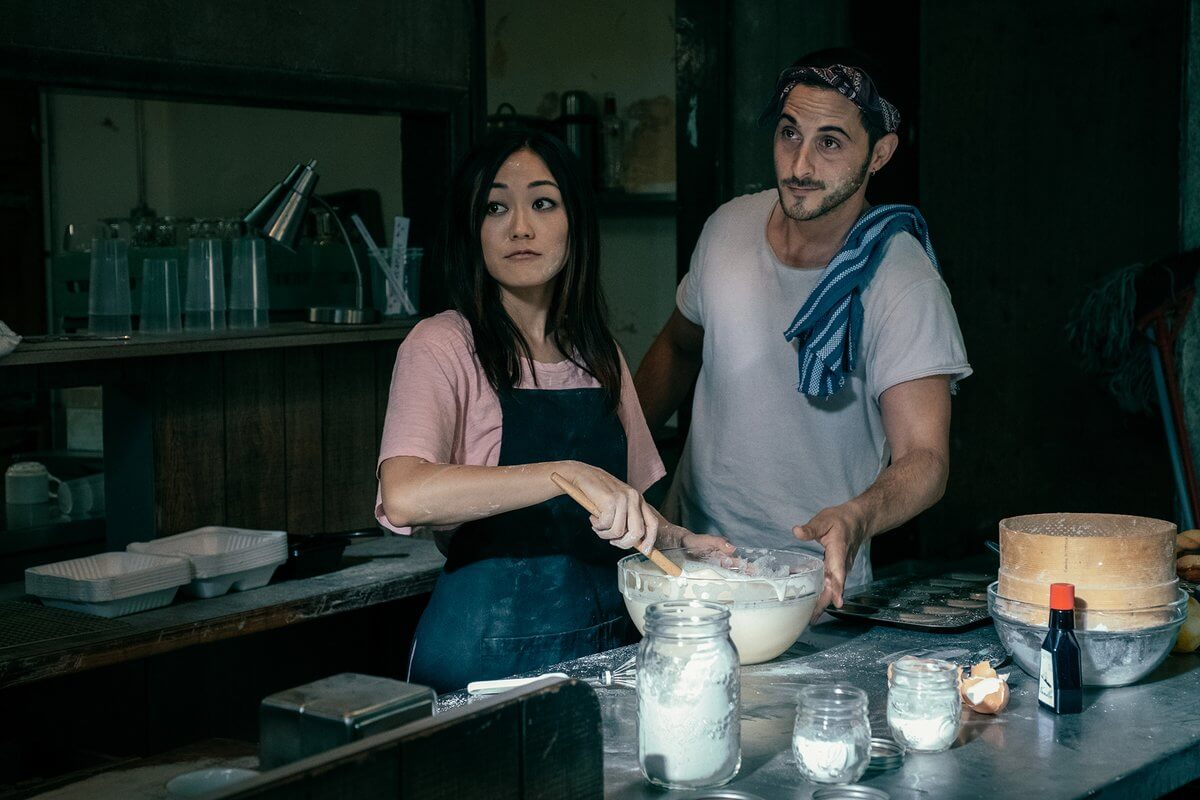 I can’t imagine how some of the scenes must read on the page.

Karen Fukuhara: I think what’s beautiful in the writing is, a lot of it sounds like someone is speaking to you – the scripts are written in a very conversational tone. I think in the script for the end of season 2, it said like, “See you next season, motherfucker!”. [Laughs] Or like there’ll be a scene with Hughie and it’ll say, “Hughie is covered in blood… again”.

Tomer Capone: It’s an interactive kind of reading, kind of like a comic book. It’s so good.

And finally, aside from the dance number, is there anything you’re particularly excited for people to see or that you found very challenging this season?

Tomer Capone: We do have a really hard scene towards the end. We always like to talk about the good stuff, so we talk about the dance – but we also had a day which was very hard for me emotionally. I can’t give away any spoilers, but me and Karen were looking to each other constantly, trying to hold on. We were in a weird place, and those characters are really going to go through it. In this specific scene, they really need each other but can’t reach each other.

Karen Fukuhara: It’s funny, isn’t it? I feel like on that day when both our characters are really going through their struggles, we really felt it. Even when the cameras were not rolling. There was something between us that felt so weird – that was the hardest day on set, for sure.

For everything you need to know about what to expect from this season, read here, and check out the full trailer here.