With works ranging from SIX-GUN GORILLA to STAR WARS: DOCTOR APHRA, writer SIMON SPURRIER has demonstrated a range that, even amongst his fellow heavy-hitters, is remarkable. Now, he's winding down from THE DREAMING, a 20-issue, SANDMAN UNIVERSE-set series he worked on with Brazilian artist BILQUIS EVELY. THE DREAMING is as gripping and mystery-filled as it is profound, a richly told, gorgeously drawn story brimming with the weird, the wonderful, and the wildly imaginative. We caught up with the duo to discuss their wildly successful time spent in Neil Gaiman’s sandbox…

STARBURST: How do you feel, now that the final issue of The Dreaming has hit shelves?

Bilquis Evely: It's hard to tell. It seems a sense of awe. I still can't believe I've been working on this project for two years! So many things happened, I matured a lot as a professional and as a storyteller. All the study, all the images and layouts, seems endless now and somehow a bit far from me. Maybe it feels like a dream? I hope all the readers enjoy our last chapter. I enjoyed every minute of it. And I couldn't be more thankful.

Something we’ve noticed about The Dreaming is how effectively it conveys the craziness and the confusion of the subconscious. How difficult was it to blend all of this fantastical, otherworldly stuff together in a way that felt seamless and comprehensible?

Simon Spurrier: Certainly not easy, but it comes with its own set of benefits. When your storytelling canvas is as wide and pluripotent as the shared human unconscious - which, after all, is what the Dreaming ultimately is - it pays to see the endless possibilities as a positive rather than a source of anxiety. You want to tell a tale about a self-help group for troubled monsters? Do it. Want to do a bottle-issue about a comatose girl’s mom grieving? Sure. Or an all-out demonic assault on a fairytale kingdom? Get involved. Like any story, at any scale, as long as you define the rules of the game and make a point of focusing on the human drama rather than getting lost in worldbuilding, you won’t go far wrong. It helps - no, that’s an understatement; it’s critical - that I shared this journey with Bilquis, among a few other exceptional artists. It’s one thing for me to mischievously mash genres and go racing off on flights of narrative fancy one simply couldn’t get away with in any other context, but it’s down to Bilquis’s unparalleled capacity to parse and humanise everything I threw at her that the book works so effortlessly well.

Bilquis, what was the most difficult part of putting this world onto the page? How did it challenge your process?

Bilquis Evely: The most difficult part of drawing The Dreaming were the big montages for the double-pages spread, undoubtedly. It was a different experience for me and took me a while to figure out the best process. Throughout the series, it got more comfortable, but it was always a fun challenge, like a puzzle.

It must have been daunting…

Bilquis Evely: I was very aware of my responsibility, but honestly, no, I wasn't too intimidated, even knowing the enormity of this universe. Mainly because, since the beginning, I knew the project would match with my art style. Also, I had a couple of months to study everything I could and to develop the line art for the series. So I started the series feeling very comfortable. I felt like I was at home. I didn't change my process, but as any other project, I changed the art style a little bit according to the atmosphere of the story. The lines are looser, dynamic and more organic than on previous projects, I guess.

Which characters are your favourites to draw? Who were you most excited to draw when you sat down to work on a new issue?

Bilquis Evely: I believe it's Lucien. He's an amazing and rich character with an emotional role on, therefore it gave me ample space to explore a range of emotions, which is something I love to do. Besides this, his design is perfect for my taste! Pointed ears and a bow tie. I'll miss him.

How closely did you stick to Simon's original script? Was his script super specific about what he wanted, or did he give you room and time to experiment and see what worked?

Bilquis Evely: There are specific descriptions of the script for crucial elements of the story, for example. Still, Si gives me a lovely space to create things, especially visual elements, and also to add my percentage on the storytelling as any good relationship between two creators. Simon has a brilliant imagination, and his visual ideas are incredible, always coming up with new great suggestions throughout the series and also pushing me to bring some innovation. The double-page spread was a bit different from the rest of the pages, with a long description mapping and explaining the whole concept. Then I started with the layouts, adding my visual ideas to make it work properly. But the principles were the same for every page, with a lot of addition from both sides. 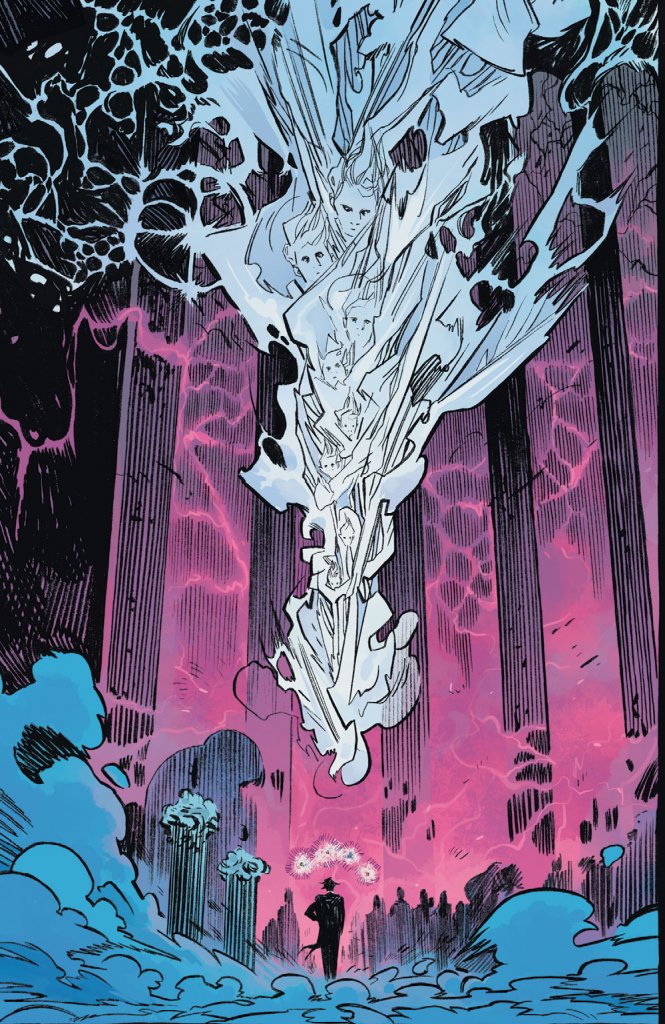 What would you say the thematic through-line of The Dreaming is?

Simon Spurrier: I mean, there are a lot of big chewy themes at work here - each different character has their own, frankly - but I guess, if I had to boil down the central trunk of the tree,  it’s a contemplation of the importance of mystery, irrationality and wonder, no matter how ridiculous, frightening or infuriating they may be.

When writing the last issue, what thoughts, feelings, fears, etc. ran through your head? Were you intimidated at all?

Simon Spurrier: Oh, hugely intimidated. By definition the world in which it takes place has infinite possibilities, so it really would have been very easy to just keep going forever. But… always leave ‘em wanting more, right? I could see a way to close the main arc I’d been telling which felt honest and powerful, and which ended on a real rock’n’roll magical high, so I took it. Actually, I don’t think I was ever most worried about managing to close-out the big long-running mystery, namely: what happened to Lord Dream, and is there any way to get him back? I was far more nervous about the more human-scale stories, especially for Dora and Lucien. I think in the event they both end the series in a profoundly different, and, for me, more emotionally rich place, than they started it, which I’m taking as a win. Dora, in particular, feels like a character whose journey, through trauma and self-hatred, feels like an important and optimistic road to walk. The only other thing which gave me pause during the project was how the Sandman fanbase would react to the more science-fictiony elements I folded-in. In particular the notion of an artificial sentience which, through no fault of its own, comes to rule the Dreaming in the absence of its proper master. I’ve been really touched by how well that thread has been received. It never ceases to delight me how far you can push the boundaries of fantasy and sci-fi into one another without coming unstuck. They are, ultimately, the same thing: creative contexts in which to tell human stories.

Given the scope of the project, did you have to think, organise, or write differently to produce the book?

Simon Spurrier: Not really. As I’ve said, it’s a matter of context. I tend to believe that as long as a story-world feels functional it doesn’t matter whether it’s a small town in the Bible Belt, a mineral-mine inside the eyeball of a gigantic fish, a super-positional matrix, or a fantastical kingdom that exists in the sleeping minds of humanity. As long as it has internal logic, the characters are what truly matter. Oddly enough, in plot and structural terms, my approach to the series was to mentally position it as a Western. Specifically, it’s the story of a frontier town whose sheriff has disappeared. Seen in that light it doesn’t really matter that the sheriff is in fact an omnipotent anthropomorphic personification who’s been deposed, or that the bad guy is a silicon valley billionaire with a pet A.I. in the shape of a giant moth, nor that the scared townsfolk are the hard-working creators of all human dreams. The story, and the way in which it unfolds, are the same either way… just with a few more demonic sexytimes and the occasional foul-mouthed pumpkin thrown in too. 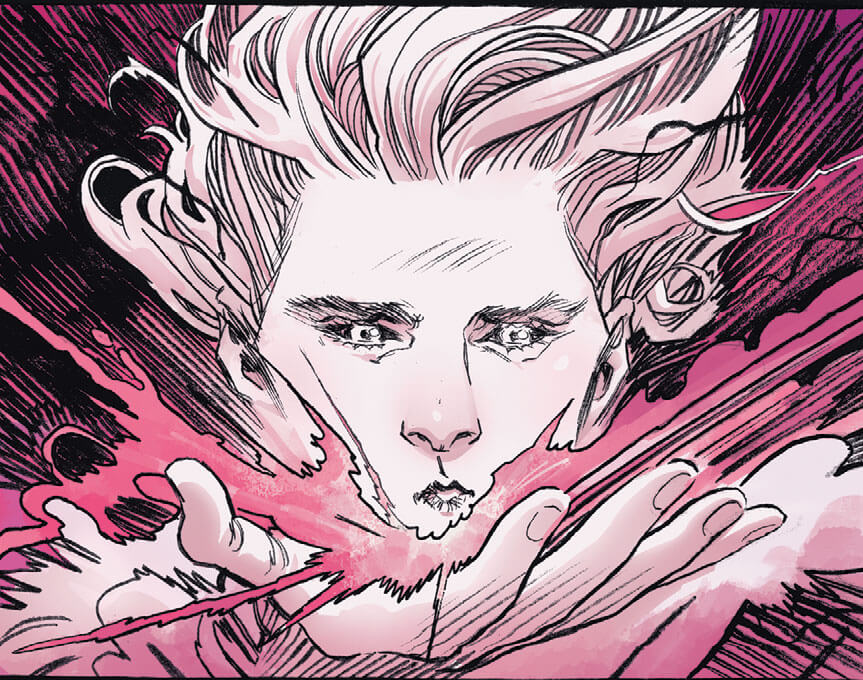 Do either of you plan on returning to the Sandman Universe?

Simon Spurrier: Abstractly speaking I’m already there. One of the reasons I chose to wrap-up my run on The Dreaming rather than spinning it out further - and risking overstaying my welcome! - was because DC, and Neil, thought me the right fellow for the job of bringing back John Constantine to a mature audience. Hence the new Hellblazer series. We’re calling it a Sandman Universe title only in as much as it utilises a few hanging threads from Neil’s past oeuvre in order to get John back on his feet to where we need him, but old-school Vertigo Hellblazer fans will immediately recognise their guy. It’s been an absolute joy to bring one of my favourite characters back to his roots: as a surly, swindling, foul-mouthed magician who rarely relies on anything as tawdry as magic - preferring to outsmart opponents - who’s tormented by his many mistakes. The Constantine we present in Hellblazer is that most compelling of archetypes: a bastard with a conscience. We’re taking that story into some very dark - and very surprising - places.

Anything you can tell us about that or any of your other future projects?

I’d urge everyone to check out Alienated from Boom! In essence, it’s a story that asks “what if E.T. had been found not by a well-intentioned kid but three angry teenagers?” Oh, and “what if E.T. turned out to be an extremely hungry super-predator?”

All individual issues of THE DREAMING are available through your favourite digital comics platform, with the final trade paperback collection coming July 14th.