Most ‘normal’ folk know him as that nice Paddy off of Emmerdale on the telly, but to us, Dominic Brunt is a director of fantastic films - quite literally. His debut Before Dawn was a relationship drama set among a zombie apocalypse, and his follow-up, Bait, was a gore-filled, hard-hitting story of desperation when faced with debt collectors. However, his latest cinematic outing - hitting the Horror Channel in January - is an outrageously grotesque slice of surreal horror. Imagine if John Waters directed an episode of The Outer Limits that was written by Roald Dahl’s more sadistic twin. It probably still couldn’t prepare you for what you’ll be faced with. Surprisingly, though, it was Brunt’s wife, Joanne Mitchell, who came up with the story.

While Brunt’s previous films have had a grounded social conscience among the horror, Attack of the Adult Babies takes a less cerebral approach to ethics, politics, and the world order. Taking a leaf out of Alex Chandon’s book (the pair have worked together several times, and Dominic was a memorable cast member in Chandon’s superb Inbred), there are plenty of outrageous visuals, and sickening situations as the story unravels before our disbelieving eyes.

We spoke to Dominic and Joanne as the film was due to be released in 2017, and they told us that although Joanne wrote the story, they trusted Paul Shrimpton with the script, largely due to his work on the aforementioned Inbred. “I really like Paul’s way of working, and I know he can deal with that side of things,” Dominic explained, “Jo broke it down scene-by-scene and then we passed it to Paul. He stuck rigidly to the storyline; he changed some of the ending and the dialogue, he put a few jokes in, and he brought a fantastic pace to it and a shape that was far better than it had been.”

It was a step-up for the pair filmmaking-wise, as Brunt told us: “There was a lot of pre-production because there’s a large cast in this one. It’s set in a massive manor house, and we found one about called Broughton Hall [in Skipton], so we managed to live there and eat there, and we could get up in the morning and start filming and stop when we dropped.” The convenience of shooting and staying in the same place made the production much easier than the previous film, “Bait was twenty-six locations - it was a nightmare dragging these massive lorries and seventy-three crew around,” he continued. All this with only a three-week shooting schedule!

The film begins rather sedately, albeit interspersed with a grotesque nappy-wearing man being pursued by a sexy young nurse, while others get into their uniforms. We’re introduced to a nice family playing a board game. George and Sandra (Andrew Dunn, best known for TV’s Dinnerladies and Kate Coogan) seem to be attempting to coax Sandra’s son Tim (Kurtis Lowe) to get into the spirit of it, while Tim’s daughter Kim (Mica Proctor) is more concerned that her would-be stepbrother has been having a dirty rummage with her underwear. Suddenly, a pair of Eastern European thugs burst in and demand the group hit the deck. Despite being absolutely inept, they tell Sandra and the two kids to go to retrieve some documents from a nearby mansion, or George will ‘get it’. Although they’re terrified, they set off, leaving George in their home. Except it turns out, it’s all his planning, and the pair are even more incompetent than one could possibly imagine.

Meanwhile, at the mansion, a strange gathering is taking place. A group of ageing, overweight gentlemen are assembled for a weekend refuge. They are not getting pampered, though. Well, not in the normal spa way. Clad only in towelling nappies, they are given oversized milk bottles and begin guzzling at the teats. The nurses, all attractive, stocking-clad young girls are given strict instructions from the dominatrix-like Margaret (Sally Dexter) and her sidekick Clinton (Joanne Mitchell). The collection of men includes bankers, ministers, and other dignitaries and are played by the best of the grotesque. Brunt has worked with some of the men before; Seamus O’Neill is another Inbred veteran along for the ride while wild-haired comedian Charlie Chuck (Woof! Bark! Donkey!) appeared in the director’s Bait, but new to the team is Laurence R. Harvey, versatile star of The Human Centipede sequels amongst other cult offerings. They may look unusual to start off with, but once they commence feeding on the milk, am even more outlandish physical change begins. They grow porcine-type snouts and, worst still, start to soil their nappies.

This is the reason they are there: their excrement feeds the machine that perpetuates their wealth. Literally. Only, rather than a nuts-and-bolts thing, it’s an ancient alien that lives deep underneath the house. It’s an interesting concept (and beautifully farfetched) and is just crazy enough to make the rest of the film appear normal.

What follows is a gloriously wild ride in which the family attempt to escape not only the marauding head nurse and her chainsaw-wielding colleague but the riled adult babies who are upset that their Masonic-type ritual has been interrupted.

By the time the movie reaches its climax, there’s enough gore to please any horror hound and more shite than Pasolini’s Salò, or the 120 Days of Sodom and The Human Centipede 2: Full Sequence put together. If you can stomach that, you’re in for a treat. We’re also treated to several different styles of filmmaking: a vintage cartoon sequence, for example, illustrates the pig’s greed, Alex Chandon weaves his visual magic for a psychedelic trip into the creature’s mind, and a brilliantly over the top sequence animated by Claymation master Lee Hardcastle comes out of nowhere.

In today’s political climate, the gap between the ‘haves’ and ‘have-nots’ has increased exponentially. It actually makes the powerful, well-to-do occupants of the retreat rather believable. Some of the most influential figures in the world act like man-babies a lot of the time (there are a few, like a certain president, who seem to behave no other way), so it makes sense that they’d want some place where this can be indulged to the most grotesque degree. However, this is not a perverse fetish. They are there for a reason, and that reason perpetuates their wealth.

Dominic elaborated on what he wanted to do with the film: “I wanted to tell a wider story about the banking system and the people in charge and the corrupt politicians and MPs and people in authority who seemingly have the power to tell us and everybody else what to do,” he told us, “whereas they’re actually human beings, too and more often or not they are where the stories are.” The situation is so ridiculous that there had to element of humour in there, though, “It’s all to do with poking fun at that, not being too serious, trying to make a political point but putting it across satirically because nobody wants to listen to a political point any more, certainly not over an hour and a half in a film.” And although there’s a serious point behind it all and some wry comedy, it’s not played wholly for laughs. “It’s not a Shaun of the Dead-type thing,” Brunt said, “there’s humour in there, but it’s not presented as humour. Everyone plays it absolutely straight. In tone, it’s a bit like The Lobster, where everything’s very strange, and the funny things are ignored; it’s not played for laughs at all.”

Brunt peppers the film with horror film references and tropes - some obvious (quotes from Night of the Living Dead and a line lifted straight from anarchic eighties show The Young Ones) and some surprisingly subtle - but it’s the screenplay’s unique take on modern living that raises the biggest smiles. Some very low brow but on-the-pig-nose humour comes from the hideously deformed wheelchair-bound elder (whose name is bleeped out in a high-level Pythonesque show of surrealism), who’s meant to be keeping an eye on the security of the place but ends up watching call girl-type shows (you know, the ones that are on the lower reaches of the Sky channels) on his laptop. His desk is covered in tissues (he… err… must have had a cold…) and at one point he’s seen putting the phone down just as the girl on screen breaks down uncontrollably. We’d have loved to overhear that conversation! While we’re on that seedy subject, there’s an intermission midway through (a nod to Monty Python and the Holy Grail, perhaps?) in which we see two very bored-looking models awaiting their calls, shaking their mobiles eagerly at the camera. Superb attention to detail there, Mr Brunt!

Fans of Dominic’s TV acting career will be pleased to know that, despite the big man not appearing in front of the camera this time (we do hear him doing a rather fine Alan Bennett voice, though), several of his Emmerdale alumni make appearances, but they are not token cameos, they also prove their acting chops (as well as showing how game they are). Nicky Evans (Shane Maguire in Shameless) also returns to work with the director (he played a key role in Before Dawn) as one of the utterly clueless Russian thugs in the opening who ends up with more than just a headache. Fans of Cannibal Apocalypse and the 2003 version of The Texas Chainsaw Massacre will enjoy his demise.

We’ll leave the last word on why you should see the film to the director himself: “The image of an adult baby is great; big fat men running around dressed in nappies chased by sexy nurses in suspenders. That would carry me through an hour-and-a-half of any movie, to be honest with you!” If that doesn’t convince you to watch, nothing will. 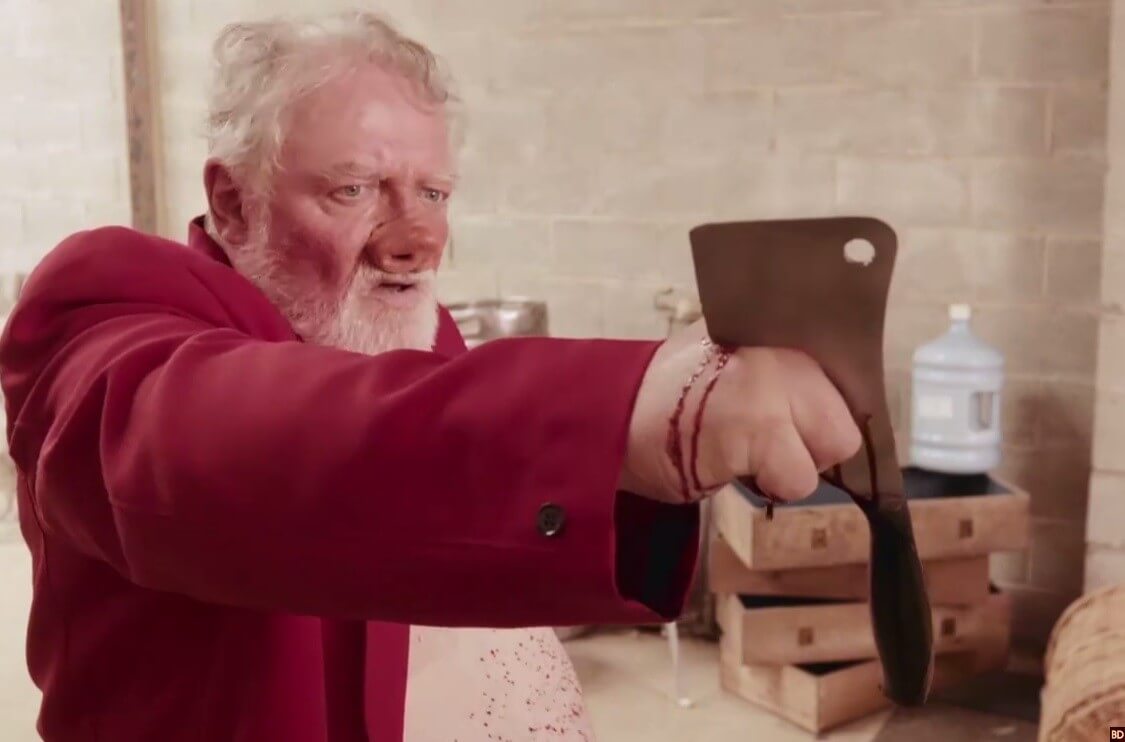