What lies beyond the black rainbow? To answer that, you need to experience MANDY, the long-awaited new movie from visionary writer/director PANOS COSMATOS. Get ready for love, rage and Nicolas Cage…

Eight years on from his acclaimed debut feature Beyond the Black Rainbow, writer and director Panos Cosmatos returns to the 1980s video rental store of his fervent imagination with a follow-up that is bigger, bolder and equally defiant of categorisation. It’s the story of Red Miller (Nicolas Cage), an introverted lumberjack living the peaceful country life with his girlfriend Mandy (Andrea Riseborough). Their idyll is cut savagely short by the arrival of a cult group led by the lizardly Jeremiah Sand (Linus Roache), a man with friends in multi-dimensional places. From here on in, Mandy is nothing short of an audio-visual assault on the senses - a mind-bending tale of revenge and redemption across landscape of dark fantasy, intense action and full-blown horror. We got the low-down on the film from the Italian-Canadian auteur…

STARBURST: It’s interesting that you’ve chosen a particular era - specifically 1983 - for both of your films, Beyond the Black Rainbow and now Mandy. What were you up to that year we wonder?

Panos Cosmatos: In 1983, I was sitting on the carpet watching Masters of the Universe or just playing in front of the television. For me, 1983 is almost like a blank canvass where anything was possible. It’s sort of a signifier for the mythical realm of all those imaginary films that you haven’t been allowed to see.

How did the concept for Mandy come about?

Well, originally, after my father (prolific action director George Pan Cosmatos) died, I ended up watching all of the Death Wish films in one sitting. And when you watch all or a series of films in a row, it gives you a lot of time and creates a sense of meditation almost where you’re floating through and around what you’re seeing and you reflect on what it is, what makes it work, what’s interesting about it. I started to draw up this idea of making a revenge film that revolved as much around the avenger as it did around the person being avenged, and their essence and presence that had been lost in his life. Not in a religious way, but how their memory would inform the psychic landscape of the avenger and have it be almost like a concept album or a song about that person.

Mandy initially feels like it’s in the same unviverse as Beyond the Black Rainbow, but it develops onto on much bigger emotional canvas…

I started writing it the same time as I was working on Beyond the Black Rainbow and, in retrospect, I realise that I was sort of channelling two different things. Looking back, Black Rainbow was kind of about supressing my grief and my feelings about the loss of my parents and dealing with that. I think I started to write Mandy almost as an antidote to give myself a more cathartic, outward manifestation for these feelings. 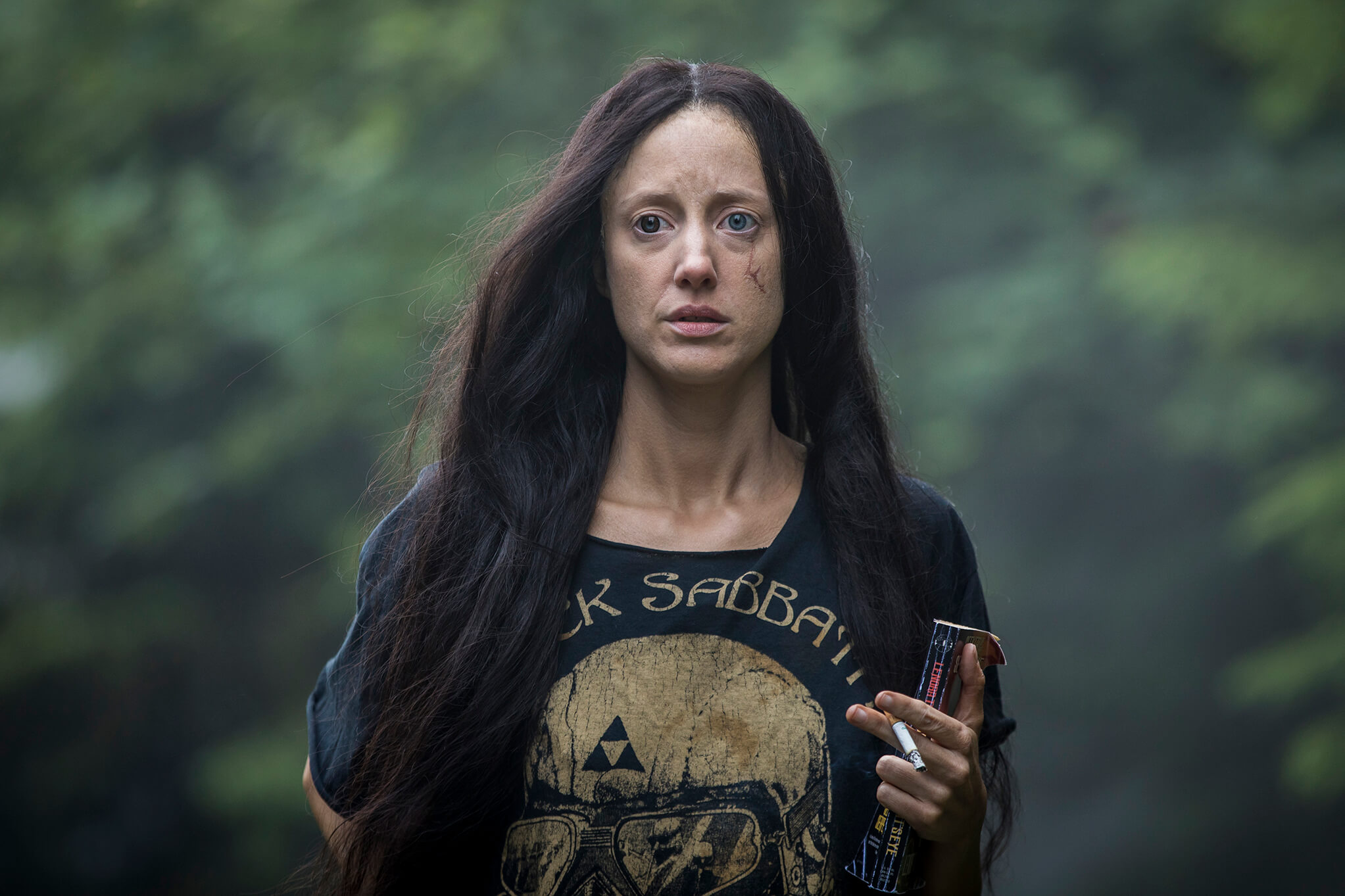 Nicolas Cage gives an astonishing performance as Red Miller, your avenger. How did you find working with him?

He’s an extremely methodical, thoughtful actor and he’s hyper-aware of what he’s doing in each scene and how to modulate that. He felt like a friend to me, like someone who really understood where I was coming from creatively. He was able to manifest these ideas I had in my head in an incredible way. It was joyful to work with him.

One of the most striking things about Cage’s performance is how exposed and raw it is - we’re talking Nic Roeg territory. At times you almost want to look away from screen, but you can’t…

Yeah, I wanted to explore the outer realms of what Cage can bring as a performer because he has the ability to go into almost Dada-esque regions while at the same time being the most fragile human being.

Is it true you first had Cage in mind to play Jeremiah Sand, the villain?

Originally, I was leaning towards casting Red quite a bit younger and casting Jeremiah quite old. Not that Nicolas Cage is very old, but I knew he could play quite a bit older or he could play younger and he feels to me like he looks ten years younger in this film. But I was very in love with this idea of him playing Sand opposite and actor in his late-20s or early-30s. Over the course of trying to get this film made, this was the theme that was intriguing to me. So when I went to meet him, I thought we were going to talk about him playing Sand, and he said “I really want play Red Miller”. From my perspective it was like, well, whatever, forget it… it was nice to talk to him. A few weeks later, I had a dream where I was watching Mandy and it starred Nicolas Cage and it was undeniable how amazing it was, or how amazing he was in the part in my dream! So, I woke up and it was like, the gods have spoken and told me that I was wrong. My id had refuted my thesis! [laughs] 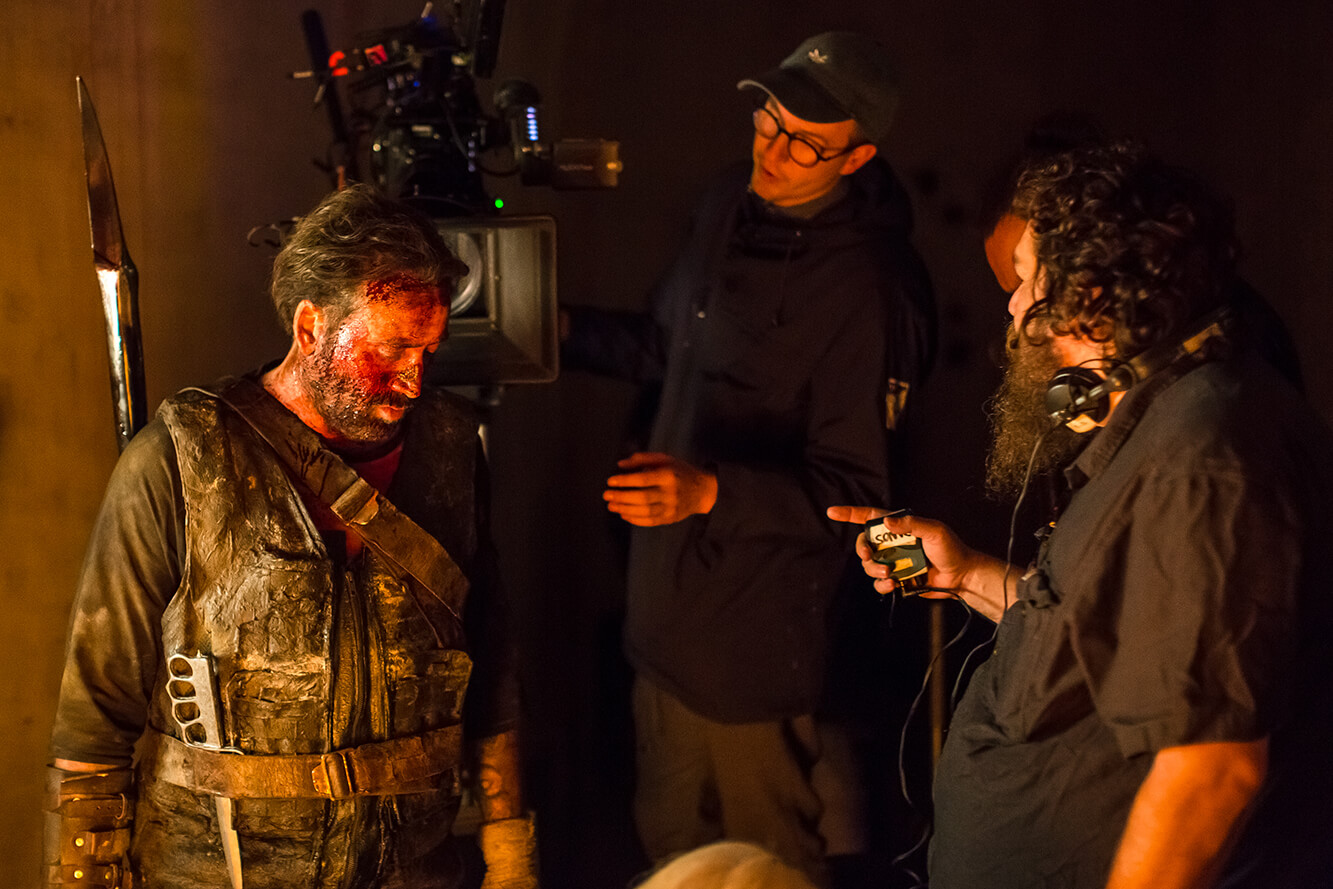 Having switched Cage to the hero role, you then cast Linus Roache as the villain, Jeremiah Sand, who is a wannabe shaman, cult-leader, and frustrated pop star. Basically, the kind of guy you meet at a party and try to stay the hell away from - but on a demonic scale of assholedom. Is he someone you’ve previously encountered perhaps?

I’ve met someone like him many, many times [laughs]. Especially on the west coast of North America, the landscape is teeming with Jeremiah Sands. I’ve been exposed to people like him my whole life so it was really a matter of drawing on all that.

Andrea Riseborough is mesmeric as the title character Mandy Bloom, Red Miller’s free-spirited girlfriend and the object of Sand’s desire. How did you pitch the character to her?

She was my first choice to play the part, I just thought she was this amazing chameleon. But again, I felt insecure and thought she wouldn’t want to play the role. From afar, I viewed her as this sort of very Shakespearean actor or something. It turned out that she had seen Black Rainbow and was looking to work with me. I basically told her two stories from my childhood about women I had encountered when I was nine years old. One of them was at a carnival that would come to our town. She was a woman in a booth who would sell Velcro wallets. She had long black hair and wore wire-rim glasses and a Judas Priest T-shirt. In the process of buying this wallet, in a very juvenile way, I just kind of fell in love with her.

The other woman I encountered in my teenage years where my friends and I were cruising some place or other. They wanted to buy weed and we went to a strange apartment complex. We went into this woman’s place and she was freebasing cocaine and drawing these incredible images of unicorns and barbarians and dragons in amazing detail - she’d covered her walls with them. And again, she had long black hair and wire rim glasses and was wearing a heavy metal t-shirt. So when I was writing Mandy, those two people were at the back of mind all the time. 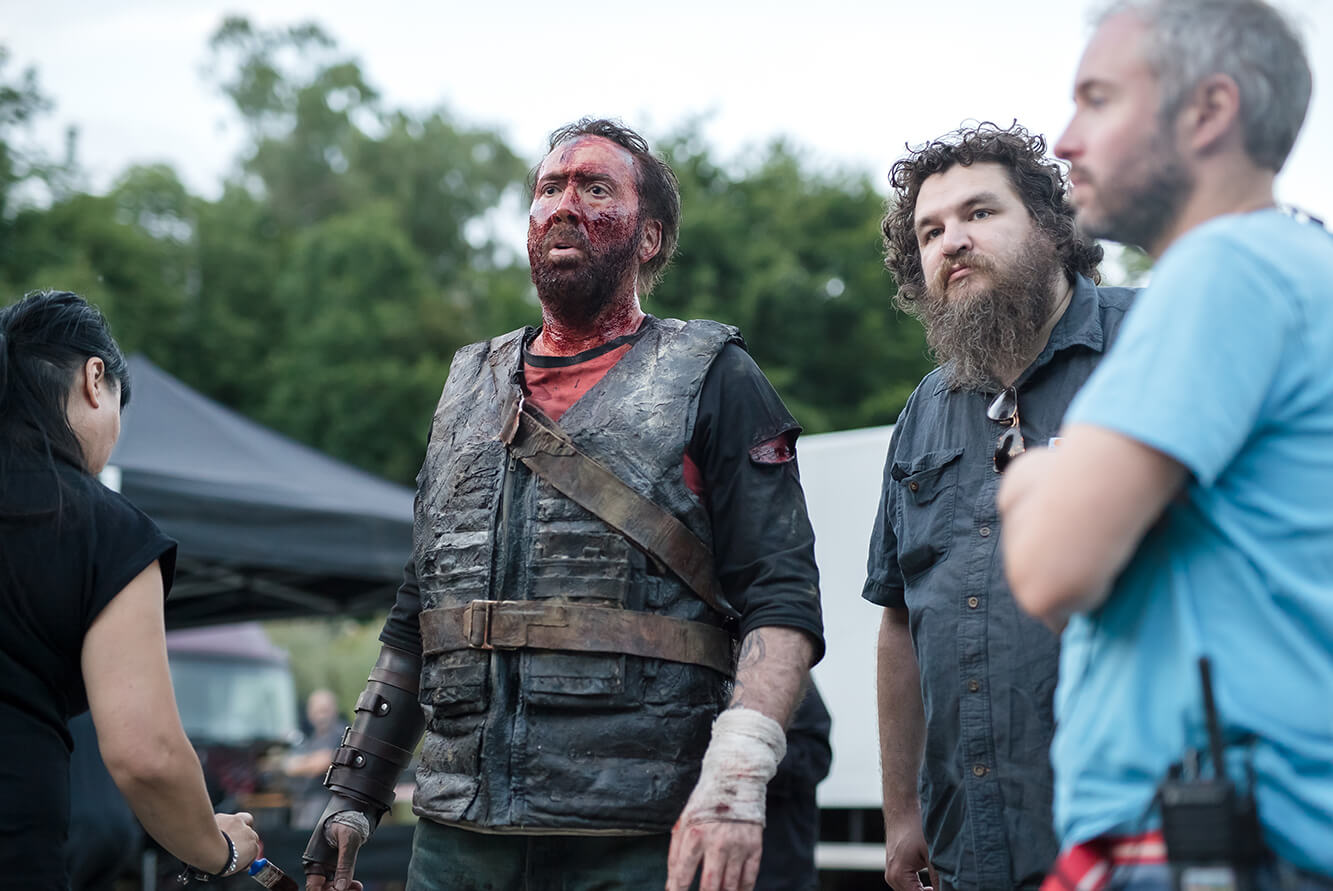 The visuals on Mandy are more fantastical and stylised than your last film. Was this always the intention?

I just wanted to follow my instincts; on Black Rainbow, I was a lot more rigorous about finding reference points for colour palettes and tones and then sticking to them. On this film, we experimented on the fly. I felt more comfortable doing that having had the experience of making Black Rainbow. But it’s is a pace thing, it’s about having your goal and sticking to it whatever the circumstances may be.

On that subject of pace, the second half of Mandy is like a rollercoaster of action and horror sequences. Did you lose much of what you shot in the final edit?

Our schedule and budget on this were extremely tight so there wasn’t really a lot of room for shooting extraneous stuff, but there were two sequences that were quite lengthy that we shot in their entirety that were excised because they just felt like they were slowing the film down. I wish, in retrospect, that I’d just cut those out at the script stage, but it’s kind of hard to know for sure whether something will be integral or not. But given how tight our schedule was, we really could have used that extra day and a half!

The animation sequences in Mandy add an unexpected dimension to the story. What kind of effect on the audience were you aiming for?

I wanted the animation to bring to mind a feeling in the film that was almost joyful in that way animation can be, because it’s a more outward expulsion of these feelings in the story that it can manifest and link together, of these various different talons and forms.

You also rather wonderfully mess with our expectations about how and where a movie’s title should appear!

Yeah, I became kind of obsessed with this idea of pushing the title card as deep into the film as I possibly could! 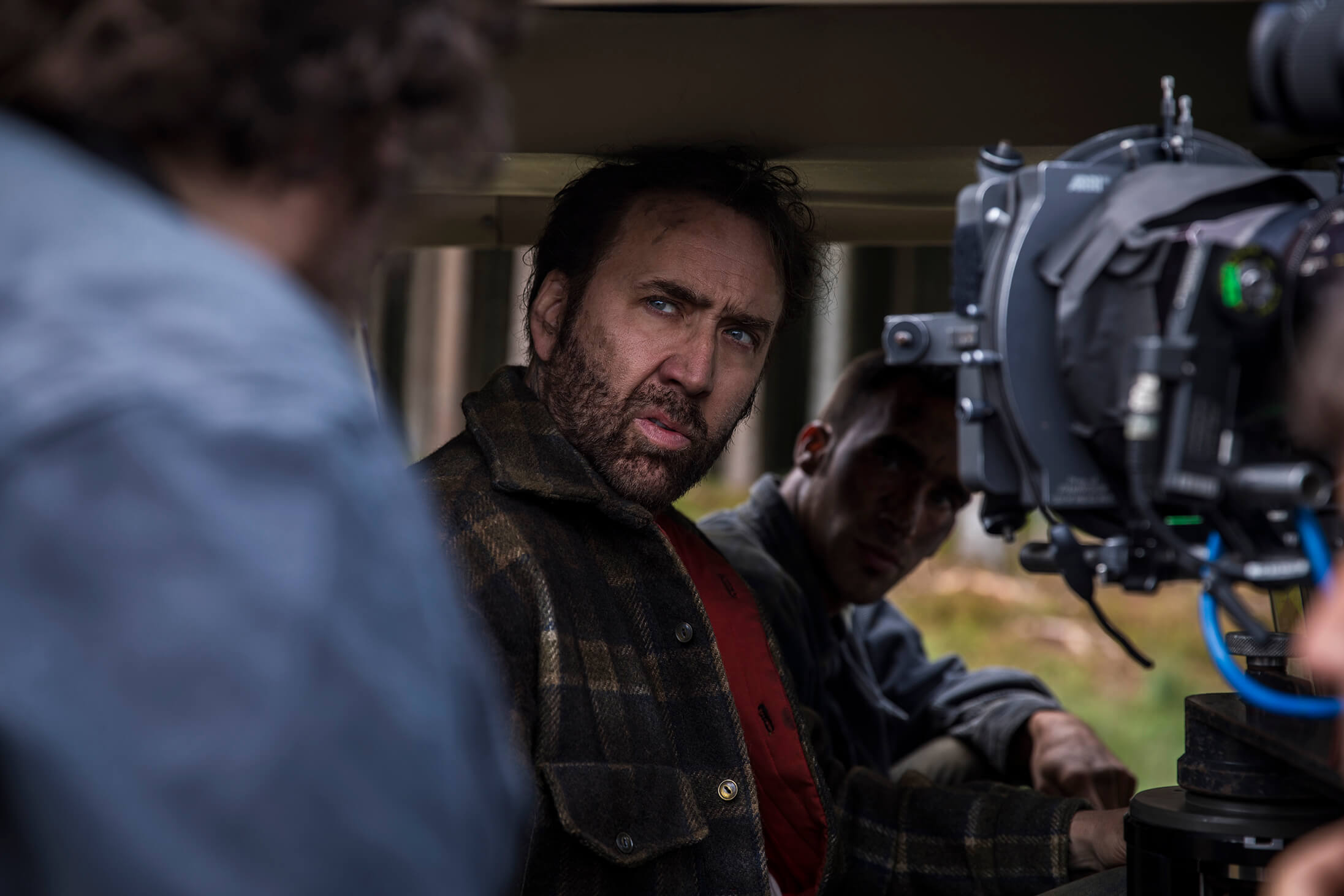 You may have broken the record. It looks like you went mostly practical for the effects, which is a joy to see in this age of over-egged CGI. One that really stands out involves a body burning alive in a sleeping bag. It’s scarily real - how was it achieved?

Yeah, it’s mostly practical effects, absolutely. That effect essentially was an armature with cables attached to it inside of a sleeping bag that was puppeted.

The late Jóhann Jóhannsson provides a cacophonous musical score that is an essential part of Mandy. How was your collaboration with him?

I really think he was kind of a kindred spirit in a way. I didn’t even think of him to score it because I admired him from afar but thought he was out of my league, or he would have no interest in something like Mandy. But, again, it turned out he was Black Rainbow fan and came to us and asked about my next thing. Then talking to him, I realised he was an Icelandic metal-head as well being this incredibly nuanced, brilliant composer. Over the course of working with him, I really felt like I’d found this connection. I was really looking forward to working with again many times.

What’s next for you, or is it too early to say?

I can’t say for sure yet, it’s sort of brewing in the background and I’m waiting to see which idea will grab a hold of me say it doesn’t want to be ignored!

Mandy is out now on limted edition Blu-ray from Dazzler Media. Read our review of the film here.