STARBURST: What attracted you to the project?

Nick Frost: The chance to make a film that my kids can see. I don’t think there’s anything I’ve made up until this point that my kids are allowed to watch! I have a seven-year-old who’s constantly badgering me to watch things that usually involve beheadings, or someone being eaten, or swearing, or “daddy, why are you in bed with another lady that isn’t mummy?”, so it was a nice opportunity to do something that I could be proud of my children watching!

You voice StarDog in the movie, how do you prepare for this kind of role?

I come in with an idea of what I think the character is and meet with the creatives on the other side and between us, we find a voice that suits the character and is true and honest and easy to reproduce. It’s fine to do a crazy voice but you run the risk of tearing your throat to pieces and never being able to work again.

What was your biggest challenge with this role?

I’ve never done an American accent before. I’ve been reticent and afraid of doing an American accent because people just judge you on the accent rather than the performance but I thought ‘well why not’? So I just had a go. I think time will judge me… and Americans, but I enjoyed doing it.

He’s a tryer who works hard and is very enthusiastic about life. He’s a good egg who’s been hurt and wants to try and find out the truth about a man he loves and I can really relate to that. 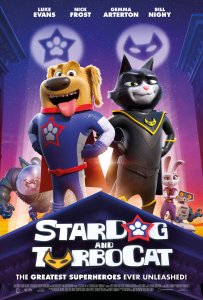 There’s one by Image Comics about a boy called Invincible that I really love. It’s about a 14-year-old boy who suddenly realises his father is a god and his mother was human. He’s a kid at school and suddenly starts to get these amazing powers. Out of all the superheroes, that’s the one I’ve read front-to-back and loved forever.

If you could have a superpower what would it be?

Flying is fine but imagine you could re-arrange items down to a molecular level. To just be a god would be it.

Are you a cat person or a dog person?

I have had dogs and as much as I love dogs, I’m a cat man. I have a cat called Eric. He’s the bane of my life and one of the loves of my life. He’s the boss of the house and he’s very naughty.

If you could be an animal what would it be?

I’d have to say a domestic cat. I think they have lovely lives if they have nice owners. Or something in the Fjords like an Osprey or something.’

How do you think the movie will be received?

I think people will really like the film. The world’s in a kind of mucky place right now so to get a film which is so full of light and hope and comedy and friendship is the thing we need right now.

STARDOG AND TURBOCAT opens in UK cinemas on December 6th