Genre mashup ANNA AND THE APOCALYPSE gained its reputation on the film festival circuit. Since its release, it’s become a firm cult favourite. As it makes its UK TV debut on Horror Channel on Christmas Day, we revisit our chat with director John McPhail…

STARBURST: The concept of a zombie horror comedy Christmas musical is a wonderfully crazy one. How did it come about?

John McPhail: It was originally the brainchild of Ryan McHenry, who wrote and directed a short film called Zombie Musical. He was watching High School Musical and thought ‘the only thing that would make this better was if Zac Efron got eaten by zombies,’ and it evolved from there. The short went on to win a BAFTA and had a feature commissioned by Black Camel. Then Alan McDonald came on board as a writer. Unfortunately, Ryan passed away a few years later. [McHenry died in 2015 of osteosarcoma at the age of 27].

How did you become involved in the production?

Producers Nicholas Crum and Naysun Alae-Carew were at the Glasgow Film Festival looking for a director for Anna and the Apocalypse. They spoke to horror filmmakers and musical people but weren’t finding the right balance. My first feature - the romantic comedy coming of age film Where Do We Go From Here? - was playing at the festival and after seeing it and loving the character and heart in it, they decided that was what they wanted.

How much of the completed film is Ryan’s own vision?

I believe that every director’s a different storyteller. We speak differently, and our brains work differently. I’m a very visual director, for example. I couldn’t say if he’d have made it the way I did, but I think it’s definitely my stamp on it. This is the style I went with, and it’s my cast, my team, and my jokes in there. The musical boys, Roddy Hart and Tommy Reilly - that’s their songs. As well as that, there are things that Ryan loved all strewn through it. There are so much of so many people involved all over it. 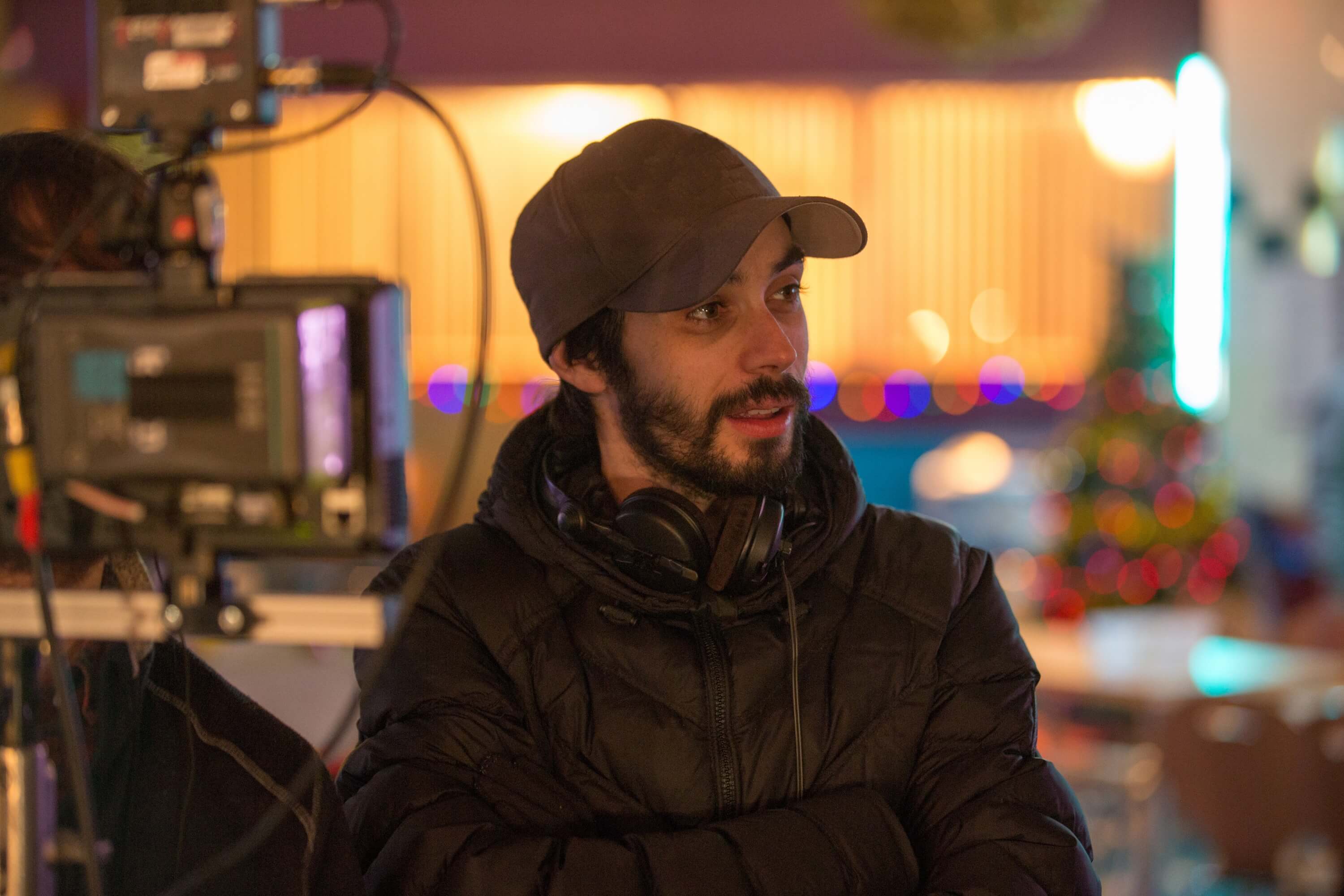 Director John McPhail on the set of Anna and the Apocalypse.

About those songs, how did you decide where they would fit into the story?

There were blank spots in the script for specific moments where the songs were going to happen. When I arrived, there were maybe five songs in different stages, with some further along than others. We never just wanted to break into song because there hadn’t been one in 15 minutes, it always had to serve the purpose of the story and push the characters forward. My two composers are just amazing, wonderful musicians, and I think they’ve done a fantastic job.

When you were first casting the film, how did it all come together?

When I started, there were over 150 casting tapes, and after looking at them all with the producers, we decided there were about 20 kids we wanted to see. We went down to London and pretty much found them all there at that one casting session. There were only two who weren’t on the sheets that I had brought to the table. First was Marli Siu, who plays Lisa, who I really wanted to see after I’d seen her in a play up in Dundee where she was just fabulous. The only other person we didn’t find from that casting process was Malcolm Cumming, who plays John. It was a case of finding the right actor who had that energy, and I wanted him to be that little firework that popped off. It took us a while to find him, but I’m so glad we waited, there’s nobody else I could have wanted to play that role.

Was it difficult to maintain a balance between the various genre aspects?

It’s a tricky balance in making sure that in each scene we know where we came from and where we’re going to so that we weren’t just adding in silly jokes because we didn’t have one on that page. Alan poured over the script, and we worked really closely together in the beginning when I first started, right up to filming. Even when we were shooting, I wanted him as my on-set writer so that if I needed a joke or a line, he was right there.

I wanted the film to break into acts, so the first act was a zany teen comedy, making sure it’s bright and breezy and fun, taking the time to get to know the characters so you can laugh with them and see their teenage angst. That way when we start with the second act with the horror-comedy aspect, you know them and notice their little quirks, and they become three-dimensional characters and not just the 2D caricatures we kind of hope you thought they were in the beginning. Once we get to the third act of outright horror, you’re scared for them and worried for them, but we wanted to make sure that we still had fun in there, so even then there were bits of humour and physical jokes that we’d sneak in. 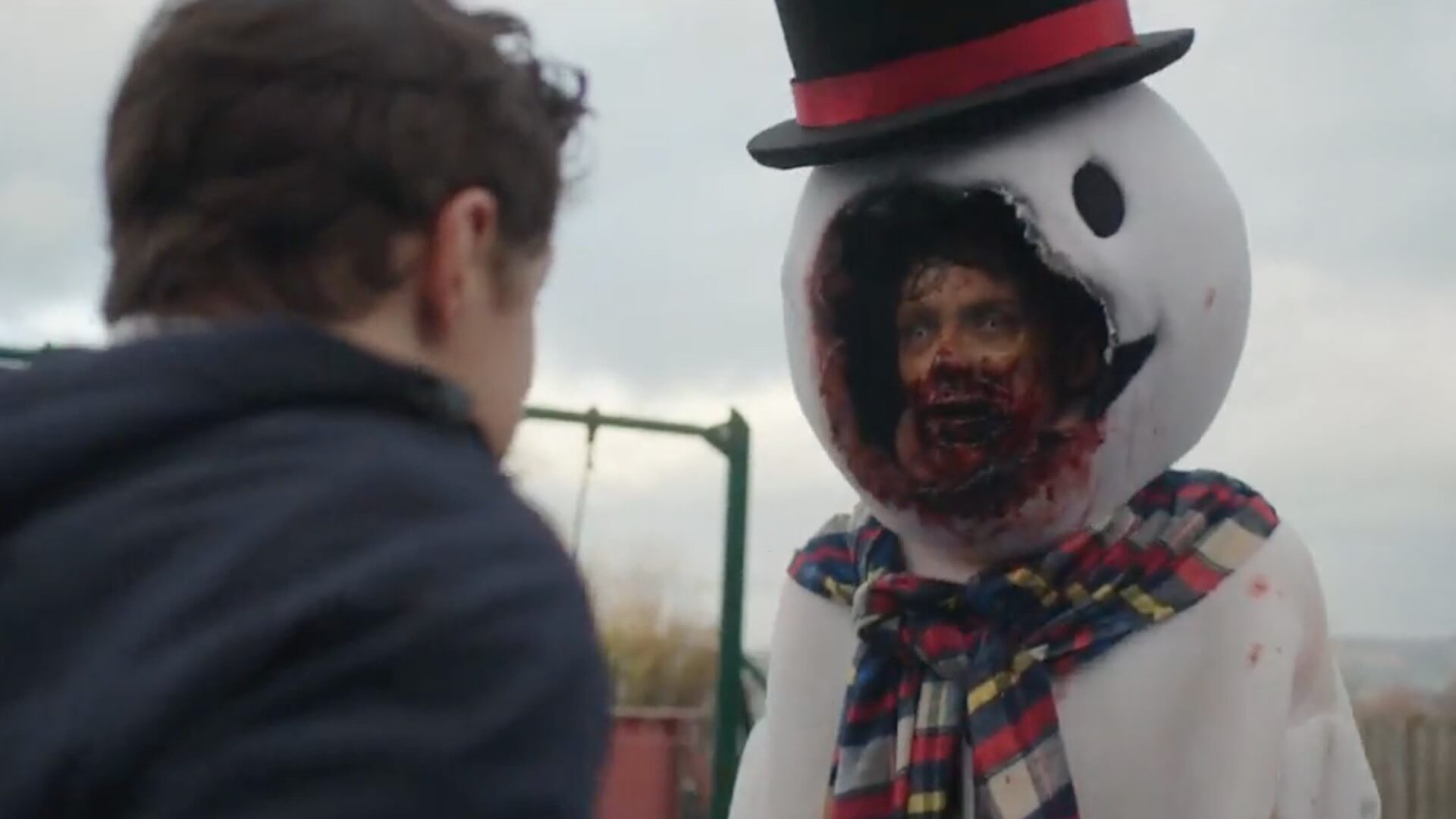 We often find that human aspect missing in horror films. Too often you have characters that you don’t care about, and so you’re not invested in whether they live or die.

I agree 100%. You want to love your characters because otherwise there’s no joy in it. You just think ‘I don’t care if you die, in fact, I’m glad if you die. Hurry up and kill them, Jason!’ I’m a big believer that if you can make people laugh you can make them cry and I always feel that comedy is the best way to get people onside with a character because if you’re laughing with them, you think ‘don’t you die, you’re funny. I’ve been enjoying watching you, don’t you go anywhere.’ I would hope that’s something audiences get. 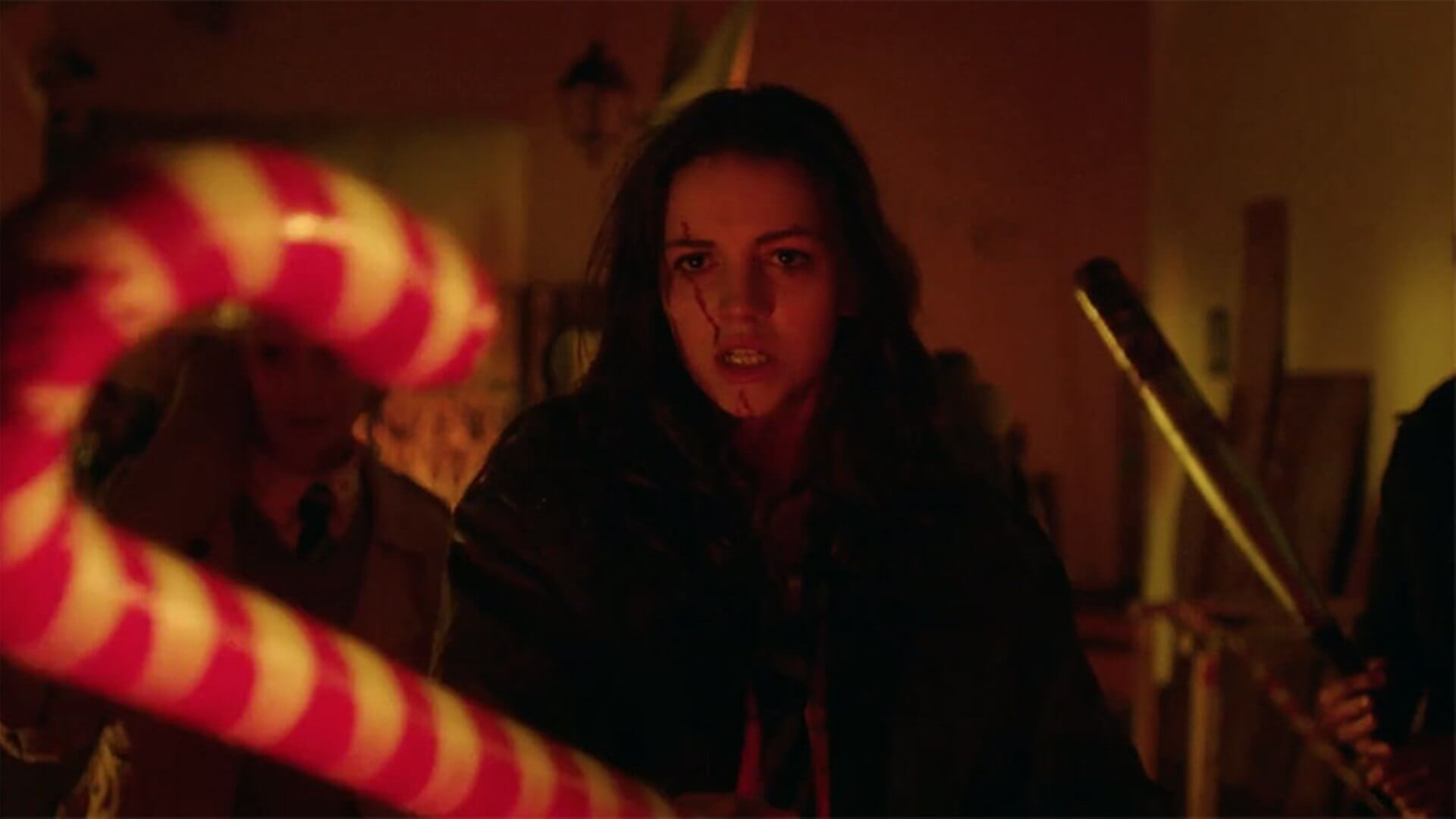 What made you decide to go with practical effects rather than CGI gore?

Being a horror fan myself, I know there are certain boxes horror fans want to be ticked. If you’re going to do horror, you want to see some blood and gore, and we wanted to break out the gore in specific areas and make sure we did it properly, with practical effects topped up with a little CGI. Even things like the head crush with the bowling balls or the snowman getting his head lopped off; everything was to be done for real. We just thought ‘we’re making a horror movie, we need to break out the gore and we need to have a bit of fun.’

Were there any difficulties in filming the more complex aspects, such as the fight sequences and the singing and dancing scenes?

My fight director is a woman called EmmaClaire Brightlyn. I cast her in my very first short film as my leading lady, so I’ve worked with her before, and we’ve got a really good relationship, and I trust her implicitly. My choreographer Sarah Swire - who also plays Steph in the film - is an amazing mover and shaker, she’s this ball of energy all the time. She was in Canada when we were in prep, and there were days when she’d be working in a coffee shop and taking a Skype call with me dancing at her.

When we were on set, everybody was just such a professional, and the background supporting actors were just so on it. I think Hollywood Ending, which is an elaborate song and dance number in the school canteen, was probably one of the things I was terrified about but it just went so smoothly. We had full tables of stuff but needed them clear so people could get up and dance on them, so Sarah got the dancers to build this into their routine, picking up their trays and shifting them between tables as they moved. My stand-bys and art team were going “We don’t have to do anything. They’re picking up and resetting the scene every time. We’ll just stand here and let us know if you need to move a bit of cardboard". 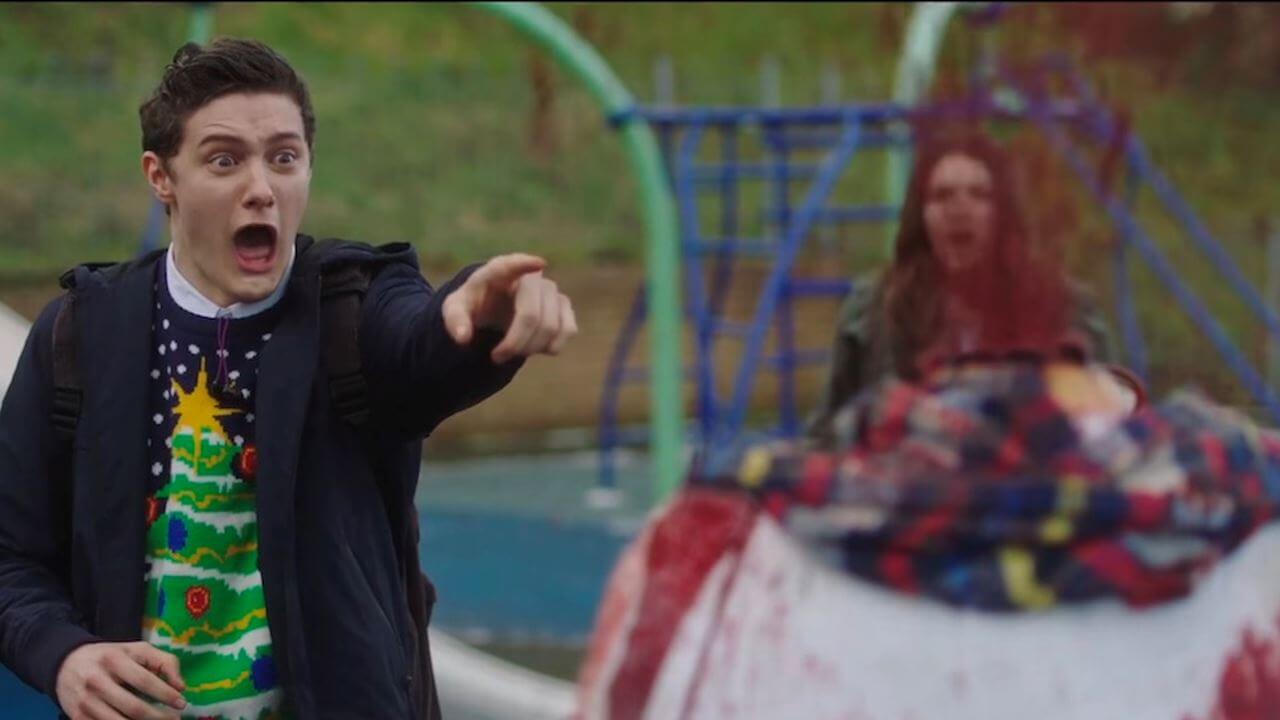 We’re sure everyone’s been saying this, but the film reminded us a lot of the Buffy the Vampire Slayer episode Once More With Feeling. Did you take any specific inspiration from it?

Alan is the biggest Buffy fan you’ll ever meet, so there were a lot of nods to that. I’m not - I’ve seen the odd episode and that musical one - but I’m not a big geeky person, and I don’t really watch TV shows; it’s usually films for me.

As well as the cross-genre aspects, there’s also a strong theme of the need for human connection, particularly during tragedies. Did you feel this was important to emphasise?

I think that at the time Ryan passed, the script took a darker turn, when Nick, Naysun, Roddy, Tommy, and Alan were dealing with the loss of a pal. To lose a friend is hard, even in your twenties, and it’s something you think about growing up and as a teenager, especially if you lose a friend or your grandparents pass away. We wanted to make sure we got across a big theme of kids dealing with death. As you say, there is that need for connection, and this is highlighted in one song about how we’re so far into our machines and devices that when a tragedy strikes you want that human connection. Not just a pick up the phone connection, but actually going to see each other and spending time with your friends. I hope that’s what audiences take away from the film.

Anna and the Apocalypse has its UK TV premiere on Horror Channel on Christmas Day.