In 2010, Howard and Jonathan Ford wrote and directed a fresh take on the zombie film with The Dead. Set within the soaring heat of Africa, a survivor of an airplane crash attempts to find his family while the undead take grip of the country. It was a bold and exciting change of pace from what we were used to from the zombie subgenre at this point, debuting just before the behemoth TV series The Walking Dead hit screens in October, 2010. It was as bleak as a zombie movie should be and paved the way in 2013 for a sequel, this time set in India.

The Dead 2: India, like its predecessor, makes no attempt to explain the zombie outbreak, instead just puts us straight into the action. However, it’s a subdued affair, and like the first movie, involves a trek across barren land and dangerous clime as our hero, Nicholas (Joseph Millson), attempts to reach his pregnant girlfriend, Ishani (Meenu Mishra), 300 miles away in Mumbai. Nicholas is an engineer on the wind turbines, a job that comes in handy later on when he needs to get things working to aid him on his journey. Along the way, he meets a small orphan boy, Javed (Anand Krishna Goyal), who he saves from certain death when the boy’s village is overrun with the undead.

The film kicks off, however, with a stunningly evocative credit sequence that juxtaposes the bustling cities of India with the poor and litter-strewed slums; the camera floating past the locations creating an almost 3D effect. Our first taste that something’s wrong is when a passenger on ship from Somalia (a neat link with the first film) stumbles home feverishly after his journey, dazed having been ‘bitten by a mad woman’ before boarding. In such a densely populated city, it’s not long for his disease to spread, and soon the dead will be tearing the throats of the living and stumbling slowly across the continent. 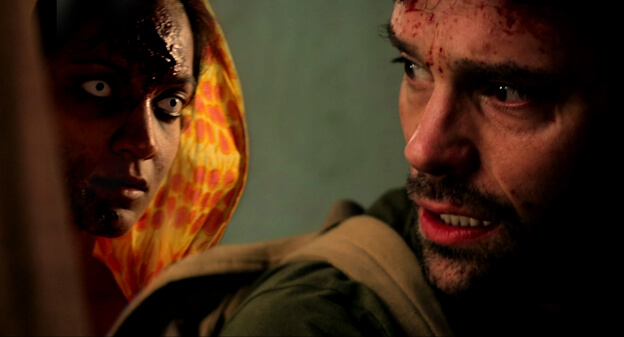 Not only does The Dead 2: India masterfully play with tension and deliver some gory treats, it’s stunningly photographed by Jonathan Ford, on triple duties as well as co-writing and co-directing. The opening shots have a nightmarish quality and pays homage to the likes of George A. Romero’s Night of the Living Dead beautifully. Effects-wise, the majority were done in-camera, with just a few CGI moments to smooth things over. Star Joseph Millson told reporters when interviewed at the film’s premiere at the Film 4 FrightFest in 2013 that he “had almost no idea what was coming on every bit of action,” revealing that despite the intricate script, the shock set-ups were as surprising to him as they are to the audience. The stunts were all him, too “I was black-and-blue; I have the scars and bumps and bruises to prove it - that was fun!” Millson had previously been best known for British TV series Holby City and The Sarah Jane Adventures but had actually worked with the Ford Brothers on his first acting role, La Belle Dame Sans Merci by John Keats, directed by Jonathan Glendening. He actually got the role of Nicholas after contacting the brothers about a film he was helping produce. The director wanted to call the movie The Dead, but Millson had heard of another film of the same name. Realising he’d worked with the Ford Brothers earlier, he contacted them and asked if they’d change their name. Naturally, they refused, but it put the actor back on their radar. 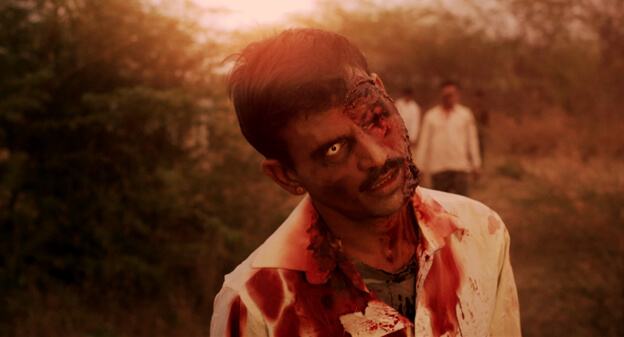 According to Millson, the Ford Brothers shot the film over the course of a month guerrilla-style on location after the Indian authorities refused permission. Whatever the reality, the brothers managed to do so much that was thought undoable. It was big ask, especially considering the action scenes the brothers had set up in the script. Many of these were intended for the first film, but that was such a harsh shoot, they were shelved. Here, though, there are no such reservations as Nicholas uses a paraglider and a vintage motorcycle among other things to make his escape. The army were also involved, appearing in the film and allowing the use of guns. The big problem authorities would have is the showing of the complete offensive contrast of the situation in the towns - opulent living overlooking the poorest living conditions you could imagine. Co-director Howard Ford said of the situation: “We all had tourist visas but when we went under the radar alarm bells must have rung as people from the ministry would consistently turn up at the hotels and bed and breakfast places where we were staying. However, we always managed to stay one step ahead of them as we were travelling 300 miles every other day. On one occasion we could see the flashing lights of police cars in the distance coming for us, but we still managed to escape in the nick of time”.

Like the first movie, in between the flesh-eating carnage and boiling hot road trip, there’s a real heart and human story. Nicholas’ motivation is the love of his girlfriend and the hope that he can save his unborn child. His unlikely friendship with the orphan Javid also spurs him on to ensure he’s safe too. There are awful decisions to be made along the way, though. Particularly when Nicholas comes across a young mother and child trapped in a crashed car.

Although The Dead 2: India wasn’t as well received as its predecessor, it’s deserves much more of an audience. Everything about it: the cinematography (how could you go wrong with the stunning vistas and evocative surroundings?), the subtle and haunting score by Imran Ahmad complements the images perfectly, and has the most simply effective zombies since Romero’s corpses shuffled across the screen. It’s also chock-full of gore, with the undead tearing pieces off victims and open wounds aplenty.

You get the chance to catch The Dead 2: India when it gets a UK TV premiere on Horror Channel. The channel will also be screening another film written and directed by Jonathan Ford and featuring sibling Howard in a small role, Offensive (2016). Set in rural France, it follows a retired couple who move into a house inherited by the male’s father, who helped liberate the village from the Nazis. As outsiders, they are besieged by a bunch of local thugs who have been conducting a reign of terror in the area and could have been behind the death of the father. A cross between Sam Peckinpah’s Straw Dogs and James Watkins’ Eden Lake in both tone and brutality, it’s another one not to miss. A sort of geeky side note: the lead character (Bernard, the son of the war hero) is played by Russell Floyd, who was DC Ken Drummond in the much-missed TV series The Bill for three years during its heyday. Now don’t tell us we don’t educate you…

The Dead 2: India and Offensive bookend Horror Channel’s FrightFest season in August, which highlights some of the best films from previous years’ festivals. Other titles include: Attack of the Adult Babies, A Lonely Place to Die, All Cheerleaders Die, Martyrs (2015 version), The Green Inferno, Ginger Snaps, and more. 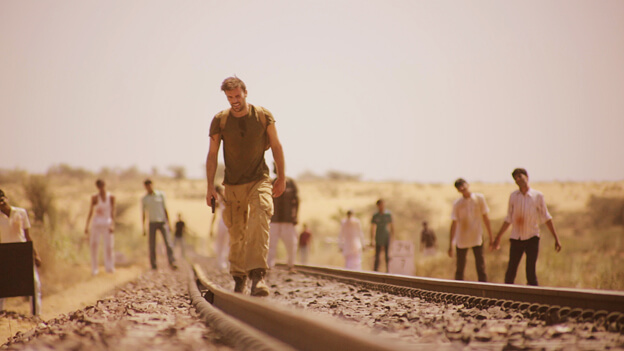