Since its release in December 1982, the science fiction horror film Xtro has alternately shocked, astonished, and disgusted viewers. Looking at the film's rather bog-standard story, one would never guess: Sam Phillips has a mysterious disappearance, seemingly by alien abduction, and just as mysteriously reappears three years later. However, it's the way the film chooses to depict Phillips' reappearance and various other plot points that result in Xtro's still-notorious reputation. The film's mix of gore and outrageously bizarre set-pieces still have the ability to make one's jaw draw drop a full 35 years later, especially the infamous scene of Phillips' rebirth. Considering the violence, nudity, and unrelentingly dark tone of Xtro, it's surprising that it managed to avoid inclusion on the infamous British Board of Film Classification's video nasties list. Anyone who saw it during the '80s VHS boom was marked for life by Xtro, and it's gained even greater infamy in the digital age. Viewers finally got their chance to see the film as director Harry Bromley Davenport intended when the movie hit Blu-ray from Second Sight Films. Ahead of the Horror Channel screening of eighties cult favourite Xtro, we caught up with the director HARRY BROMLEY DAVENPORT to talk about the restoration, the film's enduring legacy, and more...

STARBURST: How did you come to be part of the restoration for the Xtro Blu-ray release?

Harry Bromley Davenport: Some people in black suits came to my door, and they burst in, and they hit me over the head. They persuaded me that it would be in my best interest to cooperate, so I did, because I wanted to have another go at redeeming myself from the awfulness of the film, and I thought maybe I could help just a little bit by re-lighting it, which you know, you can do digitally.

So, I redid all the colour timing. They gave me a simply terrible inter-positive, you know, and it had dust and shit and scratches and all sorts of crap on it. I cleaned all that crap off, digitally, and then I just started again. Redid all the colouring and I made the whole film much darker because it originally looked like it was shot in a fish and chip shop. Not because of Johnny Metcalf - who was a lovely fellow - the DP, but we had so little time.

Don't forget, it was a union crew. They worked from nine in the morning until five in the afternoon, and you had to beg for overtime - which we couldn't afford, anyway. So, a lot of the time, you just don't have time to relight. On the first Xtro, I was trying to be a good boy, because it was the first union film, the first film with a proper crew, and all that sort of stuff that I'd directed, so I was very loathed to complain about anything or assert myself to the front office, because I was so glad we had the money for the fucking film that I thought, 'I'd better play my cards right and not get fired.' So, I compromised too much. 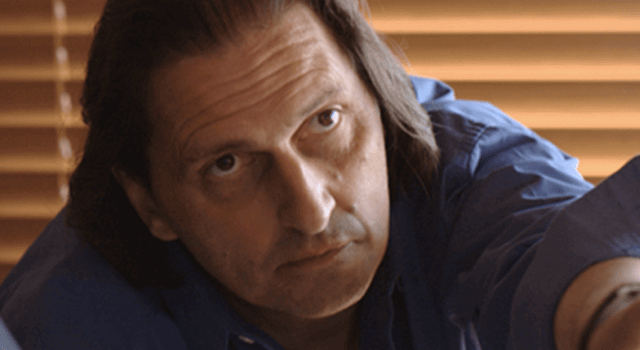 Having now looked at and paid so much close attention to the film during the restoration, are there any things that stand out in your mind from the original shoot? On the re-watch, we were struck by how early you show the creature, and how often it makes its appearance, which is very contrary to many of Xtro's contemporaries.

And to have a couple of lingering wide shots of it, too. That was quite intentional, and for precisely the reason you mentioned: people just want to have a glimpse of it, because it's usually more frightening that way. You think of the movie Alien, and you don't really see much of the monster at all. Even in the end, when you see it full-form, you can't really see it, because it's this whale colour grey against black. For the majority of the film, though, you don't see it. I thought it was very effective, and I thought it was a wonderful film, but it was intentional [in our case] because of the market.

The kind of punters who went to these films in New York - they want to know what the monster looks like. That's what they want to know. If we showed the monster, they would either laugh at it, or they would become engaged - but then they would wait for the next time the monster appeared because at least it would get their attention. I think that's why you see a lot of it, right away. It's a difficult thing because you don't want to give it away right away. It's like a stripper taking off all of her clothes, and then putting them back on. 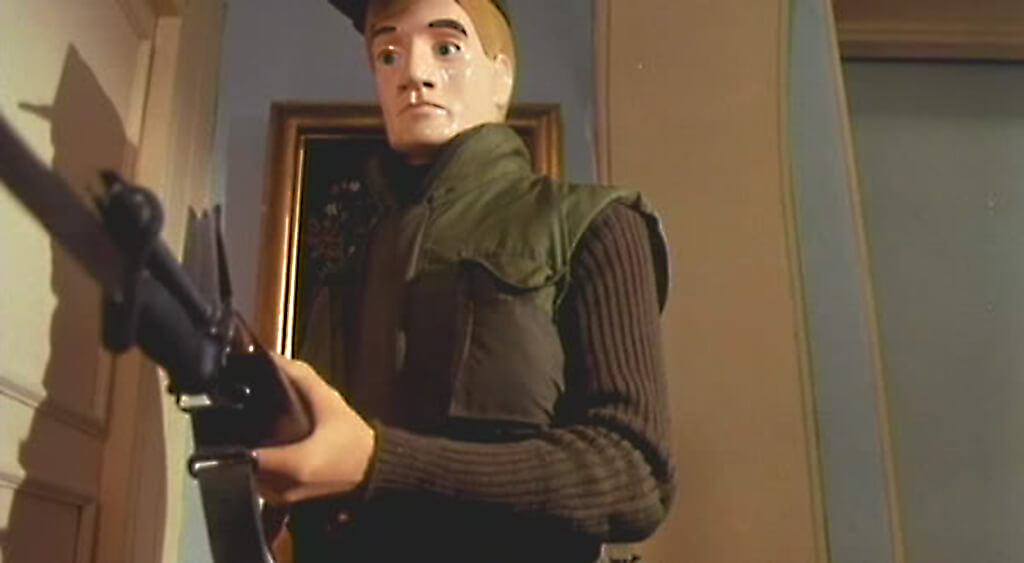 In addition to the monster from outer space aspect, Xtro has a lot of domestic relationships, such as father and son and husband and wife. Was it important to have that part of the film?

They still battle to continue their domestic lives, don't they? They still battle to make it all go right again, as it was before. They're trying to patch it up, you remember - setting up this soap opera situation? We were taking it all very seriously, so there was no snickering by the actors when they had terrible lines to say.

And there were some pretty terrible lines, like “I came from another world.” Ho, ho - Jesus Christ, how are you going to say that? Well, you get away with it when you have stage-trained actors who have been on stage, in front of a live fucking audience, alright? That's who we had - we had that type of actor, with that type of accent, and that type of performance. It's toned theatrical. It's not casual. We had these actors who were taking it very seriously, I'm happy to say because otherwise, we wouldn't have gotten away with the film.

Looking back on it, I think that they did it well. It's that sort of Shakespearean delivery, if you will, combined with the fact that it's absolutely ridiculous - the situation is absolutely absurd, as you've got panthers jumping out and parrots and snakes and aliens and this and that and people doing disgusting things to each other - and on top of all that, you've got these actors who are talking as if they're on stage at the Old Vic. People have said that it's got this sort of strange atmosphere, and I think it's because of that. 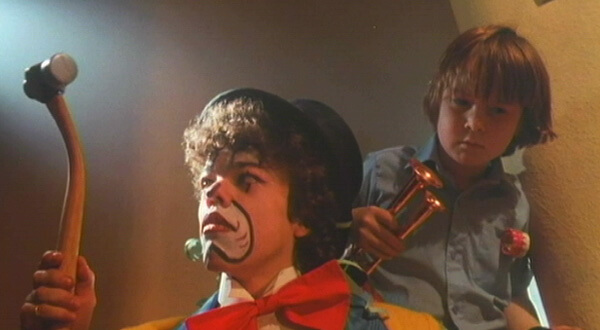 What stands out, visually, to you?

Looking at it for six months, doing the restoration, really made me look at it again, and I started to understand that this really is an odd film. I won't literally compare it to the first Phantasm, but that comes to mind. You see, it didn't really explain anything at all if I remember. Odd things happen, and they got away with it.

By the way, I resent anyone saying that we were a reaction to E.T. or something. I hadn't seen it, I had no idea. It always irritates me when people say I've made the 'anti-E.T.' Fuck off and die, you know? You've got a child and a monster, and that's it. With E.T., you have a cuddly monster, and then you've got a child - it's very silly.

You also provided the soundtrack to the film. Was doing the score yourself a matter of budgetary necessity?

No, I wanted to do it. I didn't want some dope coming in and putting his score on my film, thank you very fucking much. I knew what they'd do: they'd do a Hammer score, and take library music off old 78s, and say, 'That's good enough!' [imitates The Phantom of the Opera score] No, I wanted to do it. At the time, I didn't think I'd done very well, and then I went back to it, and I thought, 'Ah, Jesus - it's just these whining synthesisers.' Not really my finest hour. 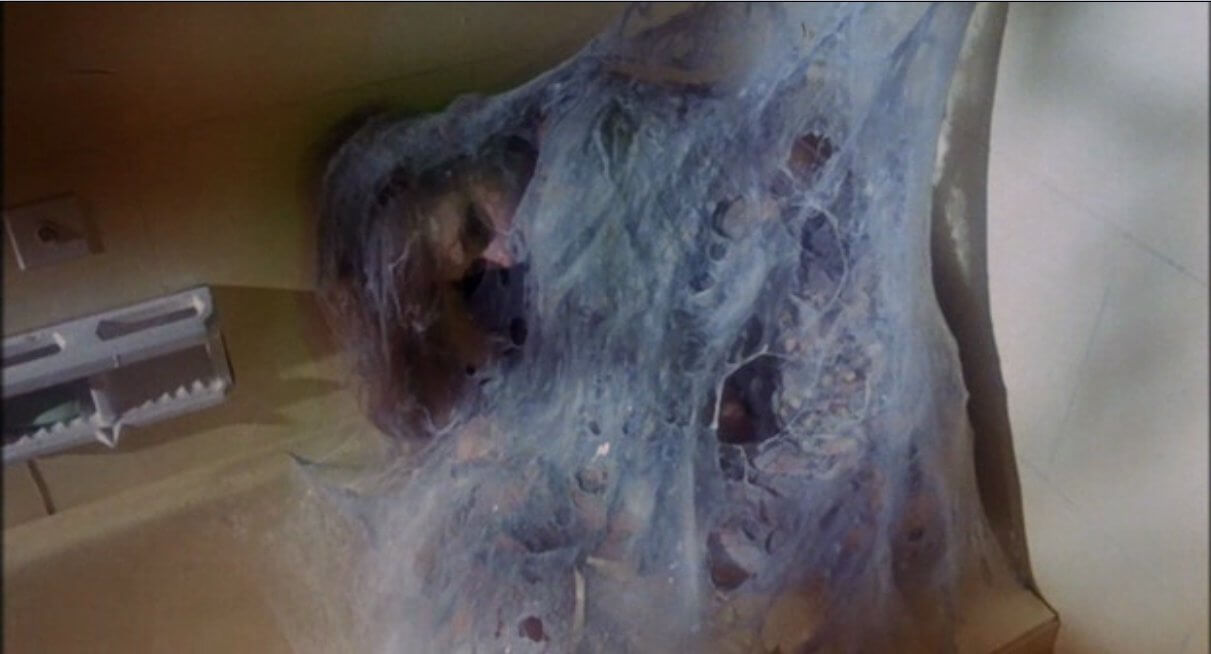