We’ve teamed up with Demon Records to give away ONE copy of the newly released Good Omens LP!

Available on vinyl for the first time ever, Good Omens is adapted and co-directed for BBC Radio 4 by the award-winning Dirk Maggs and is based on the novel by Neil Gaiman and Terry Pratchett. This 4xLP book set is presented on split colour black & white vinyl with exclusive sleeve notes written by Neil Gaiman and Dirk Maggs.

To be in with a chance of winning, just answer the question below and email comp@starburstmagazine.com with the heading ‘Good Omens’. Entries must arrive before 11:59 pm on November 26th, 2019.

What year was the first Terry Pratchett Discworld novel published in? 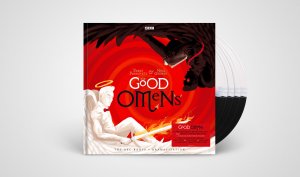 When Aziraphale (Angel and part-time rare book dealer) and Crowley (an Angel who didn’t so much Fall as Saunter Vaguely Downwards) learn that the Antichrist has been born on present day Earth, they agree to work together to prevent the End of Days. Eleven years later, all bets are off when innocent Adam Young discovers he has the power to bring about Armageddon. As the stage is set for a showdown between the forces of Good and Evil, the prophecies of Agnes Nutter, Witch may yet come true…

For the first time ever on vinyl, Good Omens is adapted and co-directed for BBC Radio 4 by the award-winning Dirk Maggs (The Hitchhiker’s Guide to the Galaxy; Neverwhere; Stardust; Anansi Boys; The X-Files; Alien; Batman; Superman). It is based on the novel by Neil Gaiman and Terry Pratchett, now the basis for a major Amazon Prime TV series premiering in Summer 2019.

The unique four 180g heavyweight heaven and hell split black and white vinyl — includes a laser-etched Side B — are presented in illustrated wallets inside a rigid, bound 16 page book, with exclusive sleeve notes written by Neil Gaiman and Dirk Maggs.

Demon Records and STARBURST do not accept any responsibility for late or lost entries due to the Internet or email problems. Proof of sending is not proof of receipt. Entrants must supply full details as required on the competition page, and comply with all rules to be eligible for the prizes. No responsibility is accepted for ineligible entries or entries made fraudulently. Unless otherwise stated, the Competition is not open to employees of: (a) the Company; and (b) any third party appointed by the Company to organise and/or manage the Competition; and (c) the Competition sponsor(s). This competition is a game promoted STARBURST. STARBURST's decision is final in every situation and no correspondence will be entered into. STARBURST reserves the right to cancel the competition at any stage, if deemed necessary in its opinion, and if circumstances arise outside of its control. Entrants must be UK residents and 18 or over. Entrants will be deemed to have accepted these rules and to agree to be bound by them when entering this competition. The winners will be drawn at random from all the correct entries, and only they will be contacted personally. Prize must be taken as stated and cannot be deferred. There will be no cash alternatives. STARBURST routinely adds the email addresses of competition entrants to the regular newsletter, in order to keep entrants informed of upcoming competition opportunities. Details of how to unsubscribe are contained within each newsletter. All information held by STARBURST will not be disclosed to any third parties

Actor Jason O’Mara has been the animated Batman for the better part ...

Actor, writer, director, podcaster, and producer Brea Grant has been ...