Vampires have been fashionable cinema and TV fodder for several years. But sadly, they have recently not been the same species of bloodsuckers that die-hard horror fans are used to. There are an increasing number of fans who want to dispel the notion of the night stalkers as angst-ridden teenaged heartthrobs and get back to the vicious, predatory monsters who would eat us rather than greet us. Luckily, visionary independent filmmaker Tom Paton had just the idea for a script to satisfy our cravings. Fresh from his sci-fi thriller Pandorica, which had proven a hit at film festivals a year earlier, Paton opened the crypt and unleashed a savage vampire cult on the prowl in a sprawling national park in the United States. Rest assured, these vampires weren’t romantically inclined, but they were hungry. The film follows an ordinary young couple, Josh (Mike Beckingham) and Beth (Tatjana Nardone) who go hiking in the Redwood National Park. As they arrive, they meet a quirky park ranger named Steve (Muzz khan), who helpfully gives them a map of the park, and in time honoured horror film tradition, warns them to keep to the path, and not to wander into the grey area. Straying into the said area would be foolhardy, dangerous and invite dire consequences.

As the plot unfolds, we understand that Josh is a recording artist, fearing the end of his shelf life as a singer. He is also suffering from leukaemia - the disease that claimed his beloved grandfather. And this adventure break with his partner is meant to recharge his creative batteries for one more album, which may also be his last. Beth, on the other hand, is more emotionally fragile about the situation and is beginning to unravel. Naturally, they decide to leave the path and take a shortcut, which is when they meet an enigmatic Park Ranger known only as Vincent (Nicholas Brendon), who carries with him a bag full of sharpened wooden stakes, who, when asked what kind of ranger he is, replies “a special kind of ranger”. Before leaving, Vincent asks cryptically if either of them is sick, and warns them to be careful. As night falls, the couple start hearing inhuman screaming noises and see the vague shadowy outline of a partially clothed person, crouched on a nearby rise. It soon becomes clear they’re not alone and this is exactly why they were warned to stay on the path. Redwood has a secret. Deep amongst the trees is an abandoned mausoleum. Abandoned - that is apart from the feral nest of vampires lurking there, guarding a grim statue whose purpose will soon become clear. Written by Paton and shot on location in Poland on a micro budget, Redwood is a visual masterpiece of creativity, showing that horror is all about the atmosphere and that jump scares and excessive gore are often needless window dressing. The mounting sense of menace as our two hikers approach a date with destiny is intensified by the performances of both lead actors Mike Beckingham and Tatjana Nardone, who come across are genuine real people, with normal, every day concerns. The fact that we get to know them so well over the course of the film gives an added impact to the conclusion of the film, which we won’t spoil here for the benefit of those viewers who have yet to see the film. We caught up with Tom Paton for a chat about Redwood, and we started by getting the low down on his career: “I’m a self-taught writer, director, and editor and have been working in film and TV for the past 12 years,” he told us, “at some point or another, I’ve ended up doing pretty much every job you need on set and a lot of the music videos I’ve directed were a tiny crew of two or three people. I’d built up a nice reputation as someone who could get the job done quickly and on budget and made the leap to feature films in 2015, when I wrote and directed my first film Pandorica.” He continued by getting into the story of the film: “The process of writing for me has always been about focusing on one particular theme. I like to zero in on whatever that is and then use my characters to fully explore and dissect the different arguments you can make around that. Redwood was about how we cope with an unfair world and what that can turn us into over time.” He went on to explain “The characters of Josh and Beth are a normal couple forced to change and mutate into different people when they are told Josh is suffering from leukaemia at a young age. The movie is really about the effects something like that can have on two people.” 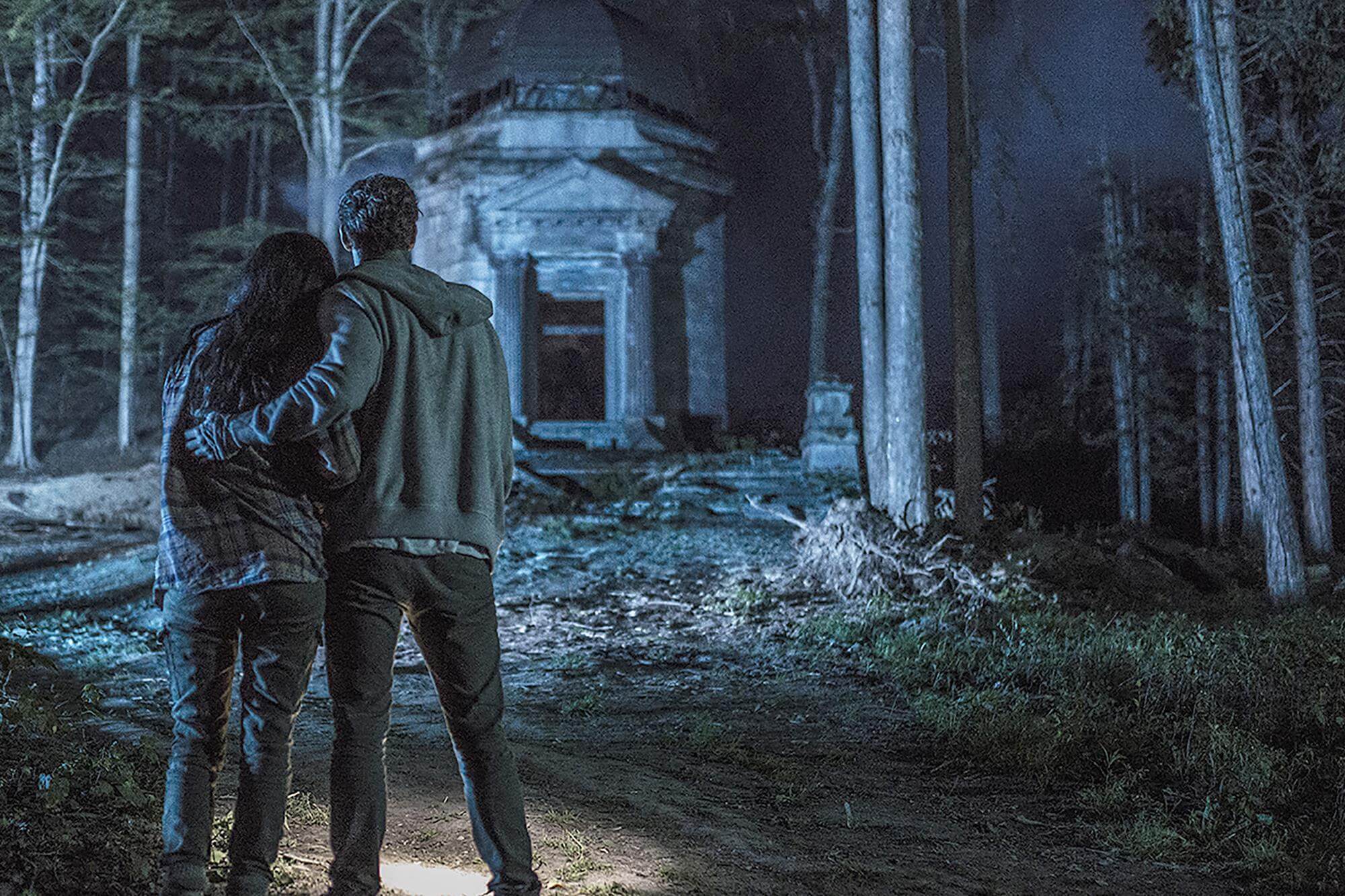 What about the influence for the film, though? Tom expanded, “I’ve always loved more character focused horror, particularly movies like The Descent where you spend 30 or 40 minutes just getting to know the characters before you start to terrorise them. It’s not something that modern horror does a lot of and it was a rough sell to convince people to let me do it. But I think Redwood works because it’s committed to getting to know Josh and Beth and isn’t in a rush to start throwing the creatures at them.” We wondered if Nicholas Brendon was always in the director’s mind for the role of Ranger Vincent and, considering we couldn’t help but notice that the number of years Vincent says he's been in the woods ties in with when Buffy's last season finished, if the part was deliberately written to play it as kind of an older Xander? Tom is honest: “I’m a huge Buffy the Vampire Slayer fan. As a kid I started senior school the year it started on TV, and it ended just as I was leaving, so every season felt like it was talking directly at me. Particularly my sense of humour as a writer, I think, was something that came from the character of Xander and so a lot of the time, dialogue I’m writing feels like it could come out of that character’s mouth. So, when Nicholas agreed to do the part, it just felt like a really wonderful fit. And yes, you are right, there are a lot of nods to the show in Redwood and the time since it’s been off of the air is one of them. We had to ask about plans for any possible sequels, and if we’d see any more of Vincent or if we’d follow the surviving characters - Tom lets us down gently: “The thing with Redwood is that it sets up this more Lovecraftian, unknowable mythology for what vampires might be and what they are created for. It seems to be a lot more about worshipping this creature that is so old, that it’s literally sprouted roots and settled in one place like a tree.” It’s not all over though, as he reveals, “I think there is a lot to explore there and a sequel would likely go off in a completely different direction. I’d love to do a period horror film, set a few hundred years ago and explore more of the mythology for the mausoleum and the creatures themselves.” Redwood had great success on the festival circuit and, for a British indie film, did well on DVD, and Tom is rightly happy with this: “I’m very proud of what the film has managed to achieve since we put it out there into the world. It performed incredibly well over its festival run. It started as an opening night film at FrightFest and then eventually picked up a National Film Award and also bagged an American Movie Award.” Impressive indeed, and Tom’s follow-up film, Black Site debuted in 2018 to an equally good response. His next film will be Stairs, which is currently in post-production and you can read about in a future issue of STARBURST. REDWOOD screens  on Horror Channel . Tune in on Sky 317, Virgin 149, Freeview 70, and Freesat 138.