We’ve got three Blu-ray copies of SLEEPWALKERS to give away in our competition so do not delay enter below.

Eureka Entertainment to release Stephen King’s SLEEPWALKERS; a supernatural thriller about the small-town exploits of shape-shifting, incestuous, psychic vampires; on Blu-ray for the first time in the UK as part of the Eureka Classics range from 19 October 2020, featuring a Limited Edition O-Card Slipcase and Collector’s Booklet [First Print Run of 2000 copies ONLY].

Stephen King’s Sleepwalkers is a classic horror story that takes a perfect Normal Rockwell town… and turns it inside out.

Brian Krause, Mädchen Amick (Twin Peaks), and Alice Krige (Chariots of Fire) star in this terrifying tale of modern-day vampires who move from small town to small town to prey on virtuous young women. Imperceptibly inhuman to everyone except for felines, these vicious shapeshifters have their eyes on a new victim: Tanya (Amick), who has fallen for Charles, the new boy at her school.

Making its debut on Blu-ray in the UK, Eureka Classics is proud to present Stephen King’s Sleepwalkers

SLEEPWALKERS, Stephen King’s supernatural, psychic vampire thriller, is OUT NOW on Blu-ray and can be purchased here https://amzn.to/3231HTm 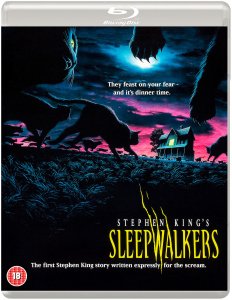 To be in with a chance to win a copy, just send your answer to the question below to comp@starburstmagazine.com with the header ‘SLEEPWALKERS’ to arrive before 11:59pm on Sunday, October 30th

Which of the following statements is true?

A) Sleepwalkers was the inspiration for the hit musical Cats.

B) Sleepwalkers stars ageless pop singer Cher as a wise cracking but ultimately murderous bare knuckle fighter from the future.

C) Sleepwalkers was the first film written by King to not be based on one of his preexisting works.

Available to order from: