Composer Emile Mosseri has, in his short career scoring feature films, worked on some very notable productions. He scored director/producer Joe Talbot's debut, The Last Black Man in San Francisco, has worked with Miranda July on Kajillionaire, and also tackled the second season of the Amazon series, Homecoming. His latest score is for Lee Isaac Chung's Minari, a drama about a Korean American family trying to make their way as farmers in rural Arkansas.

All of these might be very different films, but Mosseri's scores for each help define the world in which they take place through superb use of melody and pop sensibilities. We spoke with the composer about his process.

STARBURST: It seems like your career as a composer has really jumped up very quickly.

Emile Mosseri: Yeah, it's been sort of a strange time right now to have this kind of experience during this lockdown. What would already feel surreal feels even less real because it's all virtual. It's a strange time to be busy in this way, but I'm really grateful for everything, as well.

Was the score finished before lockdown or did you have to deal with trying to set up groups to play this music remotely?

Luckily, I didn't have to deal with that. I know a lot of other composers that did but thankfully, I actually finished two scores right before. In January and February, I turned in a few projects and we recorded an orchestra for the TV show in February, so it was really right by down to the wire. Trent [Reznor] and Atticus [Ross] and a bunch of other composers miraculously recorded during lockdown in really inventive and exciting ways, but it seems like one challenge that I wouldn't want.

It seems as though almost everything you've done has been with directors who are, essentially, peers of yours in terms of age. Is that just happenstance or because you are in the same sort of circles?

I think that I have gotten been very lucky to be connected with amazing directors that I admire. I got lucky to work with directors that are making really pure and honest works. That I've been able to collaborate with them and try to lend my thing to their vision and try to be part of the team. Each film and each director are very different in all kinds of ways, so what's exciting about this job is that it's constantly changing.

We’re glad that you said the films and directors are all different because your scores are also all quite different. It also seems they're all – and we apologize for using this word, but we couldn't think of a better descriptor – they all seem very pretty.

Thank you. That's a great. I'll take it.

Is there a specific root from which you're working when you start on a score?

I think I'm mainly trying to internalise and absorb the film – and the spirit of the film – emotionally and then, I just write a bunch of music from that place and then send it to the director or play different things for the director and then we find our score from inside-out. I think that's the thread.

We've talked with a bunch of different composers and some get to start with a script or when the script is just finished and others come in and they're scoring to what is a mostly-edited film. What's been your experience? Have you gotten to start early on or later or has it been a combination of the two?

It depends, project-to-project. Some films I get involved with, they bring me on board once there's an early cut of the film – when they've already shot it, but they haven't finished the edit. With Kajillionaire, it was a locked cut before I got my hands on it and then Minari was the complete opposite: I'd written from the script stage before they started shooting. Each film in each process has been very different and I think that shapes the score, in a way. 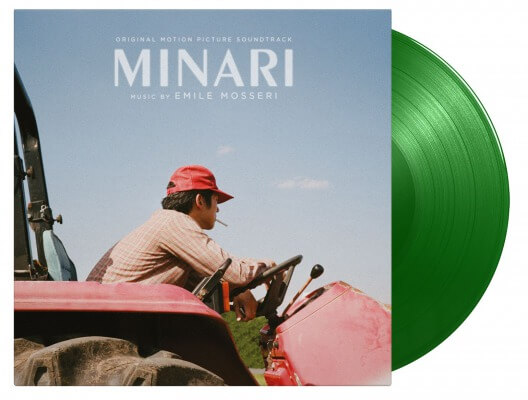 We have noticed that you do have a few through-lines in your scores: sweeping strings, choral accents and, obviously, piano seems to be a big part of your work. Are those intentional things? You're not using them like throughout every score, obviously, but we noticed – especially in The Last Black Man in San Francisco and Minari – these little choral accents that really grab the ear.

Yeah, I think that there's certain things that I gravitate toward. I think the human voice is one of them. I like to have some sort of singing in my scores. I think there's just a way to breathe life into the score – literally, if in different ways, sometimes. Most of the time, I use other vocalists sort of snuck into the mix – even if it's a subtle way – to bring some character to the tapestry and to the fabric of the score.

Piano is another one, just because I compose using the piano, so that ends up in a lot of the scores in one way or another. Strings and woodwinds and other orchestral elements – I think it's case-by-case. It's always a dream to be able to use an orchestra if the film calls for it.

Speaking of vocals: Minari marks the third time you've collaborated with another artist to record a song for a film. You've done it previously for Kajillionaire and The Last Black Man in San Francisco, but this song is very interesting because it's got Yeri Han singing it and these lyrics had to be translated from your English into Korean so it seems like that's a very involved process because there's translation involved, on multiple levels.

That was a dream. That was a very cool process for me that I'd never experienced before. I'd never written a song in English and had it translated into another language before. I'd had the idea to write a song for the end credits of the film. Then, this amazing lyricist – Stefanie Hong – had translated my song into Korean and sent it to Yeri. She would then send us these tracks from Korea and we pieced it together here.

The song also became this kind of lullaby, because of Yeri's part in the film. It was amazing to have her sing: it took on a whole new meaning. It was just a really cool thing to have a song that was inspired by a film and then be sung by somebody that was such a huge part of the film. It was like a nice full-circle. When a piece of music gets touched by hands and it has a progression like that – that was really rewarding.

Does having pop songs in a film come out of your indie rock background or is this more a director's choice?

I think it's something that is both. The director needs to be on board and sometimes it depends on the film. Sometimes it's the director's choice but I do think that I try to make a point to have a song on each record or something in each film, but also have – even within the score itself – to try to write song-based music or melodic music or lyrical music, even when it's instrumental. I think that just comes from being a songwriter first, then a composer.

With every composer, I think they take their experience and their background, and their natural instincts will be shaped by their experiences musically, so that'll bleed through in their work. I'd like to think that's why that's happening in the films that I'm scoring.

Last year, your music was twice released on vinyl by Mondo, with the music for the second season of Homecoming, and also Kajillionaire. Is it cool to get to be embraced by this very hot, hip vinyl soundtrack label?

Absolutely. Mondo's amazing. They did incredible work with the packaging on both Kajillionaire and Homecoming and I was very shocked to work with them and with Lakeshore and BackLot and now, Milan Records and Sacred Bones for Minari. It's great to work with these labels that are championing soundtrack music. It's a very cool thing. I feel lucky to be in the mix. It's such a wide-ranging group of labels, but I feel like Sacred Bones has a very different aesthetic than Mondo, but each brings something else to it, which is cool.

Are you a physical product person? Is it cool to have your scores exist somewhere other than digitally?

Very much. I love vinyl and there's nothing like holding the record in your hands, you know? That's the most rewarding part for me. That the record ends up in some people's houses, if we're lucky: there's something really special about that experience that can't be replaced digitally.

The soundtrack for Minari is available now.