Derek Landy is an Irish author and screenwriter whose credits include the horror comedy movie Boy Eats Girl and the award-winning Dead Bodies. Derek is best known for his Skulduggery Pleasant series of books, and the latest book in the series, Bedlam, is out now. We caught up with him to find out more.

Derek Landy: Valkyrie Cain goes up against the High Sanctuary itself in a desperate effort to save her sister, and there’s nothing Skulduggery can do to stop her.

How would you describe the Skulduggery Pleasant series to an elderly relative?

I would sit them down in a comfy chair and tell them, very gently, that this is a series about a skeleton detective and a girl with an awesome power. I’d tell them about the bickering, the sarcasm, and the intricate plot-weaving. Then I’d take them through each of the decapitations that occur in the books and assure them that’s it’s all been done in the best possible taste.

Where do you even begin with a book like this? It’s quite a long-running series…

I get asked this all the time, so I’ve learned to smile beatifically and say “It’s all part of the plan...”

To get to Book 12 and still be able to surprise the readership is a wonderful thing, but I’m only able to do that by sticking to the basic outline that I’ve had in my head for the last 14 years. This is all one big story, so thankfully the only time I’ve ever really faced that dreaded first blank page was way back at the beginning.

How different is writing a book from script writing?

In a lot of ways, I prefer writing books. Writing screenplays is a lot of fun, and making movies is a dream come true — but as a writer, if you want total control over your story, you need to write a book. You can’t write a film and then complain that it didn’t stay true to your vision.

I wrote two films before the first Skulduggery Pleasant book, and graduating to that level of control and responsibility was just this wonderfully addictive thing that I couldn’t get enough of.

That said, I do miss movies terribly. Being on set, watching the crew bring the script to life, watching the actors live and breathe as your characters... It’s a level of excitement you just don’t get sitting at your desk in a quiet house in your slippers.

What character is the most fun to write?

Valkyrie Cain would be my favourite character, because she’s the one the series revolves around, but Skulduggery is a blast. His origins are all those Bogart and Bacall movies I used to watch as a kid, all those Cary Grant movies, where everyone talks really fast and they’re all so impossibly witty. I grew up with a stammer, so I was never able to talk fast when I was younger, and I think my love of that rapid-fire dialogue is a direct result of that.

And if any character from your books could have their own action figure, which one would it be and how would they react?

Oh, Skulduggery. Definitely. Now that I think of it, he’s probably appalled at the fact that he doesn’t have one yet. He’d be of the opinion that if anyone deserves an action figure, it’d be the sharply-dressed skeleton with the impressive cheekbones.

Which character seriously needs to have a word with themselves?

Most of them...? But especially Valkyrie. She’s been through an awful lot, the poor girl. She was introduced to this crazy world of magic and monsters at the age of 12 and now she’s 25 and she has some serious, serious issues.

Of course, it could be argued that Valkyrie has already had a serious word with herself — and that didn’t go too well.

How long did it take to write Bedlam?

It usually takes me six months to write a book, and Bedlam was no different. That usually works out as three months of writing a few hours a day, taking time off to play video games, read, watch movies... and then another three months of frantic, obsessive work where nothing else gets done. I’ve missed plenty of deadlines over the years, but never the important ones...

What makes this book different from the others you’ve written?

We’re in what is, basically, Phase Two of the Skulduggery Pleasant series. Phase One was books 1 to 9, after which Valkyrie took a few years off before another crisis kicked into gear and she was dragged out of her self-imposed exile. In Bedlam, I’m continuing an exploration of her as an adult, coping with everything she’s been through and coming to terms with everything she’s had to do in order to beat the bad guys and win. In this book, all that trauma really takes its toll, so it’s been fascinating examining that side of her. After 14 years, she’s still surprising me.

What has been the most interesting shift in genre writing in recent years?

I’m going to take “recent” to mean the last 20-odd years, okay? Because then I can say Harry Potter. What Rowling did changed everything. By proving that adults would read books for younger readers, I reckon she’s responsible for the fact that your local bookshop now has a massive YA section filled with all manners of goodies.

Next is more Skulduggery. I’ve got to finish this story before I can focus on anything else. But once that’s done? Oh, I have dreams. I have dreams about books that need no sequels. Single, one-off books that are not part of a series, that tell a story and then... stop. But maybe I dream too big.

What tropes do you personally avoid the most?

I try to avoid the dumb tropes — like where a character has to die in order to spur another one on. (When my characters die, it’s either for a Very Good Reason or just because I’m in a mood.) I love the Chosen One trope just as much as I hate it. When it’s done well, it’s amazing. When it’s done badly, the plot only moves because of a prophecy, and once you notice it, it will drive you insane whenever it crops up. I’m doing my very best to subvert the Chosen One idea in the Skulduggery books with the introduction of Omen Darkly — the useless twin brother of a heroic, strong, capable Chosen One. I get to work out all my vexation there.

I’ve had an idea for a horror novel in my head for ten years and I haven’t been able to knock it into shape yet. But I will.

If you could take one piece of art, music, movie, book, etc and ensure it would last until the sun dies out, what would it be?

This is one of those questions that threatens to overwhelm me, so I’m going to take the easy way out and point to my bookshelf and say Red Dragon, by Thomas Harris. A perfect thriller.

If you could give the 16-year-old version of yourself any advice, what would it be? Would you listen?

And risk corrupting the timeline, are you nuts?

But okay, if it was guaranteed not to impact the future in any negative way, I’d tell him that what he’s doing is right. The way he daydreams all day in class? The way he draws comics instead of doing homework? The way he’s writing stories instead of studying for exams? Keep doing that. Don’t let anyone dampen that imagination. There is no one way to success, or one route to happiness. Be prepared to work hard, but work hard on your own terms.

Bedlam is out now and can be found in all good bookshops. 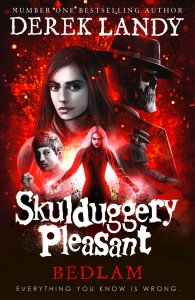