Following a successful festival run, Brea Grant’s latest film as a director 12 Hour Shift hits the digital realm in the UK. We caught up with the versatile David Arquette, who acted as a producer as well as acting in the movie, to find out more…

STARBURST: For anyone who doesn’t know, what’s the concept of the movie?

David Arquette: It’s a 12-hour shift in the ‘90s at a hospital; a nurse’s experience of a night that goes way out of control. She’s involved in, at first it seems a crime without a victim really, when people die whether they’re donors or not donors, they’re taking their organs are selling them on the black market. But it takes a really nasty turn and really starts snowballing after that [laughs].

As you mentioned, the film is set in the ‘90s, where the significance of that era?

Well, especially in respect of what we’re living through right now, it does seem like a much simpler time where social media wasn’t a powerful force. There was just an element of fun and a carefree element that was going on back then, which really appealing to me.

You’re also producer on this film, what did that involve?

My wife, Christina Arquette, really did the heavy lifting in the producer department, and HCT media, Matt Glass, Jordan Long, and Tara Perry, they were the main producers. My thing was calling up Mick Foley and asking if he’d do us a favour and be part of a little independent film. I do the weird stuff, like trying to take the edge off a little independent film, like getting some craft service, different snacks, different meals, just helping move the ball forward really.

Did you and Mick Foley bond over your death matches/match?

[Laughing] He was really funny, I’m probably getting this wrong but I mentioned something and he said he was going to put it through his ‘instantaneous risk/reward calculation’ or something like that. In the moment, even though a lot of the things are planned, some of things are like “well I, uh, guess I’ll go for this”, even if it might be risky or something. He was really fun, he’s been really supportive, and he’s just an incredible guy. If you don’t know, he loves Santa Claus, he really loves Christmas and the beauty of that. So much so that he’s even got his own Santa stationary, and he’ll write these really detailed handwritten calligraphy letters from Santa to all the kids of his friends. He’s just such a generous guy and such a talented actor. He did such a great job and he’s just so effortlessly intimidating.

Your character in the film is a much grittier, bad ass than previous roles. How was this for you?

It was fun, I love playing the bad boy, a smouldering kind of character who’s tough. It was right along the run of all my wrestling, so I was in pretty good shape at the time and was just able to lean into it. He was a character who essentially wanted to get out of jail so he could get to a hospital, so he could get high. That is what was in my mind of what got him there. So that’s what I leant into.

Is that a role you’d like to play in future?

What going to a hospital and getting some drugs? [Laughs]

A sort of bad ass guy…

I’m just kidding. Yeah, right now I’m on a little independent pilot in Memphis and yesterday I had this scene where I’m this bad ass drug dealer. It’s weird, I’ve been acting for 30 years now, so it’s funny, the older you get, the more bad guys you play for some reason, or at least for me. I don’t know why that is, it’s kind of interesting, you get different opportunities, you know, it’s fun not to always play the goof character. I get it, it’s a part of my personal character and I really believe in drawing from what you know. But yeah, it’s fun. I like playing all different kind of roles and being in all different kind of films. I’ll do a kids film, and I’ll do a horror film, and I’ll do a dramatic film and a romantic film, so just being able to have those opportunities is a blessing and I feel very grateful for it. I haven’t lost the love for acting, I haven’t lost the love for being part of movie making, for that I’m really grateful.

What’s the longest shift that you’ve ever done?

We’ve done easy 18 hours on films, on something like this, an independent film, I was up until like 2.30am, woke up a 7am, got back to the set a 9am. Filmmaking, a lot of the time, there are really long hours, especially if it’s something physical. Or like in wrestling where you’ll do a match, you’ll hop in the car, drive 200 miles, get a little sleep, you wake up, you go to the place, you wrestle, get beat up, get back in the car. Sometimes the clock doesn’t stop, so I don’t know the longest shift I’ve ever had! On a typical job, I guess 12-hour shifts is typically what I’d do, but you know I started acting when I was 17, so I haven’t had a tonne of other jobs. I worked at newsstand, I worked for a delivery company, and I [laughs] sold maps to stars homes.

Currently in the UK we’re in lockdown, how has the situation affected you and how you work?

Oh man, right now we’re doing this little independent pilot, we got shut down twice because of COVID [sighs]. We had to test people, and contact trace and make sure everyone’s safe and that the set’s really safe. But on a personal level, I think it’s really had us all take a hard look at ourselves, and for me, it’s brought a lot up for things I still need to work on, as far as patience, or I tend to be moody at times. Just Figuring out how to navigate the world in way works for you, that’s also within the flow of what’s going on, then when obstacles come and how you address them. The older I get, I’m able to recognise “oh why am I feeling this” and “why’s this exchange with this person bringing up this thing in me”. Typically, if you’ve done therapy and you start looking into why you react to certain things, you can identify them a little easier, and then it gives you tools on how to not take things personally, to recognise that this might be what this person’s going through and it doesn’t really affect me personally even though it’s feeling like its personal.

I do a lot a lot of writing in the STARBURST video games section. You were in a couple of sport titles back in the early noughties, do you have any interest in video games?

I love video games, but I haven’t really had the time to play them recently. We have kids, so they play some games. We try to limit, but it’s been hard in lockdown because it’s like something they love doing, so you want to allow them to have and enjoy them but, you also have to parent what games they’re playing. And it doesn’t really allow me to play Call of Duty in the house. I haven’t been playing games recently, but I love being a part of them. I’m supposed to be a part of one coming up. I love the world of video games, there’s just so much that goes into it, the designing of them, the art, and the storytelling that’s involved. I love the evolution of them. And it’s not just video games, it’s films, too. People in general are becoming better storytellers, I believe. People are understanding the process even more. A lot of people who have never been part of making a movie are starting to understand what goes into it. A lot of people are doing stories on their phones, they’re starting to understand comic timing. It’s really interesting to see the way storytelling’s evolving. And then there’s these different niches; you can go to a horror convention and there’s the Evil Dead 2 fan base and The Evil Dead one fan base, who thinks it’s far better. You know what I mean, there’s all these niche groups and its fun. I love Comic-Con, you see all these people, I love that there’s Sonic the Hedgehog and The Mandalorian, and they bring these weirds things together.

You alluded in your last interview with us, that you’re never truly done with wrestling. Is there any chance we’ll see you wrestling in the UK, perhaps against STARBURST’s own Sean Only?

[Laughing] Oh gosh, I don’t know. It was such a weird thing, I’d done this movie and we were really excited about it coming out and it literally came out right as the world changed, and literally everyone got benched in that world. I don’t know if I’ll ever wrestle again to be honest with you, I love that it lives within that movie.

Yeah, he said you’d be too scared.

Any good ribs played on you by wresters?  You must have done if you’re one of the boys.

As an ex-wrestler and a wrestling fan, I feel as though what happened in the late ‘90s, you shouldn’t have been put in that position. I feel like the wrestling world owes you an apology, so….. sorry.

No, I’m a big boy, so I don’t need any apologies or anything. I love the experience of acceptance, but when the wrestling movie came out, WWE, AEW, no one wanted anything to do with me still [laughs] so…

When Scream comes out they will

Oh gosh, I don’t know. It’s such a painful thing, when you get a little distance from it, you’re like, “it’s probably alright that I’m not gonna wrestle again”. There are some pains that you go through and the sense memory of them, I think about certain things like breaking a rib and then taking bumps on it, it’s just like deep, deep pain.

12 Hour Shift is available on digital platforms from January 25th. You can watch our interview with the film’s director Brea Grant here. 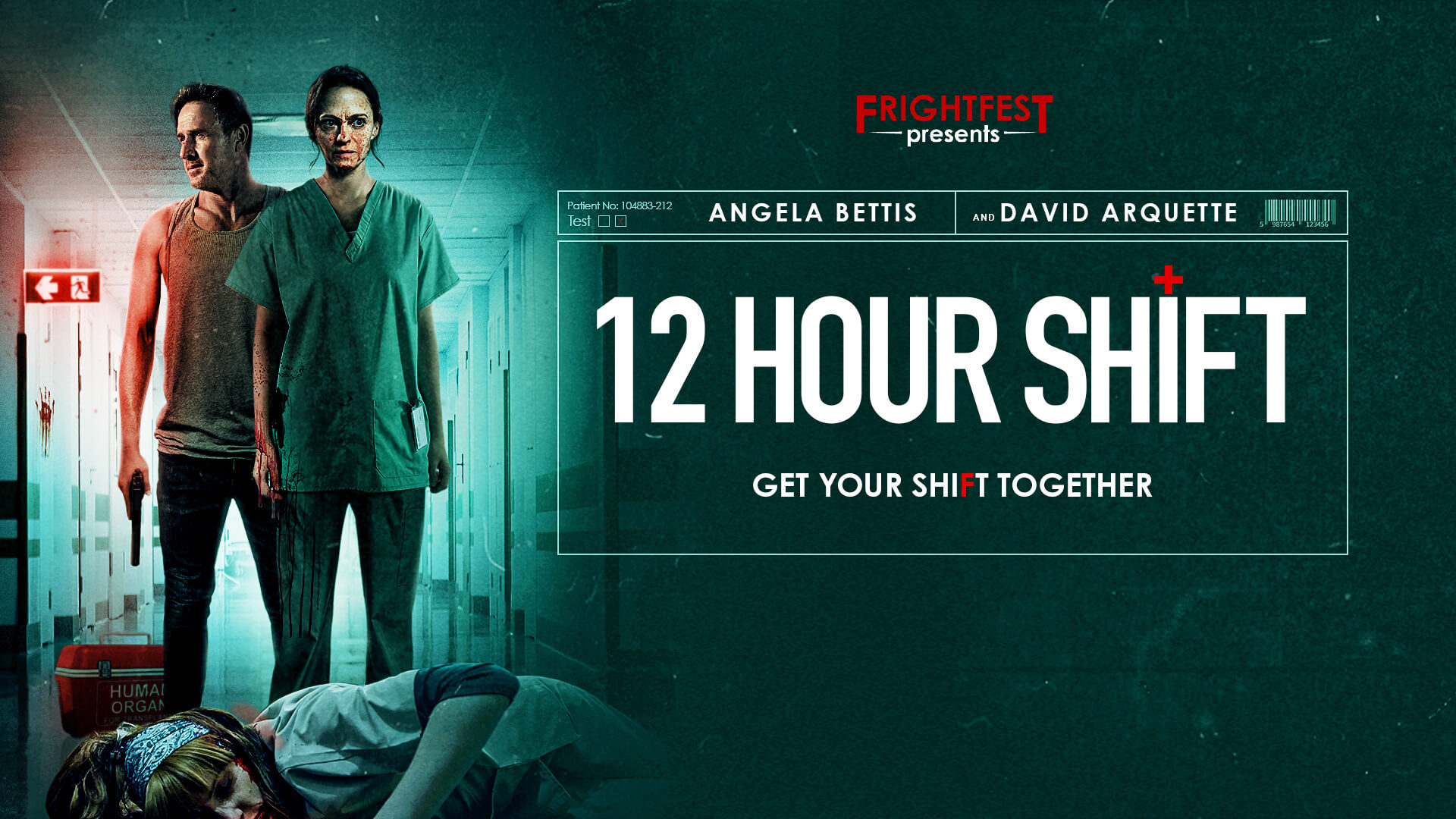