Possessor is a thrilling sophomore feature from writer-director Brandon Cronenberg (son of the legendary David Cronenberg) and stars Mandy’s Andrea Riseborough, Christopher Abbott, Jennifer Jason Leigh, Tuppence Middleton, and Sean Bean. This sci-fi horror follows Tasya Vos (Riseborough), a corporate assassin who uses brain-implant technology to take control of others’ bodies in order to kill her assigned targets. Her latest excursion sees Vos inhabit the body of Colin Tate (Abbott) for a seemingly routine assignment. However, it’s not long until things go awry and she begins to lose control, and her life threatens to unravel around her.

Screening at London Film Festival ahead of its UK release on November 27th, STARBURST spoke with Possessor’s writer-director Brandon Cronenberg about his original concept for the film and its ideas surrounding identity, selfhood, and control. 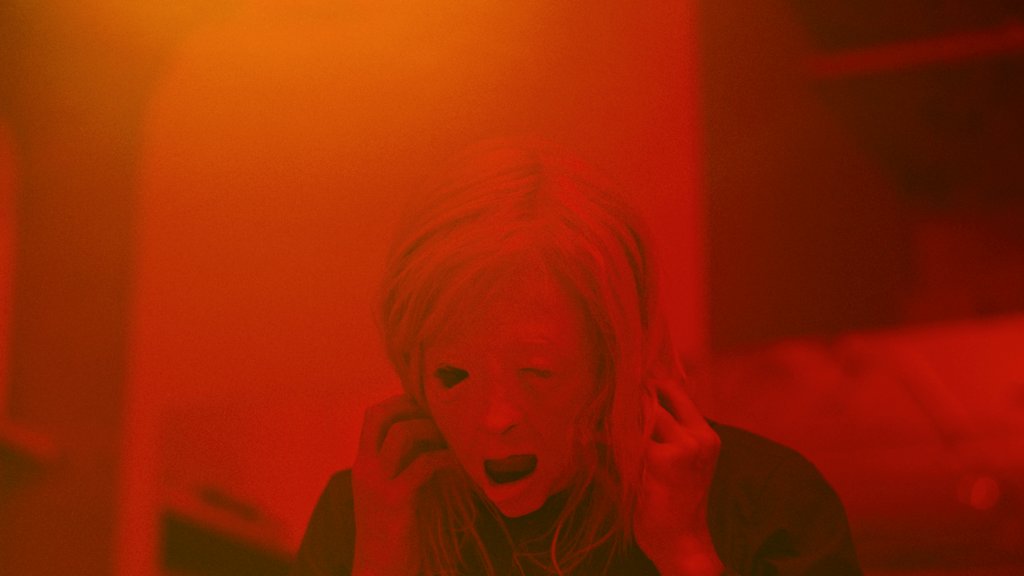 STARBURST: We wanted to start by asking, where did the concept for Possessor originate from?

Brandon Cronenberg: I think it initially came from a trivial, personal place. I was on the press tour for my first feature Antiviral and travelling with a film for the first time was a very surreal experience. You’re constructing this public persona, in a sense, you’re performing a version of yourself, this kind of media-self that then runs off and has its own strange life online without you. So because of that and a couple of other things, I was having a difficult time seeing myself in my own life; I was waking up in the mornings feeling like I was sitting up into someone else's life and having to madly construct a character who could operate in that context. So I initially wanted to write a film about a character who may or may not be an imposter in their own life, and do that as a way of talking about how we create characters and narratives in order to function as people. And then the thriller and sci-fi elements kind of built up from there. The seed of the film was actually in those more dramatic scenes, the relationship and family scenes.

So would you say that Possessor is essentially about constructions of the self, and finding a unified sense of self?

I mean, I think it ended up becoming about a number of things. That was really where it started, about those characters that we perform not only for other people but also for ourselves, that self-image and those personal narratives we build. But other things also crept into it. For instance, the Snowden leaks happened as I was writing, and I was becoming very angry and depressed about the death of privacy through technology. And so that surveillance element also ended up in there.

It’s interesting that the Snowden leaks influenced that exploration of privacy, because conversations around that have found even more traction in recent years. Do you think it has found renewed relevance with concerns around the US elections and accusations of foreign intervention?

I would say so, definitely. Less in terms of surveillance – although there is that – but I think depressingly, it has become more relevant from a kind of mind-control perspective, I think. It's interesting because, as people, we have this idea that we are coherent selves with our own wills and desires, and that we're somehow unified entities. But actually, all human beings are this chorus of conflicted impulses and ideas, some of which come from our own brains, but some of which don't. I mean, there's incredibly interesting science for instance, about the ways that our microbiomes affect our personality, just the fact that we have micro-organisms in our bodies that are partly dictating our behaviour. 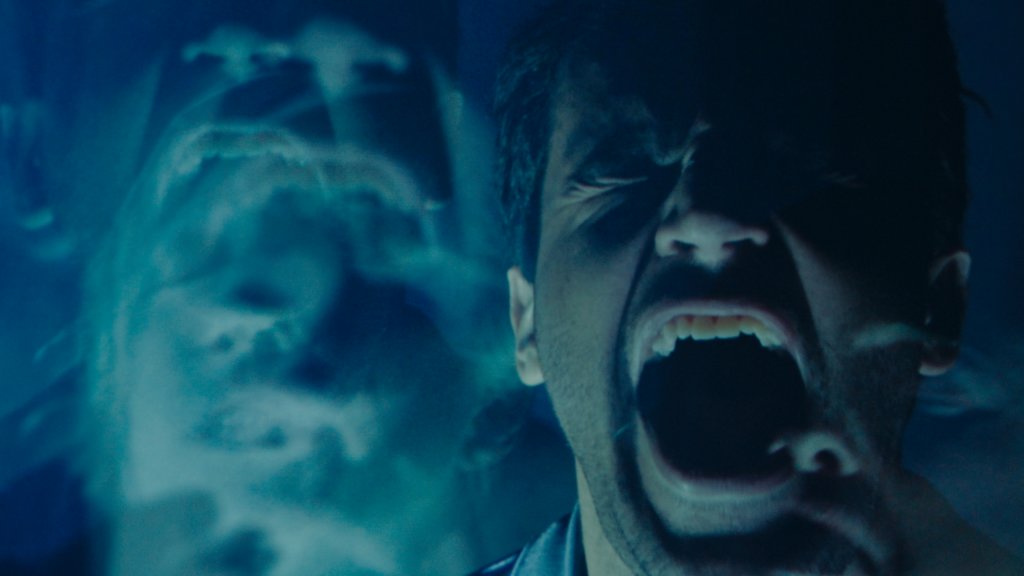 And, of course, we are also affected by what could be considered psychological infections, ideas that we pick up from other people and which end up defining us. And right now, I think we're really seeing the beginnings of how the construction of our online society will dictate the next era of human behaviour – foreign interference in elections being just one example. I mean, there are many people who feel that they are operating as motivated by their own ideas, but their own ideas have actually been carefully crafted by foreign governments… which in another era would have sounded like a completely insane conspiracy theory! But that's actually just daily life right now, and I think we're only just starting to understand the repercussions of being in an online society.

How would you then define this idea of ‘the self’ in modern society?

I think it is a vague concept. I was looking into the neuroscience behind the kind of brain control aspects of the film, and although I don't think this technology is actually around the corner, it is rooted in real neuroscience. In particular I was looking at this Dr. Jose Delgado who was a Spanish doctor working in the US in the 50s, and 60s, and he was doing experiments where he would put actual wires into people's brains and then stimulate parts of their brains electrically, and found he could control a very wide range of behaviour and emotion. Alarmingly, not only motor function but also emotional and other behavioural functions. There is one experiment he described in his book, where he would press a button to activate the brain implant in a particular subject and, because of that trigger, the subject would get up from his chair, walk around it and then sit down. And every time the button was pressed, he would go through the same motions, but every time he did it, he would decide after the fact that he had done it of his own free will, and come up with an explanation for it. For instance, he would say, “I was looking for my shoes,” or “I heard a sound from the other room”.

And so it was like the subject’s brain had decided, after the action was performed, that it had been generated internally rather than by this implant. I think that that function of the human brain, the one that allows someone to claim ownership over certain ideas and certain actions is, first of all, very philosophically interesting, but I also think it's at the heart of what we're seeing with a lot of social media. People are deciding something came from them, even though it didn't, because that's just how we generate our ideas of ourselves. 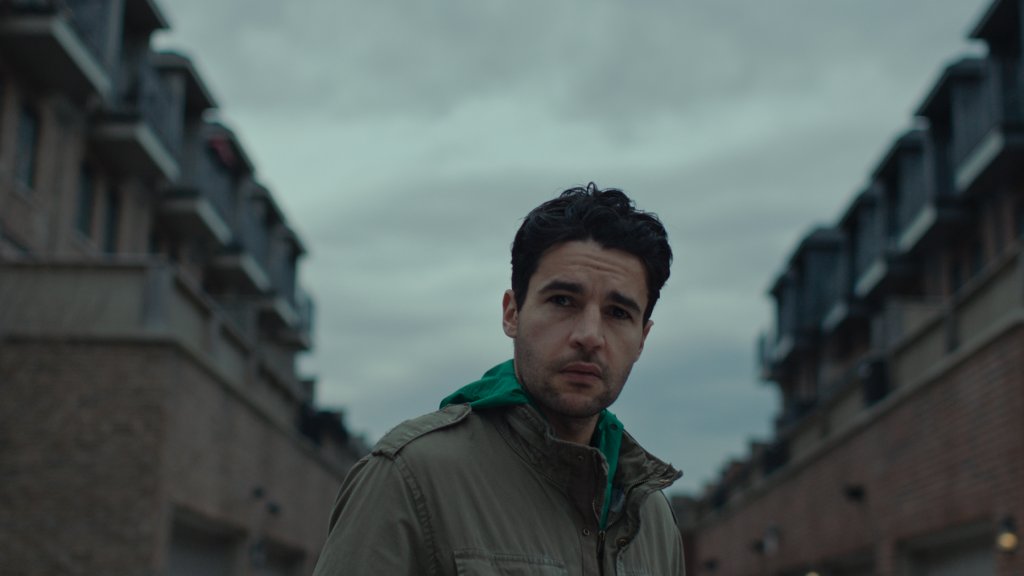 You’ve touched on this already, but how do you think modern technologies are transforming our ideas of humanity?

Absolutely. I mean, again, I think it really comes from being online constantly. We're constantly exposed to information through our phones – not to sound like an old person! But we're carrying around these devices all the time which are, for one, plugging us into a constant stream of information, but are also being used to tailor that information in order to affect our behaviour. And so who we are is this process of push and pull, where we’re contributing to this online community but we’re also being very, very affected by it in some very nuanced ways. The part of the film where they're looking through people's webcams to see what kinds of curtains and blinds they own, and to then use that for commercial data mining purposes, that’s a joke in the film. Yet it's only kind of a joke because we really are having our privacy violated in incredibly invasive ways, all for incredibly mundane reasons. So much of it is just about money and selling us things.

Possessor works as commentary on modernity and technology, but it also explores more organic ideas of the self – for instance there’s a fascinating scene in which Vos, in her otherwise female-presenting body, is seen with an erect penis instead of a vagina. Can you talk a little about exploring that relationship between gender and identity?

I think that if you're someone who jumps into other people's bodies, gender becomes incredibly complicated and fascinating. And sex becomes incredibly complicated and fascinating, because who we are is so rooted in our bodies, and not just our ideas of self but also in a basic, physical way. So of course, if you're jumping into the body of someone who's of a different biological sex, you're going to be having a complicated relationship with that body; you're experiencing a very different kind of physicality, but you’re also experiencing all of the cultural elements of gender that come with it. And I think Chris's performance was very interesting because he was playing with those moments of being more female or more male, depending on how much of Tasya’s personality was coming through. And the shot with the penis was because I wanted to find a point in that scene where Vos was losing herself in Colin, not just physically but psychologically. She was Colin in that moment, and then suddenly also having this sense of her own self; that kind of disconnect between who she was, who she is within him and who he is, in this very physically intimate moment, that’s fascinating.

Possessor has an R-rated version and an unrated, uncut version. That was partially because of those sex scenes we’ve just mentioned, but also because the film features its fair share of graphic violence. Why was it important for you to keep that violence in the film, even as it meant a higher rating?

For the most part, the uncut version is fortunately the lead version of the film; I think the violence in the film is very narrative. So much of Vos’ character is about her relationship with violence, and the evolution of that relationship. So, for me, part of that is the need to communicate her experience of violence in a visceral way, because it has so much to do with her emotional and psychological state. I think the audience needs to connect with her on that level; and if they’re horrified, that’s important too. That’s part of her character, part of her relationship with her work. And the violence also really tracks with her psychology: sometimes it's more observational, sometimes it's more tactile, sometimes it's a memory that's very stylized because she's looking back at it. That violence is so essential to the film that I didn't want to tone that down for the sake of ratings.

And similarly, what inspired the use of body horror to visualise Vos’ consciousness taking over Colin’s?

I mean, when you have a scene where someone's consciousness is remotely invading another person's body, how do you communicate that in a way that allows the audience to feel it? Those scenes were in many ways about trying to visualise something that's very hard to imagine. Not only because the technology is imagined, but because the concept itself is something that's so abstract. Those scenes were an attempt to make it more concrete.

We just wanted to finish by asking you about what future projects you might have in the works?

I have two films that are fairly far along in development right now. One is called Infinity Pool, which is a kind of tourist resort satire with some sci-fi horror elements, and the other is a trippy space horror film called Dragon. I hope to shoot them back-to-back as soon as I get a chance.

You're definitely speaking our language there. Thank you so much for your time.

POSSESSOR releases in cinemas from November 27th, courtesy of Signature Entertainment, or catch it as part of the BFI's London Film Festival on October 16th, 9pm.